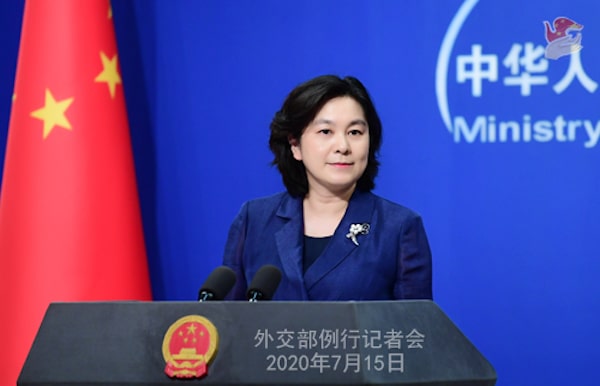 Global Times: U.S. National Security Adviser O’Brien said the following in an article published by the Washington Post on July 13: “Under Marxism-Leninism, the self-proclaimed ideology of the Chinese Communist Party, individuals do not possess inherent value. People are merely a tool to achieve the ends of the collective nation-state”; “The details of the CCP’s anti-Uighur campaign are heartbreaking, but they reflect the Marxist-Leninist disdain for individual human beings”; “As long as these human rights violations continue, the Trump administration will respond.” What’s your comment?

Hua Chunying: O’Brien should really read up on Marxist-Leninist works. The people’s position is the fundamental political position of Marxist parties. People are the creators of history and the true driving force behind historical progress. This is the most basic concept in historical materialism. The CPC represents the fundamental interests of the vast majority of the Chinese people, seeks to advance their interests and serve them heart and soul. It is a party by the people and for the people. It puts people front and center in all its work. People’s interests are its guiding compass. That is why the CPC has maintained the satisfaction rate and support rate higher than 90 percent for many years. The CPC leadership has enabled China to grow into the world’s second biggest economy without resorting to warfare, colonialism or slavery, which is unprecedented in the past decades. The CPC puts people and lives first. In stark contrast, the U.S. parties put selfish political gains and capital first. This has also enabled the Chinese people, led by the CPC, to achieve major strategic success in fighting COVID-19 as one united nation. People’s lives and health have been protected to the maximum. However, the death toll in the U.S. is still climbing. For every new count, a living and breathing human life is lost. This is heartbreaking.

As for Xinjiang-related issues, we have said many times that what some people in the U.S. have said about Xinjiang is the biggest lie of this century. The so-called allegation that “millions of Uyghurs were detained” was trumped up by an anti-China organization which receives significant financial support from the National Endowment for Democracy, and Adrian Zenz, a senior fellow in a research group on Xinjiang education and training centers set up by the U.S. intelligence community. U.S. independent news network has long ago exposed these facts.

Facts speak louder than words. During the past four decades, Uyghur population in Xinjiang more than doubled from 5.55 million to 11.68 million. There is one mosque for every 530 Muslims in Xinjiang, and the total number of mosques is 10 times more than that in the U.S. People of all ethnic groups in Xinjiang lead happy lives. They can breathe freely. Has the U.S. side ever seen such “ethnic repression”? The U.S. also falsely claims that Muslims in Xinjiang live under close surveillance and that more than one million CPC cadres live in Uyghur homes. The truth is, a “Pair Up and Become Family” program has been carried out in Xinjiang, bringing officials to communities to help people address difficulties in employment, education and medical services. In over three years, more than 987 million yuan and 51.12 million articles have been donated and 18.77 million cases that bear on local people’s immediate interests and welfare have been properly tended to. The program has been warmly received by people of various ethnic groups. It is a concrete example showing the deep bond between the CPC and the Chinese people and the Chinese government putting people first with its down-to-earth approach. The U.S. politicians who don’t care for people’s welfare and only care about their own political gains surely cannot understand this.

Now let’s look at the situation in the United States. Racial and ethnic minorities in the U.S. have long been the targets of bullying, exclusion, and widespread and systemic discrimination in the political, economic, cultural and social aspects of their lives. Take Native Americans as an example. For quite a long period of time, the U.S. government had been enforcing a policy of genocide, segregation and assimilation against Native Americans. For nearly a century after its founding, the U.S. was uprooting and killing American Indians in its Westward Movement. The Native American population plunged from 5 million to 0.25 million in the early 20th century. It now accounts for a mere 2 percent of the U.S. population. Another example, African Americans. African Americans have a COVID-19 infection rate five times that of white Americans, and a much higher mortality rate as well. This highlights the racial inequality in the U.S. The recent death of an African American George Floyd and the massive protests that followed once again shows that the systemic racial discrimination in the U.S. has reached a point where racial and ethnic minorities “can’t breathe”. This is truly heartbreaking.

Responding to the various false allegations by the U.S. on human rights issues in China, we have released What’s False and What’s True on China-related Human Rights Matters available in both Chinese and English versions. I brought some brochures here, and you are welcome to take one with you after the press conference. I do hope American journalists will help convey the truth and facts in this brochure to the public in the U.S.