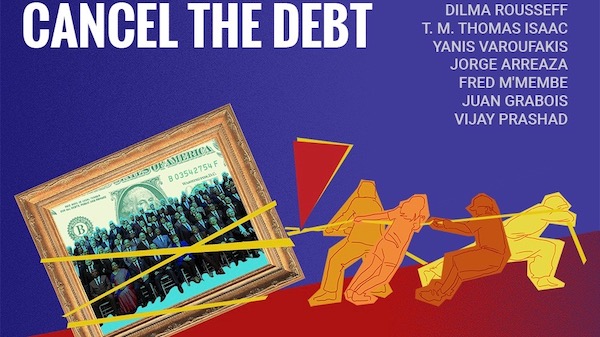 Prominent left-wing politicians and journalists from across the world have issued a joint statement demanding the cancellation of all debts incurred by the developing countries. The signatories to the statement include former Brazilian president Dilma Rousseff, foreign minister of Venezuela Jorge Arreaza and the finance minister of the Indian State of Kerala, Thomas Isaac. They reminded global leaders that “debt suspension or postponement does not provide a foundation for the necessary development” but “merely puts off the reckoning.

In April, after a global campaign in the midst of COVID-19-induced lockdown that was affecting the economies of the developing countries, the G-20 consortium of nations had announced the postponement of repayment of debts till the end of the year 2020. Similar measures have been approved by the World Bank and the International Monetary Fund (IMF). Their partial measures for postponement of debt servicing are however not followed by private lenders, who are left to decide on their individual measures.

The statement highlights that at a time when investment in public healthcare must be prioritized, developing countries will have to pay about USD 3.9 trillion in 2020 towards servicing a total of USD 11 trillion debt accumulated through the years. Given their financial health, these countries will be forced to continue harmful austerity measures recommended by the same lending agencies. This would mean that “developing countries will not be able to efficiently and effectively tackle the pandemic, nor build the systems necessary for future public health emergencies.”

The signatories held the lending agencies responsible for the precarious financial situation in most of the poor and developing countries across the world. The statement noted that external debt “ballooned over the past several decades” and has created a trap, leaving “most developing countries in an unsustainable financial situation.” For these countries, “defaults and debt adjustments seem to be a permanent fixture” for reasons “that are often external to the fundamentals of their economies”.

News of countries such as Lebanon and Argentina defaulting on their debt payments, and several others on the verge of doing so, have been making headlines recently. These countries also have to deal with the fallout of an almost complete halt in economic activities due to the lockdowns imposed to prevent the spread of COVID-19. The economic strain can push millions into poverty and add to their vulnerability until states take major steps to increase social expenditure.

Therefore, “it is time for the cancellation of these odious debts, which cannot–in any case–be paid during the coronavirus recession,” the signatories assert. The statement underlines that such cancellation of debt should not be considered charity because, “both public and private creditors took a risk with their investments” while lending the money to the poor and developing countries and “exploited” their needs “by lending money with obscene interest rates; it is time that they paid the price for the risk that they took rather than force countries with meagre resources to pay out precious capital.”

Other signatories to the statement include former finance minister of Greece Yanis Varoufakis, president of the Socialist Party of Zambia Fred M’membe, leader of the Argentinian Frente Patria Juan Grabois and Vijay Prashad, director of the Tricontinental: Institute for Social Research.