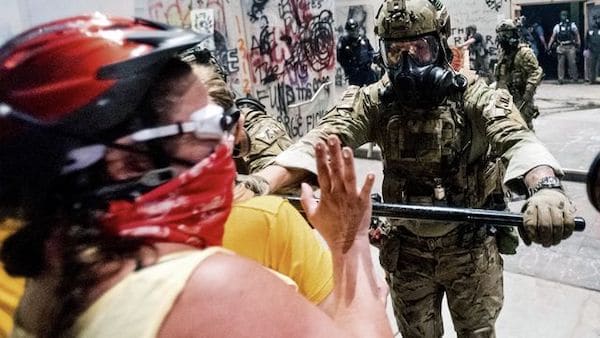 The Trump administration is stepping up its unconstitutional moves toward dictatorial rule, tear gassing antipolice violence protesters in Portland, Oregon and announcing the deployment of federal police to three more cities—Detroit, Cleveland and Milwaukee—in addition to Chicago and Albuquerque, New Mexico.

On Wednesday night, camouflage-clad members of Customs and Border Protection’s “Rapid Deployment Force” once again used CS tear gas, flash-bang grenades and pepper balls against people demonstrating outside of the Mark O. Hatfield Federal Courthouse. This time, the victims of the federal police, who had been diverted from their normal job of carrying out Gestapo-style attacks on immigrants, included Portland’s Democratic Mayor Ted Wheeler.

Wheeler, himself widely despised for his role in unleashing police against peaceful demonstrators, earning him the nickname “Tear Gas Ted,” had joined the hundreds of protesters. He appeared in the crowd in an attempt to feign sympathy and tamp down the seething anger that has been intensified by days of police state crackdowns at the hands of Trump’s paramilitary forces. He was roundly booed when he attempted to speak.

Trump has deployed the Customs and Border Protection (CBP) police, along with other paramilitary units within the Department of Homeland Security, to make good on his threats to “dominate the streets” and put down protests that he denounces as “mob violence” by “radical left” and “anarchist” elements. He has selected Portland, run by a Democratic mayor in a Democratic-controlled state, as part of his attempt to create the conditions for the imposition of a presidential dictatorship based on the police, military and fascistic forces within his political base.

In recent days, CBP paramilitary police, wearing generic camouflage without unit insignia or name tags, have been illegally seizing peaceful protesters in Portland, throwing them into unmarked cars and taking them away for questioning. This has evoked only mealy-mouthed verbal protests from the Democratic Party and its presumptive presidential candidate Joe Biden.

Encouraged by the feckless response of the Democrats and the corporate media, Trump has over the past two days escalated his campaign of violence and intimidation. On Wednesday, he made a joint appearance with Attorney General William Barr to announce the deployment of “hundreds” of federal police and other agents to Chicago and Albuquerque, both run by Democratic mayors.

These officers, mostly from agencies such as the FBI; the Bureau of Alcohol, Tobacco, Firearms and Explosives (ATF); the Drug Enforcement Agency (DEA) and the U.S. Marshals Service, are being deployed on the pretext of fighting violent crime. They are not from the Department of Homeland Security and are under the direction of the local U.S. Attorney’s offices. According to the Trump administration, they will not be deployed on the streets against demonstrators.

While the Democrats have formally opposed Trump’s effective takeover of downtown Portland, filing lawsuits to demand the withdrawal of the federal police, they have agreed to cooperate with the influx of federal police into Chicago and Detroit. Similar groups of federal police had earlier been sent to Kansas City, Missouri.

In his appearance with Trump on Wednesday, Attorney General Barr said the deployments to Chicago, Albuquerque and other cities would be “different than the operations and tactical teams we use to defend against riots and mob violence,” referring to Portland. He added, “And we’re going to continue to confront mob violence,” effectively criminalizing protest activity protected by the First Amendment of the U.S. Constitution.

Barr echoed Trump’s assertion that increasing crime in a number of cities—where malignant social crises and widespread poverty have been dramatically worsened by the impact of the COVID-19 pandemic—is the result of the protests that erupted after the police murder of George Floyd. “This rise is a direct result of the attack on the police forces,” Barr declared.

The quasi-occupations of major cities by forces under Trump’s direct control follow his attempted coup on June 1. On that day, he appeared in the White House Rose Garden to announce his intention to invoke the 1807 Insurrection Act and deploy military forces to suppress the mass protests that had erupted across the country. As he spoke, National Guard troops and other federal forces were unleashed against peaceful protesters outside the White House.

Trump’s plans for a coup d’etat were blocked at that time by the opposition of military brass and retired generals, who feared that such a move had not been politically prepared and would provoke an uncontrollable popular backlash. But as the World Socialist Web Site warned on June 8:

The dangers are very real. The conspirators in the White House have not ceased their plotting. The military is biding its time and considering its options. The police remain armed to the teeth.

Late Wednesday evening, the White House released summary notes laying out some of its plans for further federal police incursions into major American cities. The notes explained that over the next three weeks, large numbers of officers from the FBI, AFT, DEA and other federal police agencies would be deployed to Cleveland, Detroit and Milwaukee.

The Detroit deployment will also include at least 100 Department of Homeland Security investigations officers. Detroit Mayor Mike Duggan, a Democrat, made clear that he was amenable to the influx of federal police, saying,

If you want to talk about extra gun prosecutors in the U.S. Attorney’s office or ATF taking illegal guns off the street, we would support that kind of help.