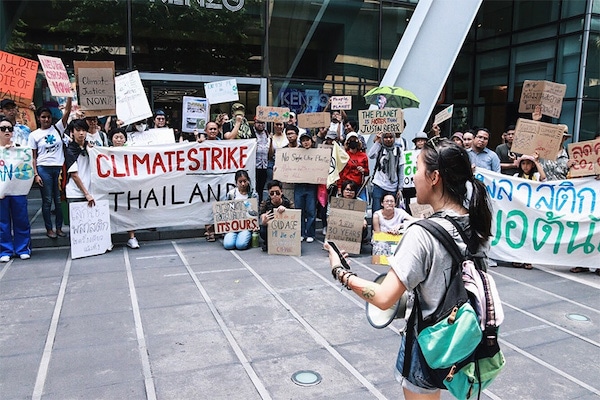 The Global Ecosocialist Network (GEN) is asking its members and affiliated organisations to popularise the idea of a global climate strike coinciding with the COP 26 Conference in Glasgow in November 2021.

To avoid misunderstanding it should be said at the outset that GEN is not itself presuming to call such a strike but we hope to spread the idea and be part of assembling a broad coalition that can issue such a call. Also the idea of a strike in November next year is not counter posed to any actions or struggles that may develop in the meantime but would complement them.

What follows are some comments on why I think this is a good idea and on some of the political thinking behind it.

First, the obvious. The issue of climate change has been overshadowed by the Covid pandemic  but in fact  the scientific evidence shows catastrophic climate change, particularly in the form of bouts of extreme heat, is developing even faster than the experts had predicted and making existing responses even more inadequate than they already were. It is vital that we put this question back at the centre of political debate.

Second, the mere fact that COP 26 was postponed for over a year shows that this issue is not really an urgent priority for the world’s rulers and therefore it is essential to build the mass popular movement to put them under pressure.

So why a global strike? The broad environmental movement will invest a great deal of energy into COP 26 both in terms of trying to exert influence within the Conference and in terms of mobilizing people to be on the streets of Glasgow and at various counter summits etc. But the fact is that the mass of ordinary people in Latin America, Africa, Asia, Oceania and even in Europe, will not be going to Glasgow and the idea of a climate strike offers a framework within which people can become engaged everywhere.

The idea of a climate strike next November provides a strategic goal which we can work towards in a multitude of ways over the next year. There will be innumerable conferences and organising meetings held by bodies ranging from NGOs and Charities (War on Want etc) to Extinction Rebellion and ecosocialist groups to radical political parties in the coming period. The goal of a global climate strike day can be canvassed at all of them in order to build momentum. It is something which, hopefully, everyone except the most conservative wing of the movement can support and combined with numerous other forms of action relevant to particular countries and situations.

Is it possible? It is, of course, by no means guaranteed but it IS possible. In the not too distant past the idea of a global strike on anything, let alone climate, would have seemed outlandish and akin to those tiny left sects that repeatedly called general strikes to zero effect. But times have changed. Most obviously we have seen the inspirational school strike movement launched by Greta Thunberg On 15 March 2019, the schools strikes exploded internationally. Here are some of the high points: Australia–150,000; Germany–300,000; France–195,000; Italy–200,000; Canada–150,000; UK–50,000; Austria–30,000; Luxemburg–15,000; Ireland–16,000. There were also smaller strikes and protests in places as far flung as Reykjavik, Slovenia, Cape Town, Hong Kong and Bangkok. Overall, about 2,200 events took place in about 125 different countries, with more than a million participating worldwide. In 2019 there were strikes in the USA by McDonald’s workers against sexual harassment and prison strikes against unpaid labour. In India in 2016 an estimated 160 to 180 million public sector workers went on a 24 hour general strike against privatisation and government economic policies. It was hailed as the largest strike in history. In Spain on International Women’s Day, 2019, approximately 5 million held a strike against gender inequality and sex discrimination and this strike was initiated by feminists outside the official trade union movement. In the course of the fight for abortion rights there were important right-to-choose strikes in both Poland and Ireland. And there are Black Lives Matter strikes planned for the U.S. on 20 July.

The proletarianisation of white collar work, the globalisation and multicultural diversification of the working class has facilitated the adoption of the quintessentially working class form of struggle–the strike–by people a long way from the traditional stereotype of the industrial worker.

How to spread the idea? The eventual success of this idea depends on it seizing the imagination of significant groups of workers and school and college students and there is no way of ensuring that happens but there is a great deal that GEN members and affiliated organisations can do to assist this process. As a collective we will approach Greta Thunberg and ask her to endorse and even call the strike. There are a number of other key individuals who we can approach in a similar way.  In addition we can approach significant groups and players at national and local levels–Fridays for Future groups, Extinction Rebellion groups, college students, teachers and their unions, other local and national trade unions and many others.

If we do not succeed, the whole process of popularising the idea of an international climate strike will in itself be a benefit for our cause. If a significant global strike does occur this will be a huge step forward for ecosocialism and in the direction of the kind and scale of movement that will be needed to halt the drive towards climate disaster and barbarism.