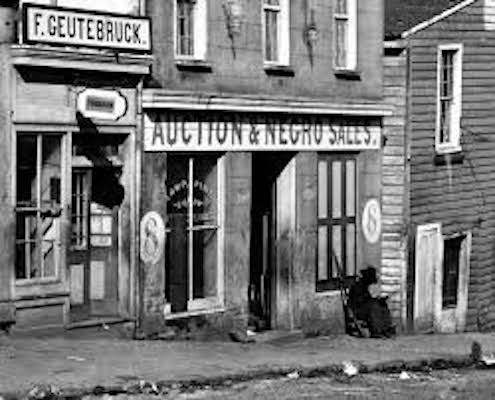 Slavery in the United States – Wikipedia

Arkansas Republican senator Tom Cotton, widely seen as a possible presidential candidate in 2024, aims to prohibit use of federal funds to teach the 1619 Project, an initiative that reframes U.S. history around August 1619 and the arrival of slave ships on American shores for the first time.

In support of his legislation, Saving American History Act of 2020:

“The entire premise of the New York Times’ factually, historically flawed 1619 Project … is that America is at root, a systemically racist country to the core and irredeemable,” Cotton said, “I reject that root and branch. America is a great and noble country founded on the proposition that all mankind is created equal. We have always struggled to live up to that promise, but no country has ever done more to achieve it.” He then added: “We have to study the history of slavery and its role and impact on the development of our country because otherwise we can’t understand our country. As the Founding Fathers said, it was the necessary evil upon which the union was built, but the union was built in a way, as [Abraham] Lincoln said, to put slavery on the course to its ultimate extinction.”

Nikole Hannah-Jones, who was awarded this year’s Pulitzer Prize for her introductory essay to the 1619 Project tweeted:

If chattel slavery–heritable, generational, permanent, race-based slavery where it was legal to rape, torture, and sell human beings for profit–were a ‘necessary evil’ as Tom Cotton says, it’s hard to imagine what cannot be justified if it is a means to an end.

Imagine thinking a non-divisive curriculum is one that tells black children the buying and selling of their ancestors, the rape, torture, and forced labor of their ancestors for PROFIT, was just a ‘necessary evil’ for the creation of the ‘noblest’ country the world has ever seen.

So, was slavery foundational to the Union on which it was built, or nah? You heard it from Tom Cotton himself.

More lies from the debunked 1619 Project. Describing the views of the Founders  and how they put the evil institution on a path to extinction, a point frequently made by Lincoln, is not endorsing or justifying slavery. No surprise that the 1619 Project can’t get facts right.

Senator Cotton is determined to prove the truth of Frederick Douglass that “to make a contented slave, it is necessary to make a thoughtless one. It is necessary to darken his moral and mental vision, and, as far as possible, to annihilate the power of reason.”