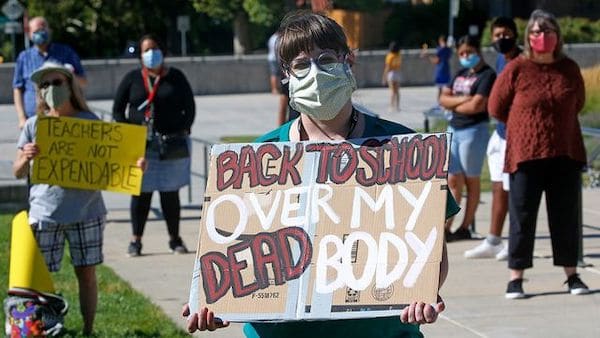 Under conditions in which the coronavirus pandemic is raging out of control, the Trump administration is escalating its homicidal campaign to reopen schools across the U.S., which is guaranteed to spike infection rates even further. At a press conference Friday, White House Press Secretary Kayleigh McEnany branded teachers “essential workers” akin to meatpackers, one of the sections of the working class most devastated by the pandemic.

Our meatpackers were meatpacking because they were essential workers… And we believe our teachers are essential.

The comparison between teachers and meatpacking workers is highly significant and must be taken as a sharp warning by teachers and all education workers.

Since the start of the pandemic, meat processing plants have seen among the highest rates of infections and deaths of any industry in the U.S. In late April, following a series of walkouts and job actions over unsafe conditions, which forced the closure of 22 plants across the country, Trump invoked the Defense Production Act and deemed meatpacking plants “critical infrastructure,” requiring them to stay open. As a result, the number of cases and deaths have tripled, with well over 30,000 workers infected and more than 100 killed by the virus.

In drawing this comparison, the White House is putting teachers on notice that they intend to carry out the same dictatorial measures should there be organized strikes or mobilizations to prevent the reopening of schools.

While branding teachers “essential,” McEnany defended the deployment of at least 200 federal agents to Portland, Oregon, where they have brutally repressed peaceful protesters, in multiple flagrant violations of the Constitution. Last week, Trump threatened to deploy 75,000 agents to “any of the cities” that he chooses. The ultimate target of these shock troops is the working class, including educators, meatpackers, autoworkers and more, who are being forced to sacrifice their lives for corporate profit.

For the financial oligarchy, reopening the schools is a linchpin in the broader campaign to “reopen the economy,” which in essence is the drive to extract ever-greater surplus value from the working class in order to pay for the mountains of debt accumulated through the bailout of Wall Street in the CARES Act.

With high rates of absenteeism in auto factories and other workplaces due to the lack of childcare, schools are “essential workplaces” to herd workers back into their workplaces so the ruling class can resume the extraction of profits. The lowering or cutting off of the $600 a week federal addition to state unemployment benefits is similarly aimed at forcing workers back to work, regardless of the dangers they face.

The number of new COVID-19 cases across the U.S. has been continually on the rise since early June, after states lifted their final social distancing restrictions and reopened the majority of businesses. Record numbers of new cases have been repeatedly set in recent weeks, with Friday seeing a record 78,000 new cases. The number of daily new deaths has also steadily risen, reaching over 1,100 four times last week.

As part of the drive to restart production and reopen the schools, the Trump administration is hell-bent on suppressing public health experts and falsifying medical science. Following weeks during which Trump has publicly denigrated Dr. Anthony Fauci, the director of the National Institute of Allergy and Infectious Diseases, Dr. Fauci stated last week that he and his family have received death threats and harassment during the pandemic.

At Friday’s press conference, McEnany repeatedly referred to the guidelines on reopening schools issued by the Centers for Disease Control and Prevention (CDC). In response to Trump’s recent criticism that the original guidelines were “very tough and expensive,” the agency issued a statement last Thursday which represents the subordination of science to the profit interests of the ruling class.

Titled “The Importance of Reopening America’s Schools This Fall,” the statement declares,

the available evidence provides reason to believe that in-person schooling is in the best interests of students.

The statement falsely claims that “the rate of infection among younger school children, and from students to teachers, has been low.” In fact, one of the most comprehensive studies on the impact of the virus on youth was published the week prior on the CDC’s own website and came to the exact opposite conclusion. The study, conducted in South Korea, involved the contact tracing and testing of nearly 60,000 people who had contact with 5,706 COVID-19 patients, and the results “found the highest COVID-19 rate for household contacts of school-aged children.” The study warned that “young children may show higher attack rates when the school closure ends [in South Korea], contributing to community transmission of COVID-19.”

The CDC also downplayed the dangers posed to children despite increasing evidence to the contrary. “The best available evidence indicates if children become infected, they are far less likely to suffer severe symptoms,” the CDC declared.

Infection rates are skyrocketing among youth in the regions hardest hit by the virus. In Tennessee, there have been almost 4,000 cases for children ages 0-10 and an additional 9,600 for those ages of 11-20. In Mississippi, more than 4,900 children have tested positive for COVID-19.

In Florida, over 23,000 minors have tested positive, with an elevated positivity rate of 13.4 among children who have been tested. On July 17, nine-year-old Kimora Lynum succumbed to the virus, despite having no pre-existing health issues. She collapsed from a high fever after being released from a hospital, becoming the fifth and youngest minor to die from COVID-19 in Florida.

Asked on CBS’s “Face the Nation” Sunday why the CDC had not set a specific benchmark for the reduction of infection rates before schools could reopen, Health and Human Services Secretary Alex Azar said, “We don’t believe that there are uniform thresholds for school reopenings.” The former pharmaceutical executive added,

Each community is going to have to make the determination about the circumstances for reopening and what steps they take for reopening, but the presumption should be we get our kids back to school—and we figure out how to make that happen.

Leaving decision-making in the hands of local authorities, who have also been threatened with the loss federal funds if they remain closed, is a recipe for disaster. There are over 13,000 school districts across the country, and each one is being told to prepare its own reopening plan, creating a highly chaotic and haphazard patchwork of plans. Districts adjacent to each other and facing a similar spread of the pandemic can have completely different plans for reopening, underscoring the irrational and unplanned nature of the capitalist response to the pandemic.

Opposition to the reopening of schools continues to mount among parents and educators, with an Associated Press-NORC poll released last week finding that fully 77 percent of Americans are opposed to the resumption of in-person learning. Forty-six percent believe that major adjustments are needed before schools reopen, and 31 percent insist that schools should not open at all. Eighty percent of those surveyed were extremely or somewhat concerned that reopening schools would produce a surge in cases in their community.

Car caravan protests and rallies have been held in a growing number of cities. On Friday, hundreds of educators and parents rallied in Des Moines, Iowa, in a “Drive for Lives” car caravan opposing Governor Kim Reynolds’ plan to reopen schools part-time. The Facebook group “Iowa Educators for a Safe Return to School” has quickly ballooned to nearly 20,000 members less than a month after being launched. In Salt Lake City, Utah, over 150 educators rallied at the state capitol Friday to protest Governor Gary Herbert’s directive that schools reopen next month.

Similar caravans and rallies have taken place in numerous cities in recent weeks, often organized through local and state Facebook groups set up by educators and parents independently of the teacher unions. The American Federation of Teachers (AFT) and National Education Association (NEA) have made it clear they will help the authorities implement their reopening plans. At the same time, they are trying to channel opposition to Trump behind the campaign to elect Joe Biden, who was part of the massive assault on teachers and public education that occurred during the eight years of the Obama-Biden administration.

Both corporate-controlled parties back the back-to-school policy, along with the savage austerity measures that will be imposed on one school district after another. This only exposes the hypocritical claims by the Democrats and Republicans who claim their demand for the reopening of schools is driven by concern over the students’ needs.

The Socialist Equality Party calls upon educators, parents and students to develop a network of independent, rank-and-file safety committees and to fight to unify across districts and states to prepare for a nationwide strike against the reopening of schools. The murderous policy of the ruling elite must be countered with a broad-based mobilization of educators and all workers and the development of a political fight by the working class for socialism and a vast redistribution of wealth to meet social needs, including the right to fully funded and high-quality public education for all. All those seeking to wage such a struggle should contact us today.