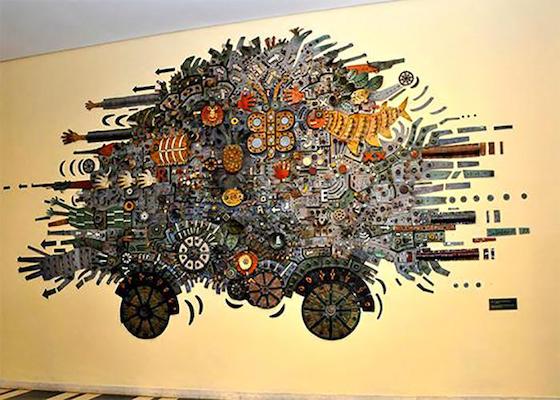 El Carro de la Revolución, by painter and engraver Alfredo Sosabravo, portrays the history of the Cuban people on the road to independence and sovereignty. Photo: Abel Rojas

Just recently, the 59th anniversary of Fidel’s quintessential words to Cuban intellectuals was commemorated. One passage in the speech is particularly noteworthy. Fidel said, and I quote:

He added, immediately thereafter, “This means that within the Revolution, everything; against the Revolution, nothing!” Speeches should not be interpreted independently of the historical moment and the context in which they were delivered, but in these words Fidel addresses a contradiction that continues to be relevant, perhaps one of the most significant faced within a revolutionary process: the complex relationship between the individual and the collective.

Liberalism takes this contradiction to an agonizing level. Stated individual freedoms are a formality and end up being effective only for those who possess economic power, or when they do not directly affect the interests of these powerful groups. The history of social movements on a global scale has shown that individual freedoms, for the historically dispossessed, must be a collective conquest under certain conditions, and that their continuity must be defended over time, also collectively. Where collectives have been splintered, captured, or corrupted, individual rights and freedoms have been brutally swept away, with those affected lacking the resources to defend them. This is what we have seen occurring with the increasingly precarious nature of work over the last decades on a global scale. Today it is difficult to find a job with a minimum of protected labor rights, historical conquests of the working class which are now endangered.

The imperative of valuing the collective leads us to reconsider the individual, which cannot be annulled. The collective must be a vehicle for individual interests to stand a chance of being honored. Thus, personal dilemmas should be placed in the light of a collective context, which is not always simple. Julio Cortázar did this with exemplary acuity when, in March of 1980, at the Casa de las Américas, he said:

I have not hidden from anyone my conviction that at this point the critical horizon should open up more in Cuba, that the media – as some leaders have already pointed out–have not reached the level they could have, and that there are a number of things that could be done and are not being done or could be done better. But I make these criticisms always starting from a sentiment I call the joy of confidence, I make them as I see and live the Cuban Revolution’s great number of positive accomplishments in all fields and, above all, I make them without stupidly anchoring myself in what I am, That is, a writer, not confining myself to the exclusive criteria of the intellectual at a time when an entire people, against all odds, despite errors and stumbling blocks, is today a people infinitely more worthy of its Cuban identity than in the times when it was vegetating under alienating, exploitative regimes.

The people of whom Cortázar spoke are precisely the collective subject of the historical process that is the Cuban Revolution. And when I say people, I am not referring to a homogeneous bloc. To think that way is untenable. The people of Cuba are heterogeneous in their living conditions and in their desires, denying this today makes no sense. What then defines this collective subject that makes itself felt when it marches through the plaza, approves a Constitution or ignores the “opposition” in Cuba? Perhaps a structural consensus continues to exist on the basis of fundamental principles that have been constructed alongside a sense of Cuban national identity (hence its power), through a complex historical process of struggle, resistance, demands, great sacrifice and devotion as the cost of a desire: the sovereignty of the Cuban nation and the defense of a system that is considered more just insofar as it guarantees, in a universal and inalienable manner, a set of collective rights, that is, to all men and women equally, with an effectiveness in this sense has made its presence known these days, saving lives with names and surnames, beyond statistics.

This is the biggest obstacle facing the “opposition” in Cuba. No social mobilization can be triggered by an “opposition” manufactured in Washington, with interests far removed from the collective consensus of Cubans, given that they are connected to the economic interests of power groups with which the people do not identify. In short, there has been no Cuban “opposition” that was not a made-in-USA product. This is not a paranoid view of the enemy; it is a reality recognized within the U.S. itself. The private press and other political actors in Cuba are financed by some of the most discredited and malicious organizations of the international right, and we must be prepared for a context in which this reality becomes increasingly present.

With the rise of social media, the Cuban “opposition” is diversifying its face and we are no longer confronting only groups in Miami that continue to spin a narrative of hate, but also new actors and platforms within the island itself, although trained and supported from abroad. They constantly manipulate symbols that have value within the collective imagination and capitalize on existing social problems. Of course, I am not referring to those who–outside of state media but without foreign financing–are creating valuable materials on the internet reflecting a critical perspective on current Cuban society, which enrich the debate on our reality from Marxist and de-colonialized positions, which contribute and in no way detract.

In the recent period, perception of the right to participate in public decision-making has increased in Cuba: Cuban men and women debate all areas of national life, be it a local architectural decision or one involving the borders of an entire country. There are voices that take advantage of this context to manipulate public opinion in the media regarding state administration and institutional work. We cannot ignore this reality, but it is also true that these manipulators do not have the upper hand. Despite the haters, there is a popular sense of defending the common good. The need for government efforts at the local level to develop mechanisms for greater and more profound popular participation is key. Making a regular practice of consultation, transparency, and the provision of timely information on decision-making processes is imposed as a work philosophy absolutely essential to the development of socialism.

In March of 2020, a national program to combat racism and racial discrimination was announced. The adoption of a Decree-Law on animal protection was approved this year. And it will be necessary to continue creating working platforms to analyze, debate and develop alternatives to resolve problems present in Cuban society today, which will allow for the deepening of the democratic, just character of Cuba’s political system. This cannot be done outside of context of socialism. Capitalism today is exacerbating all of these problems throughout the world. The transition to socialism does not solve these problems naturally or spontaneously, as something inherent, but it does create better conditions for these problems to be analyzed, debated and worked on. Inclusive, transparent platforms for building dialogue and consensus are needed. When the causes are just, they will find a place within the Revolution and its institutions. Perhaps that is what Fidel meant when he said that there was room for everyone in the Revolution.

No one receiving payment from abroad to change Cuba has ever presented a decent proposal to our people. Fighting tooth and nail for Cuban men and women to preserve our lives under adverse conditions, since Cuba is a poor country, without sacrificing our sovereignty in the least, is a proposal worthy of this people. Perhaps that is what Fidel meant when he said everything within the Revolution and nothing against it. Although there are many things, as Cortázar would say, and revolutionaries recognize, that should be done better for the collective good, so individuals have ever greater and fuller possibilities of being.