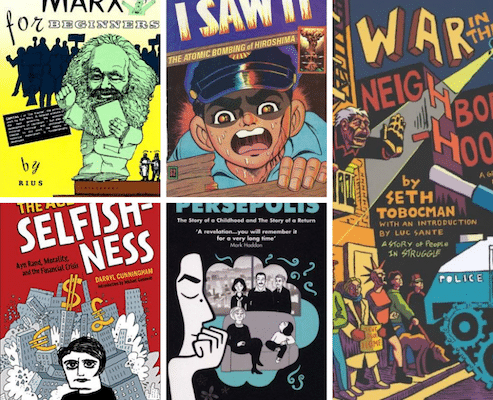 Five graphic novels and cartoons to politicise and criticise

Comics, graphic novels, narrative drawing, illustrated fiction–call it what you like–is a growing arena for serious social and political commentary. Blending words and pictures, art and ideas, the potential for this medium to communicate radical ideas to a mass popular audience is immense but under-appreciated.

In her book, Disaster Drawn, literary scholar Hillary Chute investigates how hand-drawn comics, even in an era saturated with photography and video, can provide a potent form of historical witness. She traces the influences on contemporary comic authors Art Spiegelman, Keiji Nakazawa, Joe Sacco, Marjane Satrapi and others back to fine artists such as Otto Dix, Goya and JacquesCallot.

During COVID lockdown, I hope to review a variety of the most interesting political graphic novels in this and future columns, and that Green Left readers will find something to challenge, entertain and make sense of turbulent times.

Marx for Beginners
By Rius
Writers and Readers Publishing Cooperative, 1972
Available online at the Internet Archive.

Marx Para Principiantes was translated from Spanish into English in 1976 and became a huge success, sparking off the ‘… for Beginners’ series of graphic explainers on countless topics from Einstein and Darwin, to Freud and Postmodernism. These books are still commonly seen in stores with their own dedicated displays.

The book commences with a biographical sketch of Marx’s life. Rius then gives a historical account of western philosophy from pre-historical speculations and the ancient Greeks to the Renaissance and Marx’s dialectical materialism. In looking at earlier thinkers, Rius draws out ideas with radical potential that were to influence Marxism.

The last third explains Marx’s political and economic theories with a detailed analysis of the Communist Manifesto.

Rius’ style weaves simple and whimsical cartoon interludes with longer blocks of detailed text. The reader will surge through 20 pages only to be stopped by a dense page of text from Marx’s Das Kapital.

There is a cut-and-paste, photocopied feel about the book and a self-deprecating humour here that is neither patronising nor overly high-brow.

Although definitely of its time, the ideas are weighty and it still reads well today.

I Saw It: The Atomic Bombing of Hiroshima
By Keiji Nakazawa
Educomics, 1982 (English translation)
Available online at the Internet Archive.

Keiji Nakazawa was just 6 years old when the atomic bomb struck his hometown of Hiroshima. By sheer luck he survived but his father and two siblings were killed, pinned under their collapsed home and unable to be freed before fire destroyed everything. His mother, pregnant at the time and in shock, gave birth, but the baby died due to complications a few months later.

I Saw It, later expanded into the Barefoot Gen series, is sometimes credited as the first example of comics used to document factual events, which went on to influence works such as Art Spiegelman’s Maus.

This first-person account of the events from August 6 1945 onward is utterly unforgettable. Nakazawa’s images use the comic medium to convey the internal and external horror in a way that photography cannot.

Nakazawa’s father was an artist and craftsperson opposed to Japan’s imperial system, known for his left-wing and anti-war views. As a young boy, Keiji was dimly aware of his father’s views, but growing up in the grinding poverty and struggle of post-atomic Hiroshima, his perspective matured and he became determined to make a living as a cartoonist and use his skills and experience to warn the world of the horrors of nuclear war.

Keiji’s first experience of comics was in 1947, reading Osamu Tezuka’s New Treasure Island, the first ever hit full-length graphic novel. Tezuka would soon go on to his greatest success with Astro Boy (Mighty Atom in Japanese).

Nakazawa’s life itself is like an inverted version of Astro Boy. In Astro Boy, a grieving father re-creates his dead son in robot form using atomic power, whereas Nakazawa was a boy who lost his father due to the atomic bomb and seeks to honour his memory by spreading his anti-war message.

Related to I Saw It, is Studio Ghibli’s profoundly moving animation Grave of the Fireflies.

The definitive account of why Hiroshima was destroyed, which was not to avoid the United States a costly ground invasion (as many have been taught to believe) but which was the first blow in the coming Cold War with the Soviet Union, can be found in Gar Alperovitz’s The Decision to Use the Atomic Bomb and the Architecture of an American Myth.

War in the Neighbourhood
By Seth Tobocman
Autonomedia, 1999

New York’s Lower East Side (LES) has had a long association with radical politics of anarchist, socialist or communist persuasions. By the late 1970’s, up to 80% of the area’s housing was abandoned and a squatter movement developed amid gentrification and a growing arts scene.

Seth Tobocman’s War in the Neighbourhood chronicles a period of intense activism and personal struggle of many of the squatters through the Ronald Reagan era up to the mayoralty of Rudy Giuliani.

The New York City Department of Housing Preservation and Development (HPD) was set up in 1978, and took ownership of many LES buildings, ostensibly to turn them into “affordable housing”. Tobocman recounts how ultimately yuppies started moving in and the poor were evicted. The acronym came to mean instead Housing Prevention and Destruction for those opposed to the process.

Battles raged for the rights of the homeless, the right to walk a dog at night in the local park, to not be attacked by police and to not have the abandoned building you called home be demolished.

There are also deeply personal stories with people of many different backgrounds forced together out of the shared need for housing. Problems of drugs, HIV, racial bias, police violence and domestic violence abound. The lyrics of Grandmaster Flash’s The Message come to mind: “Got no money to move out, I guess I got no choice.”

Tobocman’s style is bold, high-contrast, black and white. What it lacks in detail it makes up for in expressiveness. The text is often written over the surfaces of walls, doors, stairs and furniture, as though the locations themselves hold the memories of the events that occurred there.

A strong theme throughout is the difficulty in keeping the peace between different personalities and factions while staying true to one’s principles. The road to democracy and true community is through struggle against oppression, to learn from one’s mistakes and to also know ourselves.

Tobocman is also the co-founder of comics anthology magazine World War Three Illustrated. Collectively run since 1979, and continuing to this day, it features artists with a left-wing focus covering issues such as housing rights, feminism, the environment, religion, police brutality, globalisation and global conflict zones.

Persepolis: The Story of a Childhood
By Marjane Satrapi
Vintage Publishing, 2000

Persepolis is an autobiographical graphic novel detailing the childhood of a young girl growing up in Tehran during the period of the Islamic revolution. “Marji” is the headstrong only child of middle-class parents of Marxist persuasion and who fought against the monarchy of the Shah.

The book begins with a short summary of Persian history, including the CIA organised coup of 1953, which ousted Prime Minister Mossadeq after his government nationalised the oil industry.

Daily events in Satrapi’s life included attending protests that would often end in violence, arrest and release of family friends from jail and state-sanctioned whippings. The revolution takes a fundamentalist turn and reluctantly she starts wearing a veil. The Shah is ousted but the situation becomes more dangerous for her family as Iraq invades Iran, supported by the western powers.

Marji’s experiences feed her growing political awareness, supplemented by her voracious appetite for reading about Palestine, Cuba, Vietnam and Marxism. Her uncle Anoosh, a communist revolutionary, is arrested, accused for being a spy and ultimately executed for his beliefs. Marji’s family begins to worry about her safety and decides to send her to Austria where volume 1 ends. Volume 2 covers her subsequent life in Vienna and then later back in Iran.

Originally published in French, the largest comics market in the world, it has sold millions of copies, translated into over 10 languages and was made into a film in 2007. It has become a popular text in U.S. middle and high-school classrooms, challenging Iranian stereotypes and helping American students understand the west’s legacy of imperialism in the Middle East. This in turn has led to calls for it to be banned in some school districts, which have been successfully resisted by supporters.

The Age of Selfishness: Ayn Rand, Morality, and the Financial Crisis
By Darryl Cunningham
Abrams Books, 2015.

I lived for 18 months in the U.S. and was surprised by how frequently right-wing libertarian author Ayn Rand’s books would pop up on bookshelves or in conversation. Her most popular novels, The Fountainhead and Atlas Shrugged, illustrated her philosophy of selfishness as a virtue and altruism as a moral failing. Darryl Cunningham here explains her influence on neoliberal politics and the current global economic crisis.

The book is divided into three sections: a biographical account of Rand’s life, the events leading to the 2008 economic crisis, and the state of play towards the end of the Barack Obama presidency.

Rand cuts a paranoid and controlling figure. Her first book was made into a film in 1949 but was a critical failure. Nevertheless, she received thousands of fan letters and soon developed a tight clique of obedient followers, one of whom was Alan Greenspan. The book’s mid-section starts at the end of the Great Depression and the passing of the Glass-Steagall Act (1933) which separated retail from investment banking.

Greenspan re-enters the picture in 1987, when President Ronald Reagan appoints him as chairman of the Federal Reserve.

The book sags a bit in the last section in discussing the pros and cons of the “liberal” and “conservative” mindset and defending the many flaws in Obama’s Affordable Care Act but comes good in outlining the threat of the UK Independence Party (UKIP) and the U.S. Tea Party movement. At the time of writing, Donald Trump and Boris Johnson would not have been on the radar.

Cunningham’s text is very readable and his artwork, while fairly simple, adds mood to the story and helps explain the key concepts well.