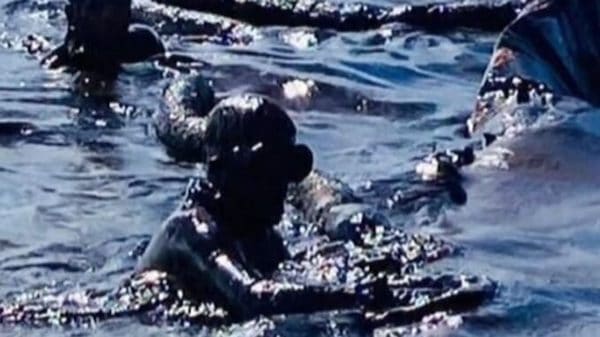 Editor’s note: No sooner had we published an article, ‘The Lebanon explosion is an ecosocialist issue’ (www.globalecosocialistnetwork.net), showing that the catastrophe in Beirut was symptomatic of the general toxic relationship between international capitalism and nature and, specifically, our oceans, than news broke of the disastrous oil spill in Mauritius. Here we publish reports on the Mauritius situation drawn from news reports, as well as Monthly Review journal and social media posts by the ecosocialist organization RezistansekAlternativ.

The Japanese-owned (Mitsui-operated) MV Wakashio was en route to Brazil from China to fetch iron ore from a port owned by the notorious mining company Vale. Here the ship is seen having run aground near Blue Bay, one of the area’s most pristine sites for coral, already threatened by bleaching due to the climate crisis. Now the marine life and fisherfolk must survive this spill.

After nearly two weeks of incompetent Mauritian government inaction and denial, and a lack of action by Mitsui, the waves pounded the ship so hard that it began to crack; here is where much of the 1000 tons of bunker fuel oil is leaking.

In addition to organisingpopular resistance and education about government and corporate irresponsibility, the ecosocialist movement RezistansekAlternativ has a practical approach. Their volunteers have gathered sugar cane straw offcuts and plastic, to create effective 25-meter long booms to prevent the oil from spreading.

Fuel spilling from a Japanese bulk carrier that ran aground on a reef in Mauritius two weeks ago is creating an ecological disaster, endangering corals, fish and other marine life around the Indian Ocean island, officials and environmentalists say.

The MV Wakashio, owned by the Nagashiki Shipping Company, struck the reef on Mauritius’ southeast coast on July 25.

On Thursday, the government said fuel was leaking from a crack in the vessel’s hull and Prime Minister Pravind Kumar Jugnauth declared a state of environmental emergency, pleading for international help.

“The sinking of the #Wakashio represents a danger for Mauritius,” Jugnauth said.

Environmental group Greenpeace said the spill was to likely to be one of the most terrible ecological crises that Mauritius has ever seen.

“Thousands of species around the pristine lagoons of Blue Bay, Pointe d’Esny and Mahebourg are at risk of drowning in a sea of pollution, with dire consequences for Mauritius’ economy, food security and health,” Greenpeace said in a statement.

Satellite images released on Friday showed a slick spreading out into the turquoise waters surrounding the stricken vessel. Some fuel has washed ashore.

The tanker is 299.5 meters long and 50 meters wide and has a crew of 20, it said. It is flagged in Panama with Okiyo Marine, an affiliate of Nagashiki Shipping, listed as the owner.

It is grounded at what the ministry of the environment has described as a sensitive zone with the leaking fuel spreading a black stain in the azure water endangering the diverse marine life that attracts tourists from around the world.

Videos posted on social media showed residents near where the ship was grounded dipping sticks into the ocean that glistened with the black stain of the spilled oil. Also anxious residents and Mauritian ecosocialists have combined to take action. They have mobilized to stuff fabric sacks with sugar cane leaves to create makeshift oil spill barriers “.

Wildlife workers and volunteers ferried dozens of baby tortoises and rare plants from an island near the spill, Ile aux Aigrettes, to the mainland as fears grew that worsening weather on Sunday could tear the Japanese-owned ship apart along its cracked hull.

Residents and environmentalists alike wondered why authorities did not act more quickly after the ship, the MV Wakashio, struck the reef on the southeast coast of the Indian Ocean island on July 25.

“That’s the big question,” said Jean Hugues Gardenne of the Mauritian Wildlife Foundation “Why that ship has been sitting for long on that coral reef and nothing being done.”

This disaster re-emphasises how “Blue Economy” ocean commodification is threatening our African coastlines. John Bellamy Foster spoke in Mauritius in October 2019, and warned:

“In terms of the coral reefs and all the dangers to the ecosystems, Mauritius is one of those countries most at risk. If they don’t stick to the 1.5 degree Celsius target, Mauritius will lose its coral reef and all the fisheries associated with that. Period. The coral reef affords protection in terms of sea levels rising, so there will be that problem that will rear up.

More on that eco-socialist battleground, entailing both critique and activism, can be found here.

Stay tuned, this is a very serious challenge for the activists, as they put increasing pressure on the authorities to take accountability and limit damage, as their Indian Ocean campaigning against the Blue Economy takes on added urgency and universal relevance.

Historical Note: In this context the following historical information from Monthly Review  about Mauritius and its exceptional ecological significance is very interesting and useful. monthlyreview.org

A thousand kilometers east of Madagascar in the Indian Ocean, Mauritius is sometimes known as the birthplace of ecology. It was uninhabited when first discovered—together with the other two Mascarene islands, Réunion, today a French colony, and Rodrigues, part of Mauritius—by Arab seafarers perhaps as early as the tenth century. It appeared on a map with Arabic-sounding names in 1502. It was visited a few years later by the Portuguese, who made it a regular port of call but did not establish a permanent settlement on the island. At the end of the sixteenth century, Mauritius was settled by the Dutch, who, however, abandoned the island about a century later after a devastating cyclone. Shortly after, in the early eighteenth century, the island was colonized by the French. The French East India Company was to make Port Louis its capital in the Indian Ocean and thousands of African slaves were brought to work on sugar plantations on the island. In 1765, the East India Company ceded the island back to the French crown, leading to the appointment of Pierre Poivre as the French administrator of the island. Poivre introduced spice plants and a famous botanical garden. Mauritius was one of the islands, along with St. Helena (see Richard Grove, Green Imperialism: Colonial Expansion, Tropical Island Edens and the Origins of Environmentalism, 1600–1860), where ecological destruction had been particularly severe. The famous dodo, a flightless member of the pigeon and dove family more than three feet tall, was endemic to Mauritius but driven into extinction while the Dutch occupied the island. Mauritius was thought to have experienced climatic change due to deforestation and Poivre began an aggressive reforestation policy in order to stabilize the local climatic conditions.

During the Napoleonic Wars, Britain seized Mauritius and in 1835 abolished slavery in the colony. The British imported indentured servants from India—a system akin to chattel slavery in its sheer brutality. (For a wider sense of how the colonial expropriation of lands and people was tied to ecological destruction, see the Review of the Month, “Capitalism and Robbery: The Expropriation of Land, Labor, and Corporeal Life,” by Foster, Clark, and Holleman in this issue.)

Mauritius gained its independence from Britain in 1968, during which Britain imposed the illegal condition that Mauritius give up the Chagos Islands and forcibly removed the Chagos Islanders—all so that the United States with British compliance could have a permanent military base in Diego Garcia, from which it has launched its recent wars in the Middle East. Monthly Review Press author and close associate Michael Tigar played a key role in the legal appeal to the International Court of Justice, which declared in February 2019 that Britain should return the Chagos Islands to the Chagos Islanders and Mauritius. This decision was followed by a vote of 116–6 in the UN General Assembly evicting Britain and the United States from the Chagos Islands—a decision that those countries disregarded on so-called national security grounds. (See David Vine, “Diego Garcia: Troubling Past, Uncertain Future,” Diplomat, July 1, 2019.)

Ironically given its history, Mauritius is now one of the island nations most threatened by sea level rise, more extreme cyclones, and coral reef destruction, all of which are related to climate change. CARES and the School of Ecology in Mauritius, which brings activists from many African countries, is at the center of ecological resistance in the African and Indian Ocean regions, and is extraordinary for the depth of its on-the-ground critique of capitalism and climate change, which informs its political praxis at every level. All of us at Monthly Review who have visited the island have benefited enormously from what we have learned of the struggle there, while seeking to provide support. We consider CARES’s School of Ecology to be one of the key centers for creative ecosocialist thought and action in the world. (See KashmiraBanee, “John Bellamy Foster—Radical Change Is Coming—Part 2,” Center for Alternative Research and Studies, October 3, 2019.)