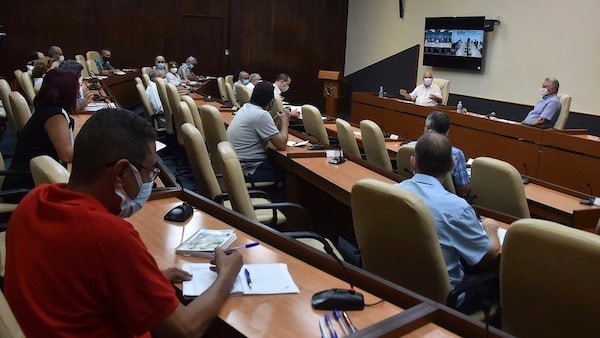 In a meeting with Cuban president Miguel Diaz-Canel, scientists and experts announced that Cuba’s vaccine will be going to clinical trial. (Photo: Estudios Revolución)

In a meeting with Cuban president Miguel Diaz-Canel, scientists and experts announced that Cuba’s vaccine will be going to clinical trial. Photo: Estudios Revolución

Cuba has become the latest country to announce a vaccine candidate for COVID-19. The vaccine candidate, called “Sovereign” is the first to be announced in Latin America and the Caribbean, and is part of Cuba’s long history of medical innovation rooted in humanism and solidarity. In a meeting held with Cuban president Miguel Diaz-Canel, scientists and experts announced that the Finlay Vaccine Institute had received the approvals to start clinical trials. The trial will begin on August 24.

In the meeting, Diaz-Canel said, “The name of the vaccine showcases the feelings of patriotism and revolutionary and humanist commitment which has been put into this work.”

The vaccine project is led by the Finlay Vaccine Institute, along with the Center for Molecular Immunology and University of Havana’s Chemical and Biomolecular Synthesis Laboratory. They have been working since May to develop the drug.

Following pre-clinical studies on animals, the researchers have obtained the necessary authorization from Cuba’s Center for State Control of Medications, Medical Equipment and Devices (Cecmed) for human trials. The first round of clinical trials will begin on 20 people between the ages of 19 and 59. The following week, the vaccine will be administered on 20 more people who are between 60 and 80. A second phase of clinical trials will begin on September 11 with 676 volunteers.

Vicente Vérez Bencomo, the director of the Finlay Institute, said that while the news brings hope, confidence and pride in the midst of a complex situation globally, this is not a moment to relax the measures that the country has taken to successfully confront the pandemic. To date, Cuba has recorded 3,617 confirmed cases of COVID-19 with 3,006 recoveries and 89 deaths. The island has one of the lowest transmission and mortality rates globally. This has been attributed to the robust public healthcare system which guarantees free and quality care for all, as well as strong state infrastructure which has provided economic support to the people who follow isolation measures.

Since the start of the COVID-19 pandemic, Cuba has played a crucial role in the global fight against the virus. It has sent brigades of Cuban doctors and healthcare professionals to over 30 countries to help save lives. Its heroic efforts have been recognized globally and there is an international campaign calling on the Nobel Committee to award Cuba’s Henry Reeve Medical Brigade the Nobel Peace Prize.

Vérez Bencomo said that the primary source of inspiration for the vaccine was the Commander in Chief, Fidel Castro Ruz, “the most impatient, he taught us to look to the future, to dream and to be ready to conquer it, by whatever means necessary.”