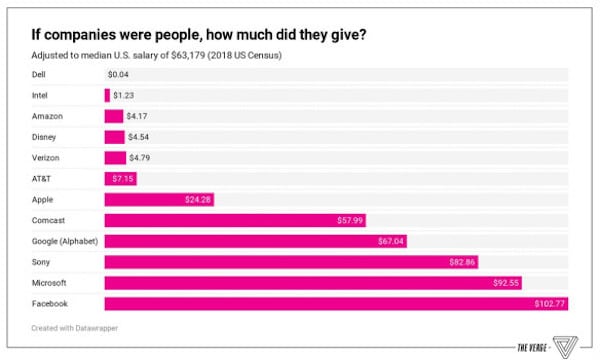 In the month following the May 25th death of George Floyd, the largest technology companies collectively pledged more than a billion dollars in support of racial justice. Sounds like a lot of money, but for these companies it is pocket change. And, despite the accompanying corporate statements of support for structural change to fight racism, there is little indication that they plan to back up their words with meaningful action.

In early June Apple announced the launch of a $100 million Racial Equity and Justice Initiative to “promote racial equality for people of color with a focus on ‘education, economic equality, and criminal justice reform.’” But, as Jay Peters, writing in The Verge, makes clear, the amount doesn’t sound so impressive when you consider Apple’s earnings.

Apple is now the world’s most valuable company. Apple made $6.3 million in profit every single hour in 2019, which means that its initiative cost it about 16 hours of business on one day of the year.

And despite the current recession, big tech appears set to earn more this year than last. “Right now, it’s big tech’s world and everyone else is paying rent,” said Wedbush Securities analyst Dan Ives. “They are consumer staples now and this crisis has bought their growth forward by about two years.”

Combined, Amazon, Apple, Alphabet and Facebook reported revenue of $206 billion and net income of $29 billion in the three months ending in late June 2020. As the New York Times summarized:

Amazon’s sales were up 40 percent from a year ago and its profit doubled. Facebook’s profit jumped 98 percent. Even though the pandemic shuttered many of its stores, Apple increased sales of all its products in every part of the world and posted $11.25 billion in profit. Advertising revenue dropped for Alphabet, the laggard of the bunch, but it still did better than Wall Street had expected.

To put tech company racial justice donations in perspective, Peters calculated what the equivalent giving would be for person earning the median U.S. salary of $63,179. The calculation was based on the size of the corporate donation relative to company revenue, not profits, since the $63,179 is the median worker’s salary and not disposable income. As the following figure shows, recent corporate donations are indeed quite modest. 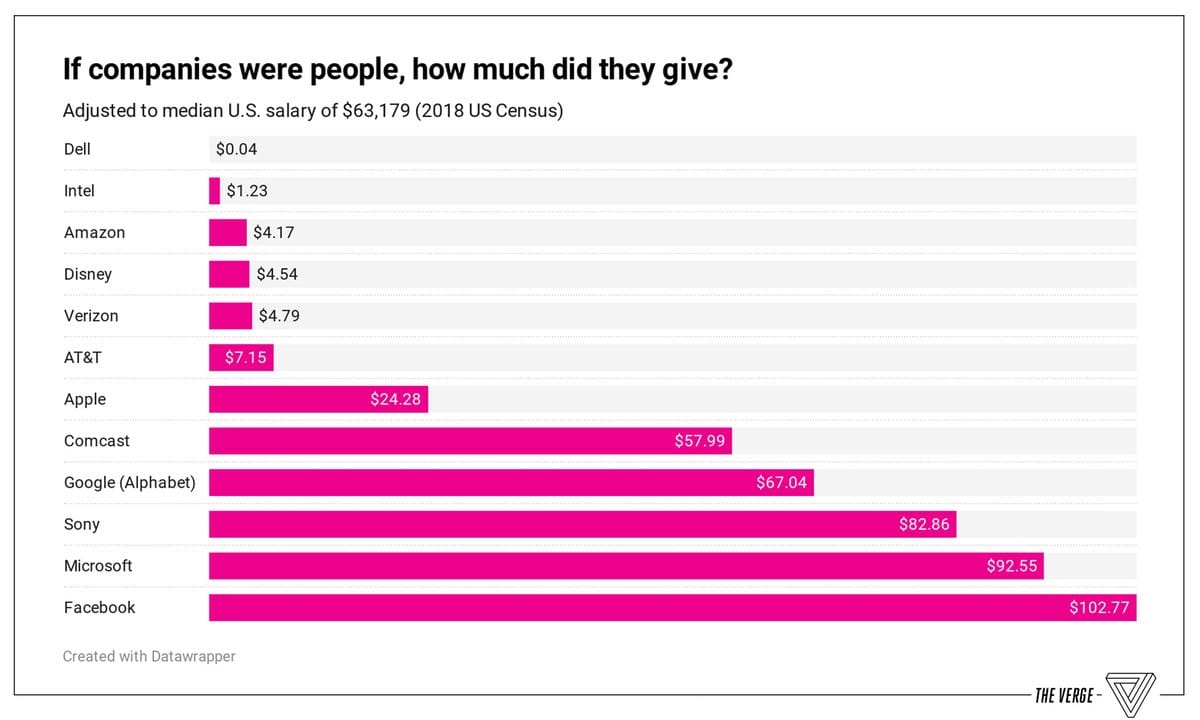 If someone earning the median U.S. salary donated the same percentage of their salary to racial justice as Amazon, that person would be contributing a yearly amount of just $4.17. The median salary annual equivalent donation would also be under $5 for Dell, Intel, Disney, and Verizon. Even for Facebook, the biggest giver, the equivalent would only be $100. It would take Dell 6 minutes to recuperate its pledge, Intel 35 minutes, and Disney and Verizon less than 5 hours.

And as highlighted above, the reason for such modest giving is not low profits. The figure below shows the pledged amount for racial justice by major U.S. tech companies and their annual profit. 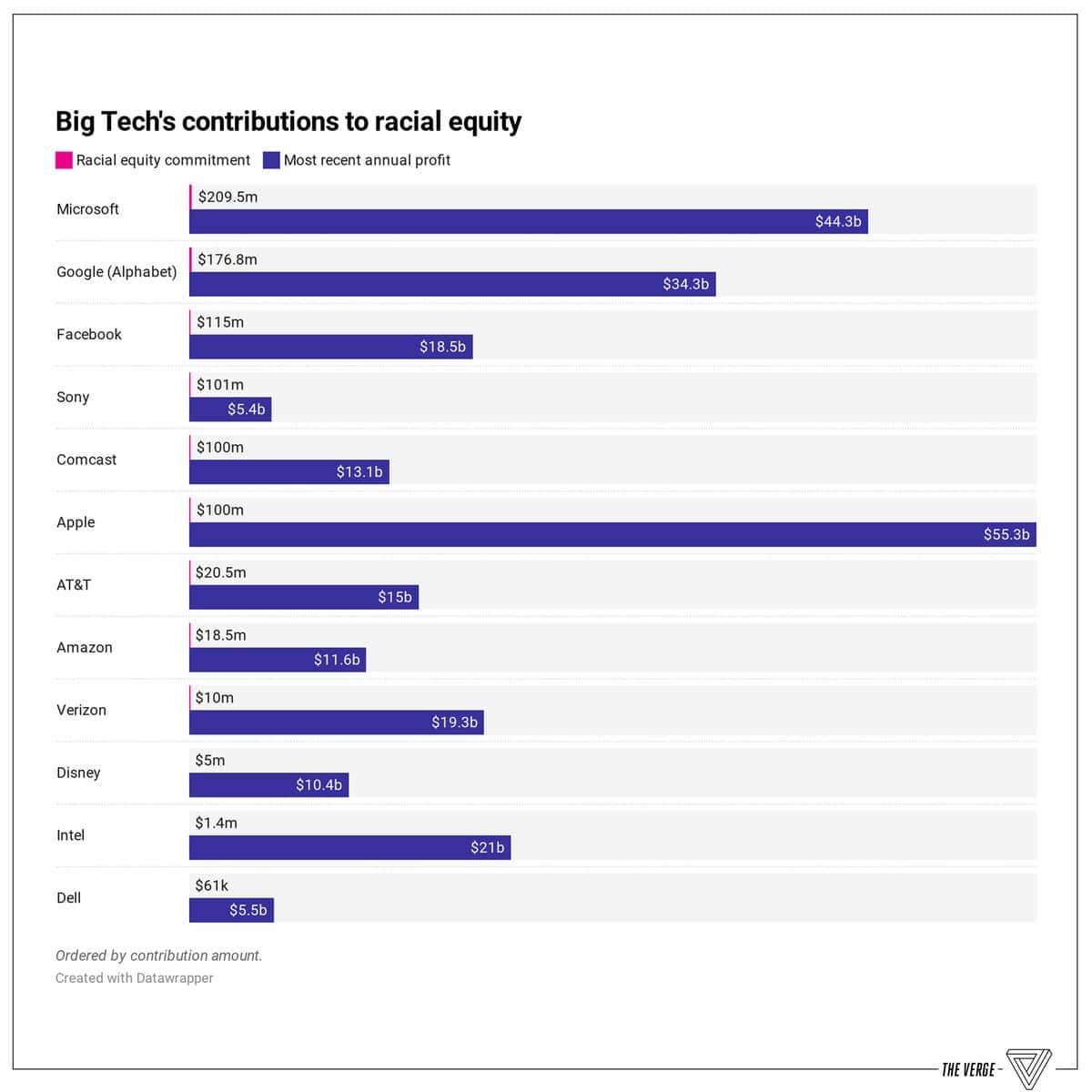 Frankly, a lot of these contributions seem even tinier when you consider how much these companies tend to spend on other things. AT&T reportedly spent $73 million on a single campaign to advertise its fake 5G network, which is more than three times its commitment to Black lives. At $7 to $11 million per episode, Amazon would have been hard-pressed to produce three episodes of its alternate reality Nazi-fighting show The Man in the High Castle with the money it’s pledged since Floyd’s death. Microsoft spent over $100 million trying to reinvent the Xbox gamepad only to wind up nearly all the way back where it started.

Of course, there are other things companies can do to promote racial equality. One is to change their hiring policies. For example, the share of Black employees is just 3 percent at Google and 9 percent at Apple. And beyond increasing numbers, it is essential that tech companies also reconsider how they organize and compensate the work of their Black employees.

An even more important action tech companies could take would be to listen to their workers and BIPOC leaders and reconsider the nature of the goods and services they choose to develop and sell. Johana Bhuiyan, writing in the LA Times, highlights the contrast between corporate statements in opposition to racism and corporate profit-driven production priorities to illustrate what is at stake. Here is her portrait of Amazon:

What [Amazon] said: “The inequitable and brutal treatment of black people in our country must stop. Together we stand in solidarity with the black community–our employees, customers, and partners–in the fight against systemic racism and injustice.”

What the record shows: At the center of the protests demanding justice for Floyd are calls for police reform and an end to racist policing. Amazon has several contracts with law enforcement agencies. Of particular note, Ring, Amazon’s home surveillance company, has partnerships with at least 200 police departments across the country, as Motherboard has reported. As part of its contract with some police departments, Ring incentivized police to encourage citizens to adopt the company’s neighborhood watch app–which has reported issues with racial profiling. After reviewing more than 100 posts on the app, Motherboard found that the majority of people who users deemed “suspicious” were people of color.

“Given the reality of police violence, with impunity, impacting primarily people of color in the United States, these kinds of acts threaten the lives of third parties who are simply, in some cases, doing their jobs or living in their own neighborhoods,” Shahid Buttar, director of grass-roots advocacy for the Electronic Frontier Foundation, told Motherboard.

Amazon also licenses facial-recognition software, called Rekognition, to law enforcement agencies. A study by the MIT Media Lab found that the software performed worse at identifying the gender of individuals with dark faces, although Amazon contested the validity of the findings. Other facial-recognition algorithms have struggled to accurately identify non-white faces.

We shouldn’t forget that it is the strength of the Black Lives Matter movement that pushed corporations to project themselves as supporters of racial justice and make their well-publicized donations. And it is better to have them promoting racial equality than opposing it. But to this point, corporate actions remain largely limited to public relations statements. Since real change will require a fundamental rethinking of the organization and aims of corporate production, we shouldn’t count on CEOs going beyond that in any meaningful sense in the near future. At the same time, as the movement for change grows both inside leading tech companies and in the broader community, we shouldn’t discount the possibility of winning meaningful shifts in corporate policy.