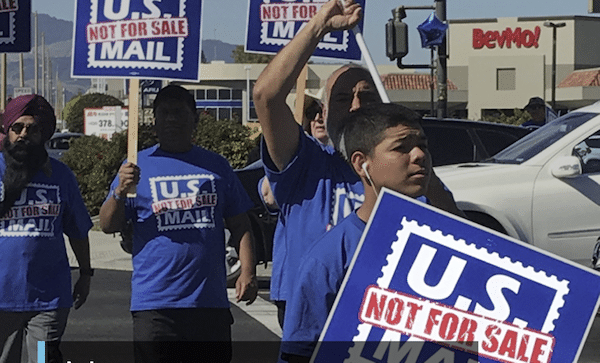 The catchy rhythmic beat of Washington, D.C.’s home-grown Go-Go music was cranked up loud outside U.S. Postmaster General Louis DeJoy’s home in a protest against actions that weaken the post office. The August 23 protest was one of many around the country over the last several weeks as people come together to defend crucial delivery of mail.

The U.S. post office, a target of privatization efforts for years, has been under a renewed attack by the Trump administration as the country heads into a contentious election with charges of fraud, voter suppression, and deliberate sabotage flying.

The president selected DeJoy, a major Republican fundraiser with no Postal Service experience, as the new Postmaster General in spite of DeJoy’s having been on the Board of Directors of XPO Logistics, a large company that does business with USPS and other government agencies. DeJoy was allowed to keep $30 million or more in XPO stock while serving as postmaster general.

DeJoy’s deep ties to private firms that could compete against the post office raised obvious concerns. This might have just been another all-too-frequent type of conflict of interest, similar to Trump’s owning private businesses. It received much more attention when DeJoy instituted organizational changes that appear designed to slow delivery and weaken the post office. This, combined with Trump’s repeated rants against mail-in voting, could easily create an electoral crisis as many people try to avoid crowded polling places during the pandemic.

DeJoy moved quickly after taking office on June 15. Twenty-three executives were either reassigned to new positions or removed, strengthening his power in the organization while also erasing the important institutional memory that workers with decades of experience bring to the organization. He also eliminated overtime work, ordering that any excess undelivered mail should simply be held for later delivery. This, along with removal of on-street mailboxes and mail sorting machines from several post offices has brought charges that the Trump administration is attempting to sabotage the election.

While media attention has focused on threats related to the upcoming election, DeJoy’s actions are part of a longer history of efforts to weaken the post office and realign it to work more as a for-profit business rather than a crucial public service. The ultimate aim, which Trump has called for, is to privatize the agency.

Damage would be enormous

Such a dramatic change would have the Postal Service jettison its historic function of connecting people across the country, destroy a unionized force of truly essential workers, cut wages, and maximize profits. The damage would be enormous. Remote rural communities could lose delivery entirely or else be forced to pay exorbitant, unaffordable fees.

Mark Dimondstein, president of the American Postal Workers Union, is quoted in The Intercept: “Undermining and degrading the Postal Service helps frustrate the customer, which sets the stage to privatizing it. The Trump administration is on record for raising prices, reducing service, and reducing workers’ rights and benefits. This [pilot] may be Trump’s first foray to try and actually accomplish some of those things.”

On Aug. 22, the House of Representatives passed a bill allocating $25 billion to the post office and also banning operational changes that have slowed mail delivery. More than two dozen Republicans joined Democrats to pass the bill 257-150, even though the House Republican leadership and Donald Trump opposed it. It’s highly unlikely that the Senate, controlled by Republicans, will approve it.

Officials seeking to dramatically alter the USPS are aware of its widespread popular support. A Pew Research Center survey released April 9 showed that 91 percent of respondents have a favorable view of the agency. This approval rate is the highest of all federal agencies. DeJoy responded to pushback from protesters and politicians in a statement released Aug. 18 noting that he would suspend operational changes at the Postal Service until after the election in order to “avoid even the appearance of any impact on election mail.”

The corporate news media focus almost exclusively on the current crisis to create an impression of a troubled agency embroiled in political conflict between Republicans and Democrats. A look back to 2006 shows that the post office was severely damaged intentionally in a bipartisan political attack. This came in the form of the 2006 Postal Accountability and Enhancement Act which received bipartisan support.

The Act, signed into law by George W. Bush, mandates that the Postal Service allocate health and retirement funds for employees at least 50 years into the future. No other government agency or private company has been forced to take on such an extreme financial burden. This additional cost–approximately $5,5 billion each year–creates the illusion that the USPS is a troubled, poorly run agency. This in turn can force the agency to cut services, leading to eventual privatization. Almost all Republicans in the House of Representatives and every single Democrat voted in support of the 2006 Act.

Bipartisan attacks and efforts to privatize the Postal Service are similar to ongoing challenges to public education. Both offer unionized employment to essential workers. (The USPS employed just under 500,000 workers in 2019.)

Efforts to undermine and privatize the USPS are not going away, regardless of DeJoy’s assurances. People will always defend this vital work that helps to connect our worlds. The Party for Socialism and Liberation stands with postal workers and honors the essential service they provide our communities far and wide.

Why U.S. political scientists are arguing that Evo Morales should be the President of Bolivia
Struggles in social reproduction during COVID-19: from East to West and beyond