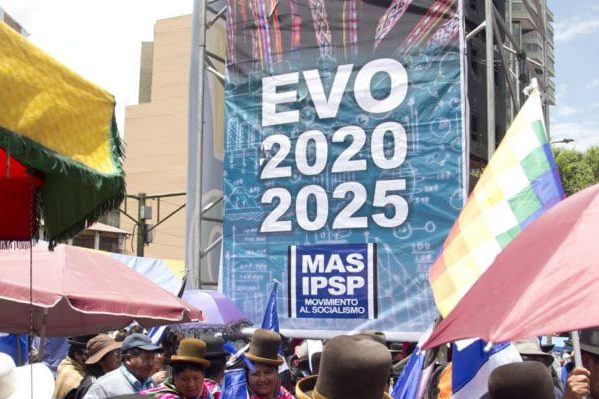 Supporters of Bolivia’s President Evo Morales attend a rally in favor of his reelection, in La Paz, Bolivia, Wednesday, Feb. 21, 2018. Supporters of Morales marched in the 2 year anniversary of the referendum that rejected his bid for another reelection. Bolivia’s Constitutional Court is allowing him to go forward with his run to a fourth mandate. (AP Photo/Juan Karita)

Three political scientists from the United States closely studied allegations of fraud in the Bolivian election of 2019 and found that there was no fraud. These scholars—from the University of Pennsylvania and Tulane University—looked at raw evidence from the Bolivian election authorities that had been handed over to the New York Times. They suggest late-counted votes came from rural regions where the candidacy of incumbent President Evo Morales Ayma was popular; the character of these votes, and not fraud, accounts for the margin of victory announced by the Supreme Electoral Tribunal (TSE) on October 21, 2019.

Allegations of fraud were made most sharply by the Organization of American States (OAS). It is the OAS report that is closely scrutinized by Professors Nicolás Idrobo, Dorothy Kronick, and Francisco Rodríguez, and it is found wanting on statistical and analytical grounds. If what the professors say is correct and if the OAS allegations were incorrect, then Evo Morales should have been serving his fourth term as president of Bolivia rather than be exiled to Argentina. Because Morales was removed from power by a coup d’état, his country’s democratic system is being suffocated by an interim presidency.

What Happened in October 2019

As the Idrobo, Kronick, and Rodríguez study published in July 2020 reports, at 7:40 p.m. on October 20, after the voting ended, Bolivia’s TSE paused the public transmission of the results for the election. The government had previously announced that the transmission would be paused so that the 7:50 p.m. press conference by election officials could be held in a calm manner. At this press conference, the officials said that 83 percent of the voting booths had reported to the central office, and that of these votes Morales (with 45.71 percent) was in the lead over Carlos Mesa (with 37.84 percent). The gap between the two at that point was 7.87 percent, short of the 10 percent margin needed for Morales to avoid a runoff.

The election officials did not publish any more results until the following evening; they said that they had no intention of posting any more results on October 20. On October 21, the officials said that Morales had a lead of 10.15 percent; three days later (on October 24), the Plurinational Electoral Organ announced that Morales (with 47.05 percent) had defeated Carlos Mesa (with 36.53 percent) by 10.52 percent, above the 10 percent threshold. Morales had won the election.

What the OAS Said

At 10:35 p.m., two and a half hours after the TSE held its press conference on October 20, the OAS sent out a tweet asking the TSE to explain why the transmission of results had been stopped. Here begins the mischief.

Days before the election, Bolivian authorities and their contracted firm for providing administration and support during the election—Neotec—had said that they would not be able to publish all the results on October 20 due to the lack of internet connectivity in rural parts of Bolivia. On the day of the election, Marcel Guzmán de Rojas, manager of Neotec, said that it would “take one or two more days” to confirm the official numbers; he had made this point as early as October 9. This simple explanation for the delay was not considered by the OAS or by European and U.S. ambassadors who began to whisper the phrase “election fraud” to the media.

During the break from the transmission of the results on October 20, the Panamanian cybersecurity firm Ethical Hacking that had been hired by the Bolivian government to oversee the process issued a “maximum alert” about activity on the servers. We were told by a former TSE official that Morales’ party—Movement for Socialism (MAS)—had objected to the work of Neotec, which had overseen the Bolivian elections for years; Neotec was hired to do the election five weeks before October 20 at the urging of the opposition.

Neither the timeline laid out by Neotec nor the open evidence of confusion between Neotec and Ethical Hacking entered the mainstream news. The focus was on the OAS tweet from October 20 and the OAS statement of October 21. The OAS statement spoke of its “deep concern and surprise at the drastic and hard-to-explain change in the trend of the preliminary results revealed after the closing of the polls.” There was nothing “hard-to-explain” if Neotec’s own timeline is taken seriously: no final numbers would be released before October 21, and the results followed the already established trendline.

What the Professors Say

The day before the election, the TSE held a press conference where its president María Eugenia Choque said that the system for the transmission of election results was safe. She responded to a news report that anonymously quoted a TSE official who complained that the TSE had hired Ethical Hacking to deliberately slow the process of the transmission down. The TSE tried desperately to defend the integrity of the process, but it was already clear—as many of us knew—that the accusation of fraud was going to be used to overthrow the government of President Morales.

Two U.S. scholars from the MIT Election Data and Science Lab—Jack R. Williams and John Curiel—published a paper in February 2020 that showed no “evidence of an irregular trend.” It was clear to these scholars that the precincts that remained “to be counted already highly favored Morales.” Williams and Curiel found that after the interruption on October 20 “there was no clear change in favor of a single party.” Because of this analysis, Williams and Curiel wrote, “We find it is very likely that Morales won the required 10 percentage point margin to win in the first round of the election on October 20, 2019.”

The new paper by Idrobo, Kronick, and Rodríguez—published in July 2020—went further. It demonstrated two main points. First, building on Williams and Curiel, it argued that the precincts being counted after the pause in the transmission were largely in the highlands of Bolivia and in its rural districts, both areas that favored Morales by a landslide. “The changing composition of voting booths—rather than fraud—explains the pro-Morales shift in vote share over the reporting window,” the more recent paper stated.

Second, looking at the models used by the OAS and others, Idrobo, Kronick, and Rodríguez showed that the jumps found by the OAS were “the artifact of using an estimator not designed for regression discontinuity analysis”; in other words, the statisticians who claim fraud used the wrong analytical framework for their assessment. Looking at one precinct in the town of Llallagua, Potosí, the scholars found that “MAS’s margin increases with reporting time even before the government stopped transmitting updated results.… This is not an isolated case.”

On November 10, 2019, Morales offered an important concession: he announced new elections that would be overseen by a new electoral body. The oligarchy and its parties smelled blood. They were uninterested in strengthening Bolivian democracy. Two hours after the announcement, the commander of Bolivia’s armed forces General Williams Kaliman—trained by the U.S. military—“suggested” that Morales resign.

Morales offered a re-election. It was rejected in place of a coup. There has been no election for a year in Bolivia since the coup.

Manuel Bertoldi is a leader at Frente Patria Grande (Argentina) and Alba Movimientos. He is a coordinator of the International Peoples Assembly.