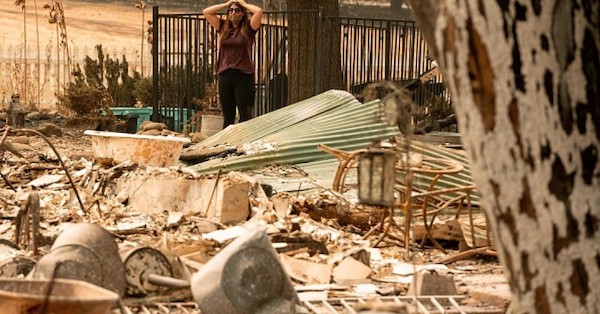 Resident Alyssa Medina reacts while looking over the charred remains of her family home during the LNU Lightning Complex fire in Vacaville, California on August 23, 2020. (Photo: Josh Edelson/AFP via Getty Images)

The social and environmental toll of the unfolding fire catastrophe in California—where over 100,000 people have been displaced, seven have died, and approximately 1.2 million acres have burned since August 15—is incalculable, but hedge fund Baupost Group has found a way to turn the state’s devastating wildfire epidemic over recent years into profits for investors.

The payout yielded Baupost’s biggest profit generator last month and represented a sizable markup from what the firm had anticipated, it told investors Thursday. The fund bought $6.8 billion of subrogation claims against PG&E, court documents show.

Baupost acquired some of the claims at about 35 cents on the dollar, Bloomberg previously reported, so its profit on the trade could have approached $1 billion. But the gains were partly offset by losses on the firm’s equity holdings in the utility company, one of the people said, asking not to be identified because the information is private.

The relationship between PG&E, insurers, and investors such as Baupost began last year. PG&E’s electrical network—rendered vulnerable by a lackluster commitment to risk reduction—has been implicated in multiple fires across California in the past five years. Facing $30 billion in liabilities stemming from a series of fires in 2017 and 2018 that killed over 100 people and destroyed tens of thousands of buildings, the utility company declared bankruptcy in 2019 and announced an $11 billion settlement with a group of insurance carriers and investors, including Baupost.

Insurers sell subrogation claims to investors at a discount because they enjoy the certainty of being paid right away, but in the process they also lose the right to sue to recuperate damages endured by policyholders.

While fire victims across California—and elsewhere in the country—continue to suffer the impacts of increasingly destructive wildfires, the ability of hedge funds to profit from such calamities provoked critics of the financial system and its perverse incentives. In his assessment of a situation in which Wall Street firms have perfected their lucrative approach to disaster management, journalist David Sirota tweeted: