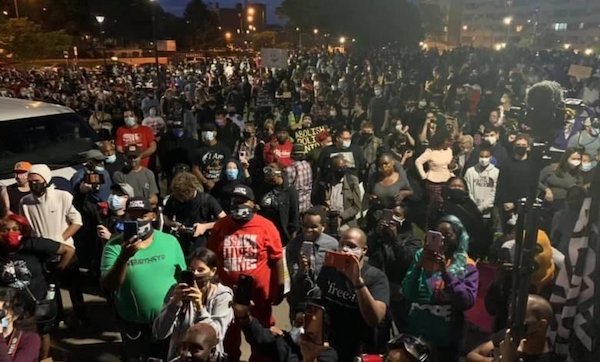 On Sep. 2 a news conference held by Free the People ROC and the family of Daniel T. Prude announced that Prude, a 41-year old Black man, had been killed by the Rochester Police Department on March 30. The Prude family also released police body camera footage, obtained through a public records request, that showed Daniel Prude naked, handcuffed and held face down in the street while a light snow fell. Militant protests started that day and have continued.

In the video, Daniel Prude can be seen wearing a so-called “spit-hood” that RPD placed over his head, though they offered no clothes or even a blanket on the cold March evening. The video footage shows Prude visibly agitated after he is hooded. When he tried to rise, officers pushed his head into the pavement and held him face-down for two minutes. He had to be resuscitated and seven days later, he died. In mid-April, a county autopsy ruled Prude’s death a homicide, finding that Prude had suffered “complications of asphyxia.”

Daniel Prude lived in Chicago with his sister, and had five adult children. He was in Rochester visiting his brother, Joe Prude. Shortly after arriving in Rochester, Joe reports that his brother began behaving erratically, and brought him to the hospital for evaluation, but he was released within hours. Later that night, Joe reported that his brother ran out of the house, barely dressed. Joe Prude called the police for help, but rather than responding with care and professionalism to the mental hygiene call, they killed him.

The body camera footage shows a man, naked and in obvious distress, struggling for air while officers can be heard laughing in the background. “I placed a phone call for my brother to get help. Not for my brother to get lynched,” Joe Prude said at the Sept. 2 press conference. Joe Prude continued: “How did you see him and not directly say, ‘The man is defenseless, buck naked on the ground. He’s cuffed up already. Come on.’ How many more brothers gotta die for society to understand that this needs to stop?”

The City of Rochester and the State of New York covered up Daniel Prude’s homicide for five months, and would have continued covering it up had Prude’s family, with the support of Free the People ROC, not spoken out. When Daniel Prude died, the police did not issue a news release; nor did they release the findings of the county autopsy in April.

In April, the seven officers involved in Prude’s homicide were all cleared of any wrongdoing in an internal investigation, the findings of which were never disclosed. The officers involved were finally suspended–with pay– in response to public outcry and mass protests. Just two days before the Prude family released the body camera footage, the president of RPD’s police union, Mike Mazzeo, said: “We don’t have the problems other parts of this country have. It should start being recognized by the mayor and the city council members. Start talking about what we do here in this city that is right, that should be a model for other areas.” He lied through his teeth, knowing full well that Daniel Prude had been killed by RPD officers in an incident that bears an uncanny resemblance to the killings of George Floyd and Elijah McClain.

Nine activists were arrested Sept. 2, and Free the People ROC called for a mass protest that evening, for the next two days of Sept. 4 and Sept. 5, and beyond. Hundreds of protesters came and gathered peacefully to sing, “Whose side are you on, my people, whose side are you on?” and to chant, “It is our duty to fight for our freedom. It is our duty to win. We must love and support each other. We have nothing to lose but our chains.”

On the night of Sept. 4, after several hours of peaceful protest, when the crowd was crossing the Broad St. bridge into downtown, the police issued an order to disperse and immediately and without provocation began to fire pepper bullets into the crowd, shooting not at the ground but at protester’s heads, injuring several. The people were trapped on the bridge and many were hit by police munitions.

Stephanie Kenific, of the Party for Socialism and Liberation, told Liberation News: “I was in Rochester marching peacefully for racial justice. Police ordered us to disperse and immediately gassed us. We had no opportunity to get out of the way. We were all caught in a wave of pepper spray, and my friend was hit directly with a pepper bullet..” Later in the evening leaders issued a call to leave the streets and get to safety when two protesters were injured by vehicles and armed white supremacists were seen prowling on the streets and recorded pepper spraying protesters from car windows.

On the night of Sept 5, thousands of people poured into the streets again to demand the seven officers responsible for Daniel Prude’s murder be fired and prosecuted. The people demanded the state be held responsible for the cover-up and the unlawful repression of righteous protest, calling for the resignation of the mayor and the police chief. The people demand the defunding of the RPD and the reallocation of resources to mental health services, affordable housing, good jobs, and healthcare.

Protesters, many of whom had been attacked with pepper balls and teargas the night before, were unwavering in their support of one another. Chanting “Who keeps us safe? We keep us safe,” lines of demonstrators with umbrellas protected protesters from police munitions, bike brigades blocked oncoming traffic, and medics treated injured demonstrators.

A little after 10:00 PM on Sept. 5 police again attacked peaceful protesters with munitions, LRAD (sonic weapons), and dogs. Protesters again sprung into action to protect one another. Later in the evening, a group of organizers took sanctuary from the RPD assaults in Spiritus Christi Church. Police surrounded the church, trapping the protesters inside, and fired chemical munitions at the church. Police also destroyed water and other provisions left on the church doorstep. Journalists were attacked. And once again, the people had each other’s backs.