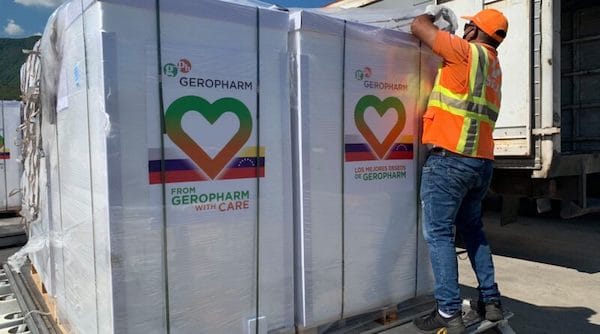 This Friday, a shipment of 850 thousand vials of 4 types of insulin from Russia arrived in Venezuela, being the 8th and 9th delivery within the framework of the Strategic Trade Alliance signed in 2019 between Russia and Venezuela in the International Economic Forum of St. Petersburg.

The Vice Minister for Europe of the Ministry for Foreign Affairs, Yván Gil, explained from the Simón Bolívar de Maiquetía International Airport that the delivery could be made thanks to the agreement signed between the Ministry for Health through the Socialist Company for the Production of Biological Medicines (Espromed BIO) and the Russian company Geropharm.

The ambassador of the Russian Federation in Venezuela, Sergey Melik-Bagdasarov, was present to receive the shipment of the 850,000 vials of insulin.

Geropharm is located in Saint Petersburg and is one of the most modern laboratories known today. This has made it possible to supply more than 2,200,000 insulin vials to patients with diabetes in Venezuela.

Gil indicated that the arrival of the already 50 tons of medical supplies is due to the agreements signed between Venezuela and the Russian Federation within the framework of the High Level Intergovernmental Commission (CIAN).

“We are pleased with the arrival of this shipment, especially for the insulin-dependent population. We will continue working in the midst of the pandemic, in the midst of the worst global health crisis that humanity has known in the last 100 years,” he said.

For his part, the Vice Minister of Resources, Technology and Regulation of the Ministry for Health, Gerardo Briceño, said that the Venezuelan government continues to work and support through international agreements, in order to improve the quality of life of patients despite the economic blockade and U.S. sanctions imposed against the country.

“It is not just the supply of insulin, but the possibility at some point of having its own insulin production in the country,” added Briceño.

During the arrival of the shipment, the authorities explained that the objective of the alliance is to achieve cooperation in supply, registration, commercialization, distribution, quality control and implementation of pharmacovigilance, technology transfer of finished pharmaceutical forms of human insulin and analogues of human insulin (filling and formulation of human insulins) between Geropharm and the Ministry of Popular Power for Health.