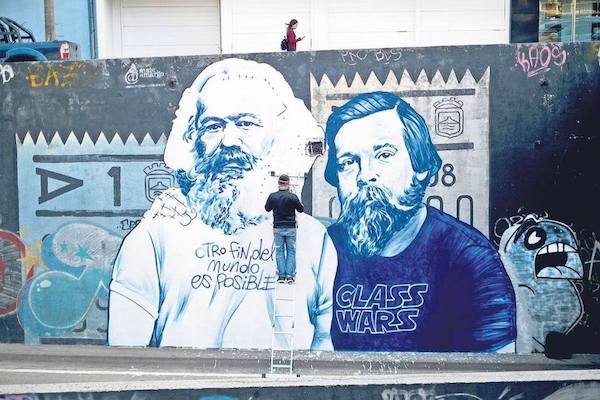 I’ve just signed a contract with Polity Press to write a new book, “Marxian Economics: An Introduction.” The idea is to publish it in late 2021 or early 2022. – David F. Ruccio (Photo: [ht: adm])

I’ve just signed a contract with Polity Press to write a new book, “Marxian Economics: An Introduction.” The idea is to publish it in late 2021 or early 2022.

My goal is to write a textbook that can fulfill two purposes: first, a stand-alone book for courses that are focused on Marxian economics or survey courses that have a section devoted to Marxian economics; second, it will also be useful as a companion text in a course that is based on reading all of or major selections from Karl Marx’s Capital. While the book will be aimed at college and university students (both undergraduate and graduate) in economics, it will also be relevant for and accessible to students and professors in other disciplines—such as sociology, geography, history, and cultural studies—as well as to interested individuals outside the academy.

Here then is the proposed outline of chapters:

Chapter 3, Toward a Critique of Political Economy

Chapter 8, Debates in and around Marxian Economics

Chapter 9, Transitions to and from Capitalism

The content of much of the manuscript is in my lecture notes, since I taught Marxian economic theory for almost four decades. But some of it is not, and will require exploring a few new areas and topics. My plan is to use this blog to compose the new sections, in 1000-1500-word posts—much as I have been doing for my other book, “Utopia and Critique” (see here). I welcome feedback to any and all of the book-related posts that will appear in the coming months.

And the necessary disclaimer: these are not sections of the final manuscript. Far from it! They are merely first drafts of some of the material that I will edit later on for the book.

As you open this textbook, you may be wondering, why should I study Marxian economics?

In the United States and in many other countries, Marxian theory, including Marxian economics, is a controversial topic. That’s certainly been true for the past few decades, when the topic was all but taboo. But beginning with the crash of 2007-08—the Great Recession or what some have called the Second Great Depression—the climate has dramatically changed. More and more people, especially young people, have become interested both in Marxian criticisms of mainstream economics and in possible alternatives to capitalism.

Here’s Nouriel Roubini, professor of economics at New York University’s Stern School of Business and the chairperson of Roubini Global Economics, an economic consultancy firm: “So Karl Marx, it seems, was partly right in arguing that globalization, financial intermediation run amok, and redistribution of income and wealth from labor to capital could lead capitalism to self-destruct.”

And then, from the other side of the Atlantic, there’s George Magnus, Senior Economic Adviser to the UBS Investment Bank: “Policy makers struggling to understand the barrage of financial panics, protests and other ills afflicting the world would do well to study the works of a long-dead economist: Karl Marx. The sooner they recognize we’re facing a once-in-a-lifetime crisis of capitalism, the better equipped they will be to manage a way out of it.

Many of us were surprised, including those of us who have spent decades studying and teaching Marxian economics. I did so at the University of Notre Dame for almost 4 decades.

Living and working in the United States, we’d just been through a 30-year period in which Marx and Marxian ideas had been marginalized, in the discipline of economics and in the wider society. Marx was declared either dangerous or irrelevant (or, often, both).

Capitalism was humming along (with, of course, the usual ups and downs) until. . .the Crash of 2008, when the world economy was brought to the brink of disaster. And Marx, almost in a blink of an eye, was relevant again.

To be honest, it wasn’t that Marxists could take all, or even much of, the credit (or blame). It was actually the spectacular failure of mainstream economics that led to this dramatic change.

Even more, they didn’t even consider a crash even a remote possibility. The chance of a crisis starting with the housing and banking sectors didn’t even exist in their theoretical framework.

And, once the crash happened, they didn’t really have much to offer. The policy that went along with their models suggested letting the banks sort out the problems on their own. Until, of course, the panic that set in with the failure of Lehman Brothers, which brought first the American economy and then the world economy to the brink of collapse.

The kinds of problems building up for decades simply didn’t figure prominently in mainstream economic theoretical models and empirical analyses. Problems such as:

The result of these and other changes in the U.S. economy created, for the first time in U.S. history, a growing gap between steadily growing productivity and stagnant real wages.

And, of course, an increasingly unequal distribution of income, reminiscent of the period just before the first Great Depression, when the share of income received by the richest 10 percent of Americans approached 50 percent of total income, and that of the bottom half of the population hovered in the low teens.

Mainstream economics—neoclassical and Keynesian economists, both microeconomists and macroeconomists—either ignored these issues or explained them away as a matter of efficient markets and good for growth.

The financial sector needed no oversight or regulation, because of the idea of efficient markets (which meant that all risk was calculated into prices, and all participants had all the relevant information)

And inequality was either good for growth or, if seen as a problem, just the inevitable result of technology and globalization, which could be handled by workers acquiring better skills and more education.

Then things changed, especially as the problems cited above never really disappeared, even as stock markets entered another boom period. Marxian criticisms of both capitalism and mainstream economic theory became appropriate topics of discussion and debate again.

While references to Marxian economics have increased in recent years, there’s no indication commentators have actually read the works of Karl Marx. Perhaps they remember reading the Communist Manifesto at some point in their education but not Marx’s magnum opus Capital. And they certainly haven’t read the scholarly work on Marx.

Perhaps they were afraid to or didn’t know how to, or were just too lazy. But the fact remains the time is ripe for a new reading of Marx’s Capital.

If they did such a reading, what would they find?

They would encounter something quite different from what they—and perhaps you, reading this book—expect. For example, you won’t discover a blueprint for socialism or communism. Nor will you find a set of predictions about how the crises of capitalism would lead to socialism or communism. Or much else that is regularly attributed to Marx and Marxian economics.

Marxian economics is organized around five key ideas: critique, history, society, theories, and class. These are ideas you’ll encounter many times over the course of this book.

Critique: Capital (and the many other economic texts Marx wrote) are less a fully worked-out theory of capitalism than a critique of the ideas—the concepts and models—that are central to mainstream economics. In other words, Marx carefully studied the works of the famous classical economists, such as Adam Smith and David Ricardo. He used them as his starting-point but then ended up in a very different place, challenging much of what is taken as the “common sense” within economics. You may find yourself questioning some of the key ideas within contemporary mainstream economics during the course of reading this book.

History: Much of mainstream economics is based on models that never really change. Marxian economics is different; it is focused on history—both the history of economic systems and the history of economics ideas—that change over time. Thus, for example, within Marxian economics, capitalism has a history: it didn’t always exist; once it came into existence, it has continued to change; and, at least in principle, capitalism can come to an end, replaced by a fundamentally different way of organizing economic and social life.

Society: Marx’s approach was always about an economy within society, both affecting and being affected by everything else—social rules, political power, cultural norms, and much else. Therefore, different societies (and, for that matter, different parts of society) have different ways of managing economic life, now as in the past. So, they have radically different ways of allocating labor, organizing production, exchanging goods and services, and so on.

Theories: Not only are there different economies and societies; there are also different economic theories. Marxian economics is one, mainstream economics is another. (And there are many others you may have read or heard about: radical, Post Keynesian, feminist, postcolonial, green, and the list goes on.) And economic theories are different from economic systems. So, for example, Marxian and mainstream economists have different theories—they tell different stories, they arrive at different conclusions—about the same economic system. So, as you will see over the course of this book, the Marxian theory of capitalism is very different from the mainstream theory of capitalism.

Class: One of the particular interests of Marx and Marxian economists is class, the particular way workers (for example, wage-laborers under capitalism or serfs within feudalism) perform more labor than they receive to sustain their lives. The rest, the extra or surplus labor, is appropriated and controlled by another, much smaller group (for example, the class or capitalists or feudal lords). Marx created a special name for this: class exploitation.

So, according to Marxian economics, different societies have different class structures, which have changed historically. And Marx was critical of both the mainstream economic theories that deny the existence of exploitation as well as the economic systems in which the class of workers who perform the surplus labor are excluded from making decisions about the surplus.

You can therefore see how there would be, from the very beginning, an animated debate between the advocates of mainstream and Marxian economic theories.