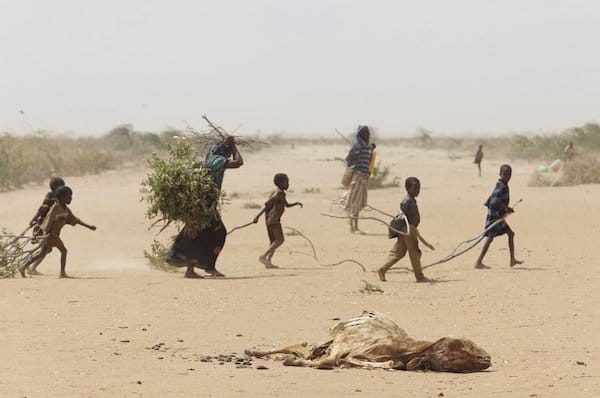 Climate campaigner Greta Thunberg urged world leaders on September 10 to consider the fate of the world’s poorest people before decisions are made about climate policy.

Tweeting about a new report from the Institute for Economics and Peace, released the same day, she simply said:

The pain and suffering represented by the figure that the Ecological Threat Register (ETR) has produced is hard to imagine.

The ETR measures the ecological threats countries are currently facing and provides projections to 2050. Its inaugural report states that 19 countries with the highest number of ecological threats are among the world’s 40 “least peaceful countries”. They include Afghanistan, Syria, Iraq, Chad, India and Pakistan.

The descriptor “least peaceful” hides the terrible truth about how they got this way. Afghanistan and Iraq, which once enjoyed higher standards of living, have been plunged into war because of imperialist invasions and the never-ending occupations that followed.

These “least peaceful countries”, it should be noted, contribute little to global greenhouse gas pollution, as a World Bank graph for Afghanistan shows.

The report was produced to show which countries are least likely to cope with extreme ecological shocks. Thunberg has highlighted it just before European Union leaders meet to decide on a new climate law.

They are wrangling over an emissions target for 2030, with some pushing for the EU to cut its greenhouse gas emissions by 60% below 1990 levels by 2030. The EU’s current target is 40%.

The European Parliament will vote on the new law, including the target, next month.

Thunberg tweeted on September 10 that she and other climate activists had an online meeting with the chair of the environment committee of the EU Parliament. “We’ll tell him to vote in line with the Paris Agreement and the current best available science,” she said, receiving 4000 likes.

Like so many others, she knows full well that we are not all in the climate emergency together–not by a long shot, as the ETR makes clear. More than 1 billion people live in 31 countries where the country is “unlikely to sufficiently withstand the impact of ecological events by 2050”, it said.

This will lead to mass population displacement–climate refugees.

Sub-Saharan Africa, South Asia, the Middle East and North Africa face the largest number of ecological threats. Many are also in a state of permanent or semi-permanent war.

By 2040, 5.4 billion people–more than half of the world’s projected population–will live in the 59 countries experiencing high or extreme water stress, including India and China.

Those countries already identified as being most at risk of not being able to cope in catastrophic climate conditions are already finding it difficult to meet people’s basic needs. Climate change will lead to more conflict–over food security and basic resources. It will lead to mass displacement, putting greater strain on neighbouring poor countries.

These are more compelling reasons for why rich countries–those with the highest greenhouse gas emissions–need to act on the climate emergency. The effects of catastrophic global warming will be felt everywhere, but their deadliest impact will be on those countries that have contributed the least to this existential problem.