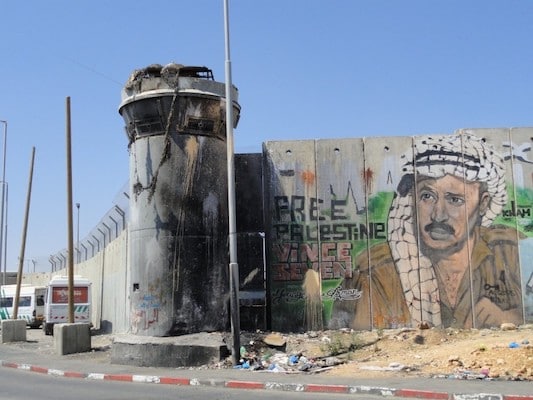 Qalandia Checkpoint, the biggest crossing in Jerusalem municipality from one side of the separation wall to the other. Photo courtesy of the Socialistische Partij, Netherlands/Flickr.

The campaign to hold Canada’s national broadcaster accountable for its skewed and biased language guide concerning the use of the word “Palestine” is picking up steam.

In recent weeks, multiple organizations have spoken out against the CBC’s decision to issue an on-air apology after Duncan McCue referenced Palestine during an interview with cartoonist, journalist and war correspondent Joe Sacco on “the themes of colonialism and resource extraction.” Since then, more than 2,000 people have participated in a letter writing campaign, expressing their disagreement with the broadcaster’s deference to media-policing groups like Honest Reporting Canada (HRC), a pro-Israel lobby organization that pushed the CBC to admit to wrongdoing.

The response from CBC management, however—including from the Executive Producer of The Current, the show McCue was guest hosting at the time, and the Director of Journalistic Standards, Paul Hambleton—has not been convincing. On the contrary, it has put the CBC in a more precarious position as the full extent of its restrictions on the usage of the word Palestine has been revealed.

In a long response to the thousands of people who wrote to the CBC over the last several weeks, Hambleton insisted that Palestine is not within the CBC language standards, explaining that the CBC is “meticulous in ensuring balance and fairness whenever a story emerges.”

The Canada Palestine Association (CPA) was one organization that participated in the letter writing campaign. It received a reply from the broadcaster after requesting a formal review from the CBC Ombudsman. Sent on September 10, the letter condemns the CBC’s biased language policies while providing some useful historical context:

Frankly, the more CBC explains this biased policy the more convoluted their verbal gymnastics seem to become. They have now shed more light on the relevant clause that started the whole fiasco and led to The Current apologizing on air for referring to Palestine, rather than the Palestinian territories. The full clause has fastidious detailing of when not to use the word Palestine; one cannot refer even to pro-Palestine supporters, they can only be pro-Palestinian. And when referring to historic Palestine, one must use the term “British Palestine” if talking about the period of British colonial rule after WW1.

Even if one puts aside CBC’s argument on Palestine not yet being a “sovereign country,” why this obsession with removing any usage of the word Palestine in nearly all other contexts, including generic or historic ones? The “British Palestine” reference seems particularly ridiculous and archaic in post-colonial times.

Here are some documented historic facts:

a. In 1896, the founder of Zionism, Theodor Herzl wrote in his book The Jewish State: “In Palestine (our emphasis) … we shall be for Europe a part of the wall against Asia, we shall serve as a vanguard of civilization against barbarism.”

b. In 1897, the First Zionist Congress listed as some of the aims of the movement: “Zionism strives to create for the Jewish people a homeland in Palestine (our emphasis) secured by public law. The congress contemplates the following means to the attainment of this end:

c. The British Balfour Declaration that adopted and legitimized Zionism stated: “His Majesty’s government view with favour the establishment in Palestine (our emphasis) of a national home for the Jewish people…”

As demonstrated, Palestine existed and was referenced as such before and during the colonial British Mandate on Palestine, the official name of which explicitly recognized Palestine. For the CBC to claim that it should now be referred to only as “British Palestine” is not just dishonest, misleading and a fabrication of history, it also adopts the narrative of the Zionist movement that denies the existence of Palestine and its people.

The CBC is well aware of the ramifications of its language choices. The broadcaster must therefore also realize it is blatantly promoting the false premise that Palestine does not (nor ever did) constitute any kind of national entity. This is not just a matter of semantics. It has serious consequences—weakening and denying the Palestinian claim to nationhood or statehood directly enables and whitewashes the ongoing ethnic cleansing perpetrated by successive Israeli governments.

This has long been one of the key foundations of far-right Zionism: convincing the international community that the ‘Palestine issue’ is simply a humanitarian one, leaving no room for self-determination nor a solution involving national rights.

We have seen a worrying trend of the erasure of Palestine in many official capacities in recent years—on social media and Google Maps, by governments like Canada’s that refuse to list Palestine as a country of birth on the passports of Palestinian-Canadians, and by media organizations that will go to great lengths to avoid any mention of Palestine, even if it means going back a hundred years to rewrite history. 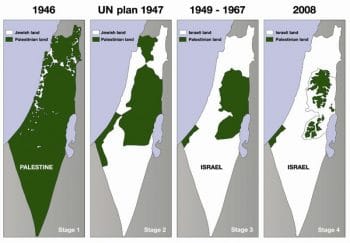 Map showing the diminishing lands of Palestine, from roughly the inception of the State of Israel until 2008. Image courtesy of the Palestine Solidarity Campaign/Flickr.

The CPA letter also drew comparisons with the CBC’s handling of language around Kosovo, questioning the broadcaster’s impartiality and objectivity. It concluded by implicating the organization in Palestinian dispossession:

Although each situation is unique, surely there are universal principles that should guide the CBC’s policies. Kosovo is not a member of the United Nations in any capacity, it is recognized by fewer countries in the world than the state of Palestine, yet the CBC is happy to use the proper term Kosovo in its reporting. The only difference we can see is that the Canadian government has officially recognized Kosovo, but not Palestine.

Although the CBC’s mandate states it has administrative and programming independence from the Canadian government, this doesn’t seem to be the case. Their website states: “This principle of ‘arm’s length’ relationship between the CBC and government is critical to the Corporation’s independence.” This “arm’s length relationship” doesn’t seem to have held up well. Shouldn’t we just acknowledge that our national broadcaster implements the foreign policy of successive Canadian governments in its reporting? A foreign policy that resulted in Canada twice losing out on a seat at the UN Security Council, a foreign policy that desperately is in need of a review, a foreign policy that has isolated Canada internationally…

Finally, we strongly believe that the CBC is promoting a politically reactionary Zionist narrative, and the official Canadian position in support of that narrative; in doing so, this makes the CBC complicit in the dispossession and genocide of a whole nation and its people.

Palestinian Canadians and their supporters are determined to hold the CBC to account for its insistence on minimizing Palestine’s national identity. We will not rest until the broadcaster renounces these colonialist policies.

The late Palestinian poet Tawfiq Zayyad (the CBC would insist on calling him Arab-Israeli) eloquently described the resilience of his people in one of his poems: “Here we shall remain, a wall upon your chest.” That is the strength of the Palestinian people—they are 13 million strong and will never relinquish their national rights.

Marion Kawas has written extensively on the Palestinian struggle, and is a regular contributor to Palestine Chronicle and other websites. She is also active in Palestine solidarity campaigns and is a member of Canada Palestine Association and BDS Vancouver-Coast Salish Territories.