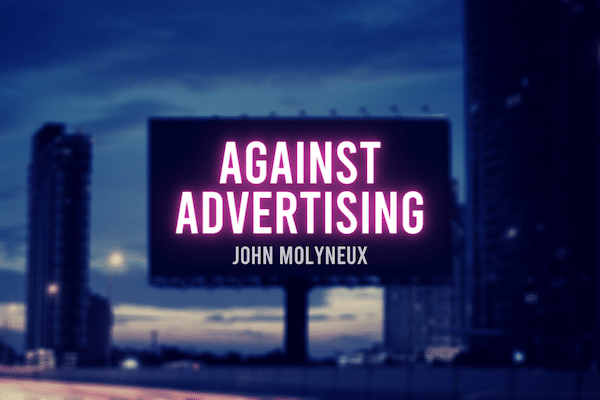 When the revolution comes you will know it … because there won’t be no commercials.

In contemporary capitalist society advertising is all pervasive. It is so widespread that mostly we don’t notice it, or at least think we don’t notice it. It just becomes part of the taken-for-granted wallpaper of our lives.

But it really is everywhere. In every newspaper and every magazine, interrupting every TV and radio programme, through your letterbox, on every bus and train, in every cinema, on innumerable street billboards and in countless shop windows and, of course, on your phone. It is the very basis of Google, Facebook and the rest of social media.

This is a relatively new phenomenon. Of course it is possible to trace individual examples of advertising back to the ancient world, to the very birth of commodity production, and this will be done in the attempt to ‘naturalise’ and eternalise advertising thus rendering it unquestionable.

But in reality, mass advertising of the kind we face today–saturation advertising–developed in the twentieth century alongside mass production. J Walter Thompson, founded in 1899, was the first properly international advertising agency and, fittingly, the industry came of age promoting the sales of cigarettes in the 1920s.

And advertising works. Many, perhaps most, of us might like to think we are not much influenced by advertising, but if it wasn’t effective there would be no way the major capitalist corporations would spend so much on it. In 2015, global spending on advertising stood at $529.43 billion and through most of the twentieth century advertising accounted for an average of about 2.2% of U.S. GDP.

The problem is that because advertising is so pervasive and so familiar in our daily lives, what it actually is gets ignored and goes unmentioned. This is what I want to highlight here.

The first thing to say is that advertising is blatant, unalloyed capitalist propaganda. If we lived in a country where every time the news came on it was prefaced by a statement about what a great job the government was doing and how splendid the president/prime minister was (as is virtually the case in a number of dictatorships) it would at least evoke some critical comment from journalist types living in so-called democracies.

The central premise of most advertising is the deeply capitalist idea that your identity and worth as a person is primarily determined, not by who you are and what you do, but by what you own and by the commodities you buy.

Wearing such and such jeans or perfume, drinking this brand of gin, smoking this cigarette, eating that kind of chocolate, driving that type of car; these will make you cool, successful, the centre of attention. Above all, it will make you sexually attractive. In other ways, advertising systematically promotes what Marx called ‘the fetishism of commodities’–the attribution of semi-magical powers to inanimate objects.

One feature of this promotion of commodity fetishism is the way quite downmarket products (i.e. cheap and mass-produced ones) are linked to very glamorous images and lifestyles completely out of the range of the targeted consumers but assumed to represent those consumers’ fantasy aspirations.

Take for example the Milk Tray adverts which showed a James Bond-style break in at an exotic location ‘all because the Lady loves Milk Tray’; or the Ferrero Rocher chocolates being served on fancy trays at an embassy party.

Another feature is the blatant appeal to ‘keeping up with the Jones’s’ consumer envy; adverts showing men jealous of their neighbour’s new car or a guy sitting on a park bench jealous of someone else’s superior broadband(!)

Then there is the widespread practice of sporting and showbusiness star endorsement in which celebrity fetishism and commodity fetishism merge. Seeing acclaimed and distinguished actors such as Helen Mirren and Robert Niro, who cannot possibly need the money, appear in commercials just reinforces how in thrall we have become to the culture of publicity.

Advertising, however, is saturated with cynically calculated lying. Just think of ‘Guinness is good for you’, (no it’s not); ‘Carlsberg … probably the best lager in the world’ (no it’s not); ‘The best Coffee in Dublin’ (hardly); ‘home-made cakes’ (clearly not). Again this is so widespread, so familiar that it usually passes without comment. But it means that our daily lives are filled with mendacity.

There are, of course, different kinds of lies. There are ‘white’ lies which are ‘untruths’ but which are designed to spare people’s feelings or avoid giving offense. There are ‘lies’ which may be objectively false but which the author or speaker may well believe to be true; for example that Covid -19 is a conspiracy.

But the lies in advertising are neither of these. As such they are frequently not ‘legally’ or ‘technically’ falsehoods but they are consciously designed to mislead. Take, for example, the famous old washing-powder ad, ‘Persil washes Whiter’.

Of course, it wasn’t a literal lie because it didn’t say what it washed whiter than. But in reality, it was a lie because it wasn’t in any way true that Persil washed ‘whiter’ than other washing powders anymore than ‘Tide washes cleanest’ was true, or ‘Blue Daz boils whitest of all’ (all real advertising claims).

The key thing is that advertising normalises lying to such an extent that even pointing this out seems like an embarrassing and superfluous statement of the obvious. And it should never be forgotten that the advertising industry as a whole, by virtue of its continued promotion of cigarettes and tobacco long after their deadly effects were well known, was actually complicit in mass murder. Now, through its collaboration in sickeningly cynical greenwashing, it is complicit in planetary devastation.

It is no accident that many of the examples I have chosen to provide simple illustrations of my points are from the past. A lot of recent and contemporary advertising is more ‘subtle’, more ‘nuanced’, more ‘ironic’ (‘probably’) reflecting the increased sophistication and media-savvy nature of its audience. But this in no way alters its primary purpose to induce us to purchase particular versions of essentially similar products, or the duplicity built into this process. 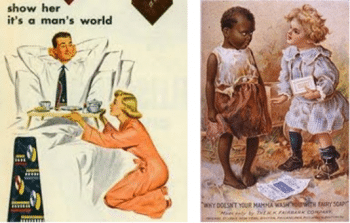 In this context, it’s worth looking at the relationship of advertising to such social issues as sexism and racism. In the past adverts were crudely and overtly sexist and racist.

But even when that kind of nauseating image above receded, massive stereotyping remained.

In the case of women, all adverts to do with childcare and housework were targeted at women, frequently with the guilt tripping message that use of this particular product would make someone a ‘good wife and mother’.

Once the racist ‘golliwog/little sambo’ images were finally deemed offensive, the overwhelming characteristic of advertising was the absence of people of colour. As late as the mid-1990s, there was a scandal about a Ford Motors advert airbrushing out black faces from a publicity shot of their workforce.

But if this has changed in recent years with far more ads featuring ‘strong’ women (or women CEOs) and more multicultural representation, we should be under no illusion that this constitutes some kind of change of heart. All the heavy lifting for the shift in public attitudes this reflects was done from below on the streets, in workplaces and communities.

It’s like the corporate sponsorship of Pride. When corporations thought sexism, racism and homophobia were profitable, they were sexist, racist and homophobic. Now they think there might be more money in a dash of feminism, multiculturalism and pink washing. Indeed, it is clearly an advertising strategy to seize on the values, slogans and iconography of the left, rob them of their content, and turn them into market opportunities; Che Guevara and Revolution being two prime examples.

Finally, it is worth saying something about the relationship of advertising to art.

Historically, art has taken four main forms: visual art, music, literature and performance, all going back at least to the ancient world or before and each with its subdivisions ( visual -drawing/ etching/painting/ sculpture/ photograph ; music–singing/playing/composition; literature–poetry/prose/ drama; performance–acting/dance) and with various more modern hybrid forms such as opera (music and drama), ballet (music and dance) and cinema (visual art/acting/music).

Advertising uses and even synthesises all these various forms just as it makes use of virtually every medium. If advertising is art it is arguably the great art of her time. (I have seen the feminist critic, Germaine Greer, argue precisely this). In my view advertising is not art.

Rather, like the relationship of Stalin’s Russia to socialism, it is its utter perversion, its transformation into its dialectical opposite. Art is a product and expression of creative labour and a means of understanding our world. Advertising is a product of the appropriation and twisting of human creativity into a means of misrepresenting, obscuring and fetishising the world.

So just as plastic, toxic gases and CO2 emissions pollute our physical environment, advertising pollutes our cultural environment. What, therefore, is to be done about it?

Obviously certain specific adverts can be campaigned against and successfully removed, and the location of certain kinds of advertising can and should be restricted. Unfortunately, however, the banning of advertising–under capitalism–is a utopian project. Capitalism is a system of generalised commodity production; it turns human labour and everything else it can get its hands on into sellable objects and sources of profit. To free ourselves of the scourge and poison of endless advertising we will have first to free ourselves from the chains of capitalism.