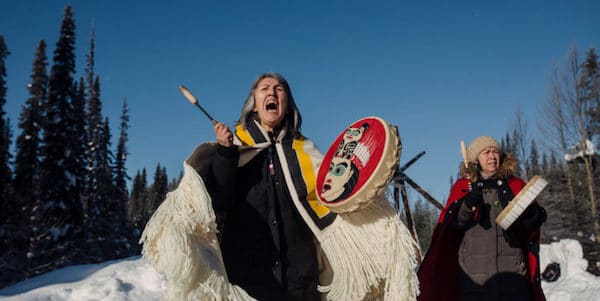 A global movement has emerged to stand in solidarity with the struggle of indigenous peoples fighting to protect Wet’suwet’en territory from the construction of a 670-kilometre hydrofracturing (‘fracking’) gas pipeline. If constructed, it will devastate traditional lands and waterways, and cultural ways of life. Wet’suwet’en territory lies in what is known as British Columbia, Canada. But the Wet’suwet’en people–who have lived there since time immemorial–never ceded or surrendered their territory to the crown. They govern the community and stewardship of the land by Wet’suwet’en law and are currently reoccupying traditional lands.

Reoccupation isn’t a new concept. Wet’suwet’en people have always occupied and utilised the lands, despite the government continuing to grant leases and licences to industrial projects, including logging, oil and gas, and pipelines. Across Canada, many communities are revitalising governance and stewardship of lands to assert sovereignty, regenerate traditional cultural practices and offer healing to the community.

In 1997, the Canadian supreme court confirmed that indigenous claims to land in this area still exist, and ‘free, prior and informed consent’, as stipulated by the UN Declaration on the Rights of Indigenous Peoples, is necessary for any construction to proceed.

A healing centre was built on Unist’ot’en land in January 2015 to enable the community to engage in traditional practices to preserve the connection to the land and revitalise cultural identity. There have been a series of action camps on the land to share traditional and cultural knowledge between indigenous communities and the next generation.

‘Our people’s belief is that we are part of the land. The land is not separate from us. The land sustains us. And if we don’t take care of her, she won’t be able to sustain us, and we as a generation of people will die,’ says Unist’ot’en hereditary spokesperson Freda Huson.

Despite reoccupation of territory and the supreme court ruling, construction has been allowed to move forward, with investments accepted. Violent police interventions have awakened the global community to the ongoing colonial violence perpetrated by the Canadian government and the oil and gas economy.

Extractivist projects bring immediate damage to waterways and traditional lands, along with safety concerns due to the infrastructure and personnel needed to power projects. Since the time of invasion, settler-colonial forces have been responsible for violence to indigenous women and two-spirited people. This is now exacerbated by oil and gas projects, which necessitate an influx of temporary workers, camps and security forces. The 2019 National Inquiry into Missing and Murdered Indigenous Women and Girls found that the root cause of the alarming rates of violence was persistent and deliberate indigenous and human rights abuses and violations.

Despite the government’s recent posturing that it is committed to a truth and reconciliation process, the actual terms of what that means for indigenous communities fail to hold any weight. The government continues its history of colonial violence as it progresses with illegal projects that fail to respect the right to self-determination, traditional governance, access and use of traditional territories.

In November 2018, TransCanada applied for a court injunction to gain access to traditional Unist’ot’en territory to begin construction on the Coastal Gaslink Pipeline (CGL) that would transport fracked gas to the Pacific coast. The CGL pipeline is part of LNG Canada, a fracked gas processing facility run by five companies, of which Royal Dutch Shell is a 40 per cent owner. Investors in the pipeline include HSBC, Credit Suisse, Barclays, Deutsche Bank and JP Morgan.

Investments in the projects continue despite unanimous opposition from hereditary chiefs from all five clans in the region, which Canada has failed to recognise. In January 2019, the Royal Canadian Mounted Police (RCMP) engaged in a tactical assault on the Wet’suwet’en people on Gidimt’en checkpoint. Images of armed police encroaching on the peaceful healing centre quickly caught the attention of national and international press. The access injunction was burned on a traditional funeral pyre with a homemade flag on top that read ‘Reconciliation is dead’. As the camp–led by matriarchs–was invaded by the RCPM and tactical teams, red dresses were laid out to draw attention to the epidemic of missing and murdered indigenous women.

Across Canada we have witnessed the rise of Youth for Wet’suwet’en in solidarity, calling for the rights of indigenous peoples to be upheld and a halt to the construction of the pipeline. Their movement has staged occupations of banks and government and corporate offices, and has ignited a movement of activists globally drawing attention to the ongoing colonial violence. In Alberta, a recent victory by indigenous communities and allies halted the expansion of one of the largest proposed tar sands projects to date, the Teck mine.

The legal fight to stop illegal projects threatening the future of local communities and the global climate is being led by indigenous peoples in Canada and internationally. However, with some authorities rolling back environmental protections, action is being thwarted by the COVID-19 pandemic. For example, in response to the crisis, provincial governments in Alberta and Ontario have relaxed environmental legislation. This has caused further alarm regarding the government’s ability to protect citizens from the immediate devastation caused by extraction projects and raised new doubts about the long-term vision to protect our air, water and climate.

Despite global scientific consensus that extraction of fossil fuels must be halted to stop climate chaos, projects continue to be approved at immediate peril to local communities. With the delay of COP26 until 2021, and rollbacks of environmental legislation across the planet in response to COVID-19, it is essential the global community pays attention to frontline resistance to extraction if we are to halt runaway climate change.

It is crucial that while practising social distancing we find ways to keep the eyes of the world on what is happening in Wet’suwet’en territory with online activism and continuous application of pressure on the banks and corporations that have invested in the project. The Coastal GasLink (TransCanada/ TC Energy) construction is ongoing in indigenous territories despite British Columbia declaring a state of emergency, bringing with it transient workers whose lack of social distancing endangers communities.

In the midst of the pandemic we are facing a historic plunge in global oil prices, causing unknown volatility in which the ramifications for the pipeline remain to be seen. We are all being forced to rethink how our economy works alongside the best interests of our environment, public health and a healthy climate. It is essential that indigenous models of economy, in relation to responsibility to our relatives–human and nonhuman–are at the centre of that vision. We will need to revitalise local economies and dig deep to rediscover our traditional and ancestral knowledge alongside coordinated global research. We can no longer continue with a capitalist paradigm that sees communities as collateral damage in order to prop up a dysfunctional economy at the cost of life itself.

This article was first published in our Summer 2020 issue