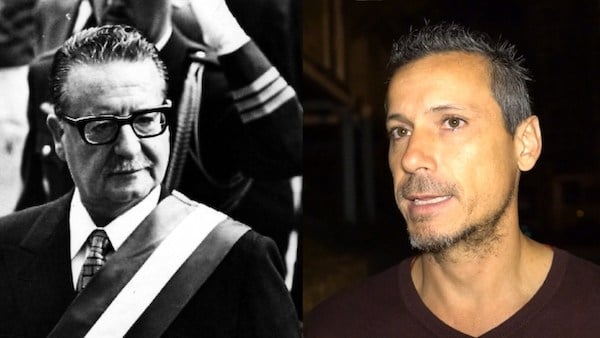 Sepúlveda Allende spoke about the many similarities between the democratic revolutions in Chile and Venezuela, and why he thinks Hugo Chávez and Nicolás Maduro follow in the footsteps of his grandfather.

BEN NORTON: September 11 is a dark date not only in the United States, but also in the South American nation of Chile.

At a political rally in Caracas in 2019, I met Salvador Allende’s grandson, who spoke about the legacy of his martyred grandfather, and why he sees historical echoes in Venezuela today.

One of the activists here today is Pablo Sepúlveda Allende. He is an activist and revolutionary, and a doctor, here in Venezuela, who has lived here, lived in this country for 10 years. He is also the grandson of the late Chilean socialist leader Salvador Allende. Thanks for joining us, Pablo.

And this moment actually is very important politically, because the echoes of the 1973 CIA-orchestrated coup in Chile weigh very much on the minds of Venezuelans right now. So can you talk about the important historical ramifications and what that means for Venezuela and other socialist governments around the world today?

PABLO SEPÚLVEDA ALLENDE: Yes, there are many similarities, parallels, in both processes. First, that the government of Salvador Allende was the first socialist government, that called itself socialist, that wanted to have a revolution peacefully, and democratically. All of the other revolutions have always been armed.

The strategy of the United States to overthrow and kill Salvador Allende also has similarities, the forms of attack, to what has happened here in Venezuela: an economic war, an economic blockade, creating an economic and social crisis, which was the excuse, or justification, which the Chilean troops used to carry out the coup d’état. Everything with the U.S., with the CIA behind it.

And Nixon said, Richard Nixon, the U.S. president, said: We must “make the economy scream” in Chile. There was a plan to destroy the economy, to create a crisis, so that that could be the excuse for a coup d’état.

Here, Venezuela also, Hugo Chávez also set out to do a democratic revolution; he took those same ideas, of Salvador Allende, to carry out a revolution by the democratic and peaceful path.

The difference is in the military of Chile and of Venezuela. The officers of the Chilean military, the top-level military officials, are from the upper class. In Venezuela, the composition of the social classes of the military is different.

Because of this, for example, Hugo Chávez, coming from a humble background, the son of teachers, humble, was able to become a lieutenant colonel. So in the composition of the classes of the Venezuelan military, there is more consciousness of the working class, in addition to the history of Simón Bolívar, of the liberation of countries (from Spanish colonialism).

So this helped cause the coup to fail. There was a part of the armed forces that was not in agreement, and they restored Hugo Chávez. And after the people filled the streets to demand that he return, and the armed forces, above all young soldiers, pressured for him to return, the coup was reversed–something unprecedented in history.

And after, the economic attacks are very similar. The economic warfare, the financial and commercial blockade, especially in the past few years, is also very similar to what happened in Chile: the big business owners hoarding food, medicine, basic goods; they hide them; they don’t put them in the market; they put them in a parallel market.

And the overcharging, hiking up prices, smuggling, all of that is a very similar economic war. Which here in Venezuela, the economic crisis is justification for military intervention.

And another historic lesson that Chávez learned, which he always said, remembering Allende, he said: We are a peaceful revolution, like that of Allende, but we are not unarmed. That is to say, we are able to resist.

Allende did not totally have the army; they betrayed their homeland, their duty, and carried out the coup d’état.

So there are many similarities.

Now in Venezuela it has been much more complex, much more sophisticated, the intervention, the destabilization. Now we see how it also has factors similar to those of Libya, of un-recognizing a government, un-recognizing the current government, of Nicolás Maduro, which was democratically elected, with more than 6 million votes, in which, yes, the opposition participated; where, yes, there were international organizations that monitored the elections.

But the United States and the other countries, say it was not a legitimate election; so they un-recognized the current government, and they recognize a parallel government.

So yes, with that of Allende, there are many similarities, in terms of the coups, the economic war, and also the response of the government has also been similar.

In the time of Allende, grassroots organizations got together, the base, the people organized, to distribute the products that were being hoarded.

They themselves went to the warehouses, where the food was being hoarded, and they recovered and redistributed it.

Here the (Venezuelan) Bolivarian government gives the CLAP (food boxes) to the organized people, the Local Committees for Supply and Production (CLAP), and it gives them the food monthly, and they share it among the people. Because they have a census, a list of how many families, what needs they have; they give more food to the larger families, to those who have chronic illnesses.

So there is organization of people power, with the help of the government, to alleviate this situation.

This is given to monthly to 6 million families, that is to say, if each family has 3 or 4 people, that is roughly 80 percent of the Venezuelan population.

And part of the U.S. blockade is to impede this. There are numerous examples of how they have prevented this food from arriving to Venezuela, with the goal of making the situation worse.

Recently they did not allow Iberia, an airline, to bring food to Venezuela. The United States sanctions companies that sell food to Venezuela, or even medicine. That is all part of this blockade, to create the crisis.

The sanctions, the blockade, it is theft. The U.S. government is robbing Venezuelan assets, stealing Venezuela’s international assets, billions and billions of dollars.

Just the Bank of England confiscated, in gold, from Venezuela’s international reserves, equivalent to $1.2 billion worth of gold. And the United States, the branch of (state oil company) PDVSA in the U.S., Citgo has $11 billion of assets in the U.S.

But here there is a people who are organized and conscious; they have gone out and shown many times that, in spite of the difficulties, they clearly know who is causing the crisis, the majority at least.

Because of that, in each election, the recent elections in the last few years, the government has won them by a lot. Because the people have shown a lot of consciousness.

And because the Venezuelan military has not been corrupted, and has not betrayed its people. They have stayed loyal to the constitution and to the popular elections, to what the people chose.

BEN NORTON: And in fact in the foreign affairs ministry here in Venezuela, there is a room dedicated to Salvador Allende.

Many Chilean exiles came here too, to Venezuela in the 1970s. So the figure of Salvador Allende is very present here.

Yes, there are many similarities. They are unique figures; they are different groups, but the essence of the struggle is the same. Both of them, Maduro as well as Chávez, like Allende, they struggle for a just society, against capitalism, against neoliberalism.

It is the same struggle. And the enemies are the same: large capital, the global oligarchy or plutocracy, represented by imperialism.

For someone who claims to be on the left, in Chile or the world, who says they believe in socialism, or says they are part of the left, it is shameful and contradictory for them to claim Venezuela is a dictatorship.

I think that is part of the strategy to divide the left, to separate the left from Venezuela. And that has to be confronted.

And I, because of that–thanks for the space to this say this–Allende would be a great friend of Chávez, when Hugo Chávez was in power, and Maduro also. And he would be here fighting with all of his might so that this process, so that the crisis is overcome, so that the Bolivarian Revolution goes forward, and so we can defeat U.S. and global imperialism.

PABLO SEPÚLVEDA ALLENDE: Well for me personally, it impacted me a lot. I was born in Mexico. My parents were exiled, due to the coup. And they got refuge in Mexico.

And I began to study more, everything that happened. And how did it affect me? Well I think that is partly why I’m a doctor. It’s a profession that tries to alleviate people’s suffering.

And in politics, his entire political work, his political career, was to help those who needed it, understanding that it is an economic and political system that oppresses and exploits the majority of the population, to benefit a few people.

And he understood it to be that, along with many other revolutionaries in the world. So that inspired me first to become a doctor, and to work to try to follow his example.

And I think it is also for that that I am in Venezuela, another form, here I think I am living through what was the Unidad Popular (Allende’s coalition) in Chile, in a certain form. It is a process that it is very similar in many ways.

Ever since I learned about the Bolivarian Revolution, I wanted to come and get to know it. And well, I arrived 10 years ago, also to live firsthand a bit of what was lived in Chile in that time.

And to support, to struggle in what I can so that we win, so that what happened in Chile doesn’t happen here, so that that tragedy is not repeated here.

And now is a very critical moment, and the goal is that, a bloodbath, a coup, an invasion, that ends in tragedy. And we will struggle here to make sure that doesn’t happen.

And how has he (Allende) influenced Venezuela? Venezuela is the country, I believe, that more than any other country in the world that wants to vindicate the figure of Salvador Allende, and the process of his Popular Unity coalition.

And I feel a lot of honor here, to see how, when people find out that my grandfather was Salvador Allende, the kindness of the people is enormous. Because they know they are living through something similar to what happened there.

And they understand that they have to struggle so what happened there doesn’t happen here, so this doesn’t end in them defeating the revolution and installing a fascist government, and killing people.

And we must be, we are prepared for that, to confront that in every way, whether it be in good ways, or whether we have to sacrifice our lives resisting.