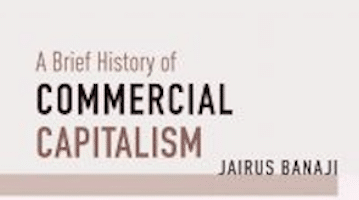 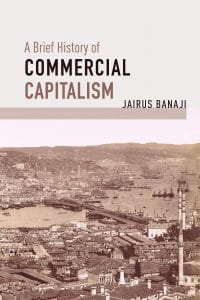 For Jairus Banaji, theory and history are tightly interwoven: without history, theory ends up ‘bad abstraction’; without theory, the intelligibility of history is doomed to fail. As Kant might have said, theory without history is empty, history without theory blind. Banaji’s collection of essays in Theory as History (2011) won the Isaac and Tamara Deutscher Memorial Prize for precisely establishing such a dialectical relation between theory and history. The same can be said now of A Brief History of Commercial Capitalism, where Banaji demonstrates the enormous gap that exists between the established concept of merchant/commercial capital as the ‘agent of circulation’ and its actual history.

Commercial Capitalism successfully ‘deconstructs’ the longstanding ‘orthodoxy’ (3) of mainstream Marxism regarding merchant capital which reduces the latter to ‘an agent of industrial capital’ (9) that makes profit simply by ‘buying cheap and selling dear’. In contrast, the merchant capital that appears in the book plays a crucial role in the formation and development of capitalism and remains ‘largely dominant down to the later decades of the [nineteenth] century’ (28). For almost ‘four or five centuries’ (7), merchant capitalists exercised their power not only over the networks of trade and trade infrastructures, but also processes of production in the colonies and the metropolises alike. The common-sense understanding of merchant capital which ‘maintains an unbreachable separation between commercial capital and the production of capital’ (8-9) partially stems from ‘a failure to grasp Marx’s method in Capital’ (3) where merchant capital, for methodological reasons, is characterized as ‘synonymous with the non-subjection of production to capital’ for which ‘its sole function is to mediate the exchange of commodities’ (9). Such statements of Marx, Banaji maintains, are not to be taken at face value but rather to be interpreted in accordance with Marx’s methodology which presupposes the primacy of industrial capital, thus subordinating merchant capital to industrial capital–the phenomenon that actually came into being, according to Banaji, only in the late nineteenth century with the ‘real subsumption’ of labour under capital. In short, Marx’s theoretical model of merchant capital does not work historically for the infancy of capitalism when there was clearly no industrialization.

Banaji offers a schematic and ‘specifically Marxist’ history of merchant capital and its global circuits of accumulation by drawing on the existing historiographies on the subject matter as well as through a variety of ‘first-hand’ historical records such as travel writings, ledgers, chronicles, letters and memoirs. The term ‘commercial capitalism’, as employed by Banaji, straddles a very long historical period with two major ‘phases’: first, the supremacy of Venice/Genoa in the twelfth to fifteenth centuries and the Portuguese intrusion into the Indian Ocean in the sixteenth century; second, the ‘corporate capitalism’ of the Dutch and English East India companies during the early seventeenth to mid-eighteenth centuries which ends with a ‘radically new economic conjuncture’ (64) in the ‘long nineteenth century (1784-1914)’ (Ibid), in which ‘private [commercial] capital’ (63) play a dominant role in the world economy until the rise of industrial capital.

One of the most decisive contributions of the work resides in outlining the command of commercial capital over labour where it ‘dominates production directly’ (9), as Banaji cites from Marx’s remark on ‘the so-called colonial system’ in Volume III of Capital (1981:. 446). Akin to industrial capital, the subordination of production forms the basis of fierce competition between commercial capitals and ‘the drive to monopolize markets, vertical integration, concentration of capital, and a striving for flexibility’ (99). (These are addressed in the last three chapters which are fundamental to the whole argument of the book, admittedly a rather odd choice coming only towards the end, rather than at the beginning.) ‘The chief but not the only form this [command] took’ (85) is the ‘putting-out system’, whereby household labourers nominally own the means of production, yet are subjected to the power of capital, namely the advances made by merchant capitalists either in the form of money-capital or commodity-capital (raw materials). The advances function as wages for the reproduction of the household’s labour-power. Capital breeds more capital through the exploitation of independent labourers, not least by extracting surplus-value out of ‘vast amounts of unpaid family labour’ (110), particularly that of women and children. Although labour is ‘dispersed’ and its form of organisation ‘decentralized’ (86), merchant capitalists or commercial firms integrate numerous households in a systematic and regular manner to the point that they ‘controlled, managed, and coordinated production itself, that is, the interconnected labour processes through which the commodity was finally produced’ (Ibid). For instance, Oriental Carpet Manufacturers Limited vertically integrated thousands of household weavers across Turkey, Greece, India and Persia in the early twentieth century by dictating to them what needs to be produced, how it needs to be produced, and when it is to be delivered. Moreover, the production and circulation of extracted surplus-value by commercial capital involve ‘vast conglomerations of commercial interests’ (108) that are articulated with a ‘chain-like structure’ (Ibid). By drawing on the letters of a Liverpool merchant capitalist active in the colonial trade of cotton in Western India, Banaji shows that the surplus-value circulates through ‘petty village dealers […] who made advances to the growers’ (109), ‘wealthier dealers in the large interior towns’, ‘wholesale dealers, who financed a major share of those advances’, ‘wealthy native merchants of Bombay’, and finally ‘the export firms’ (Ibid) which bring the surplus-value extracted from colonial India to the heart of the metropolis.

This peculiar form of labour subordination through the advances made by the merchant capitalist is called by Marx ‘hybrid subsumption’ (1976: 645, 1023)–it is a category largely neglected within Marxism, especially within its Eurocentric strands. Unfortunately, Banaji does not fully elaborate the theoretical implications of the putting-out system for Marx’s category of subsumption–often misunderstood as a historical stage rather than a diverse mode or form through which capital exercises its power over labour. Subsumption is ‘hybrid’ in this case because the capitalist imperative of accumulation is superimposed upon the ‘pre- or non-capitalist’ relations of production as they are reconfigured in the service of accumulation. What distinguishes hybrid forms of subsumption from formal and real subsumption is the absence of formally free wage-labour, a fully expropriated proletariat that has nothing to sell but her labour-power. Yet, the absence of free wage-labour does not mean that hybrid forms of subsumption were merely anomalous or transient phenomena in the early history of capitalism. Nor were they simply residues from the past lurking behind the surface of capitalist modernity, in other words, ‘some dying pre-industrial dinosaur’ (85) deprived of any historical actuality. Rather, the accumulation of capital through unwaged labour, especially in the colonies, has been historically constitutive of the emergence and consolidation of capitalism. The implications of hybrid subsumption are thereby immense for the debates on the transition to capitalism in that it opens up the possibility of reconstructing a non-linear model in which capital subsumes the social forms that it inherits from pre-capitalist modes of production–such as slavery/, the peasantry and household forms of labour organisation which Banaji carefully demonstrates with respect to merchant capital.

The major problem with Commercial Capitalism is that, on the one hand, merchant capital is presented as one of, if not the, most important social agents that, hand in hand with the state, brings contemporary capitalism into being, whilst, on the other hand, there is no proper engagement with the question of the transition from pre-capitalist modes of production to capitalism. Banaji’s ‘theory of commercial capitalism’ (107) is not concerned with the mode of production in the wider sense of the term, that is, the historically specific relations of production in their totality which constitute ‘historical epochs’ governed by distinct ‘laws of motion’. In fact, this category, which was so comprehensively formulated by Banaji in Theory as History, barely appears in Commercial Capitalism. Instead, the term ‘commercial capitalism’ is employed for the formation and development of one and the same economic system that comes into being in the twelfth century and dies in the late-nineteenth century. In other words, the ‘sharp break’ (121) for Banaji happens only with ‘the age of empire’ (Ibid), ‘an entirely new sort of capitalism, driven by modern industry’ (123) with the ‘gigantic concentration of capital in cartels and trusts’ (122). It is not really clear what the distinction is, if any, between this ‘commercial capitalism’ with origins tracing back to the ‘Mediterranean capitalism’ of the twelfth century (itself, according to Banaji, a legacy of the the Medieval Islamic world) and the capitalist mode of production that has its origins within the longue durée of the sixteenth century, as shown by Marx and many others. How does the systematic and violent expropriation of labourers in Europe during the latter historical period fit into Banaji’s narrative of ‘commercial capitalism’? Banaji has become increasingly reluctant towards any talk of ‘transition’, or so-called ‘primitive accumulation’, partly because for him the question of the formation of the fully disposed proletariat is always already contaminated with a progressive, linear and teleological notion of capitalist development in which ‘real subsumption’ (industrial capital) is posited as the ultimate destination of the train of history. Yet, it is possible to reject this teleology, including that of real subsumption, and adhere to the contributions of merchant capital through hybrid forms of subsumption, whilst simultaneously maintaining the constitutive significance of the processes of expropriation for the emergence of capitalism. Neither are mutually exclusive if we conceive of the capitalist mode of production as an historical-social totality grounded on capital/wage-labour but encompassing a set of wider processes and practices (such as the state, patriarchy and colonialism) that are systematically oriented towards the reproduction of capital.

It is the critical strength of the book to map out the wider and unexplored origins of capitalism as hinted at but not fully developed by Marx in so-called ‘primitive accumulation’, that is, ‘the first sporadic traces of capitalist production as early as the fourteenth or fifteenth centuries in certain towns of the Mediterranean’ (Marx 1976: 876). Yet, it is not clear in Banaji’s account how and under what conditions this Mediterranean capitalism would lead to the full dispossession of labourers at a general level of society during the long sixteenth century. One has the impression that the capitalist mode of production has basically the same structure as commercial capitalism, with the former only as a more developed version of the latter. Relatedly, Commercial Capitalism fails to explain why only the commercial system in the West led to industrialization, while its counterpart in the East did ‘not evolve into a modern capitalist economy’ (132)–a question that Banaji raises in the Appendix (125-138) but does not provide comprehensive answers to. Whether we can speak of ‘capitalist societies’ or ‘capitalism’ before, say, 1450, is not simply a matter of ‘formal characterization’, as Banaji tends to assume. Rather, it is closely tied to social ontology, the way in which we render social reality intelligible and determine its social foundations. From the fact that the notion of capital and capitalist practices existed in the Islamic World as early as the eighth century, that the Ottoman Empire of the sixteenth century had widespread capitalist trade and complex financial techniques, does not immediately mean that these societies were ‘capitalistic’. The drive to profit and capitalist trade/production, the antediluvian forms of capital, did exist and indeed played a significant role in pre-capitalist modes of production. Nonetheless, the logic of accumulation for the sake of accumulation was not the social-ontological principle of any of these societies.

Banaji wants so badly to distance his position from the tradition of political Marxism that he throws the baby out with the bathwater. There seems to be a tension between Banaji’s recent theory/history of commercial capitalism and his earlier formulations of modes of production in which the form-determination of historical practices as mediated by a totality is given greatest emphasis. What changed between the two Banaji’s seems to be the dissolution of the boundaries between the capitalist mode of production as a historically specific social totality and the capitalist practices before the rise of capitalism.

Morteza Samanpour is studying for a PhD on Marx’s critique of political economy at the Centre for Research in Modern European Philosophy at Kingston University.