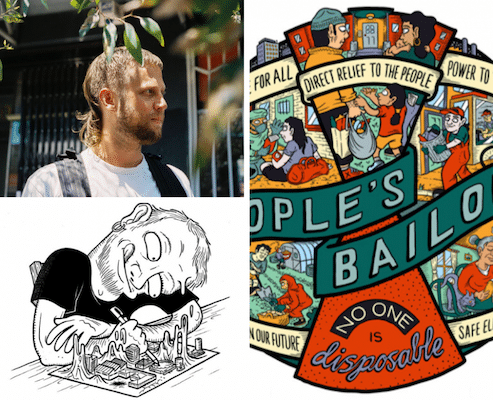 Sam Wallman is a talented political comic artist with a strong worker and union focus in his work. Based in Melbourne, he has produced pieces for SBS, The Nib, Overland, the Workers Art Collective, and a growing number of trade unions.

His breakout web comic At Work Inside Our Detention Centres: A Guard’s Story is based on interviews with an anonymous former Serco immigration detention centre guard. This person starts out naively hoping to positively influence the system from within, but quickly becomes disillusioned as he realises the particularly cruel form of mental torture that is mandatory detention. The piece was nominated for a Walkley Award and won an Australian Human Rights Award.

Winding Up The Window: The End of the Australian Auto Industry tells the story of the industry’s rise and fall, viewed through the eyes of its workers. Their working-class and migrant-background camaraderie is buttressed by strong union membership that maintains decent pay and conditions. The problematic question of the sustainability of mass car ownership and its role in climate change and urban sprawl is touched upon. A high point is the 1973 Broadmeadows Ford factory strike that led to women winning the right to join the workforce.

In late 2015, Wallman travelled to Eastern Europe to document the border crisis in Brick by Brick and in 2016 to the United States to cover the presidential election. There’s a journalistic aspect to these works that bears comparison with the graphic reportage of Joe Sacco. Other influences he cites are Mary Leunig, Matt Groening and Diego Rivera. His experience working as a union delegate and organiser for the National Union of Workers, and later as an Amazon warehouse picker, show an understanding and empathy with workers’ struggles. Other works, such as Seed Water and So Below have a more reflective and poetic quality.

Many of Wallman’s comics have been produced for website viewing and make brilliant use of vertical scrolling space with bold cross-sections and geometrical playfulness. Last year, he attended the Durham Miners Gala and the Tolpuddle Martyrs’ Festival in England. The composition of his most recent works show the influence of the late-19th-century union banners he saw there.

Working as artist in residence at the Victorian Trades Hall, with collaborator Bailey Sharp, Wallman has produced animations for the Victorian Aids Council and a short animated history of the Green Bans in Australia and beyond.

Currently in production is Wallman’s first longform graphic novel about workers’ struggle and collectivism. Influenced by his experiences at Amazon, he says it will be part labour history, ranging way back from early guilds to successes in recent decades, and part how-to manual for workers and their unions to harness the unique power we have under capitalism: the power to withdraw our labour.

Wallman proudly defends the accessibility of comics, and the form’s aim to be open to everyone. Here is an artist and activist who pierces through our usual filters to powerfully convey optimism, solidarity and the power of collective action.