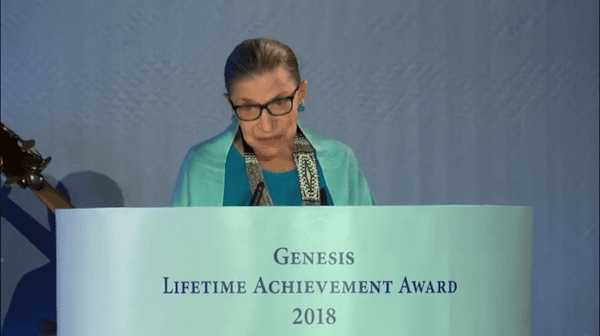 The recent death of U.S. Supreme Court judge Ruth Bader Ginsburg (known popularly as ‘RBG’) has brought accolades from all over the world, especially from progressives who hailed her positions. Even Black Lives Matter issued praise, not mentioning the justice’s crass statement on Colin Kaepernick’s taking the knee, saying the gesture was “dumb and disrespectful” (she later walked it back saying that her comments “were inappropriately dismissive and harsh” and that she “should have declined to respond”). Black Lives Matter sidestepped the incident by stating that “as a nation, we cannot politicize this moment”. But the interest in Ginsburg’s legacy is a political matter.

There is also a serious contesting of the popular legacy of Ginsburg as a kind of radical progressive activist judge. David Kinder, who appraised her record in Current Affairs in 2016, concluded that Ginsburg was basically a “cautious centrist”.

And there is more to this than domestic policy. As a Jewish Israeli citizen, I was drawn to see what legacy Ginsburg had when it came to Israel, particularly her acceptance in 2018 of the Israeli state’s Genesis Prize, which claims to be a kind of “Jewish Nobel”. She was certainly not making critical statement of Israel, and she was saying nothing about Palestinians. When it came to Israel at least, Ginsburg was just unexceptional. A real “cautious centrist”. One could even say a “progressive except on Palestine” (PEP).

Ginsburg’s nomination to the prize for the 2018 ceremony was complex. Reportedly, Netanyahu first opposed her getting it, due to her condemnatory statements on Donald Trump ahead of his election. So then, actress Natalie Portman was selected for the main prize. In order to smooth away the drama, the committee ‘tailored’ a secondary prize for Ginsburg, not involving money. The committee claim, to cover the earlier misstep, was that Ginsburg couldn’t accept a monetary prize, but that was false. Anyhow, in March 2018, Israel was massacring scores of Palestinian Gazan protesters at the perimeter fence, and that made Portman feel “very uncomfortable” with the inevitable split screen of her getting the prize from a state that was turkey-shooting unarmed protesters who were protesting their incarceration in an uninhabitable concentration camp. Portman was reserved in her snubbing of the prize: her expressed reasoning was that she did not want to appear as if “supporting Netanyahu”.

Ginsburg gave a 12-minute speech at the Genesis Prize ceremony, and did not say a word about Palestine or Palestinians. Her focus was women’s rights and it was seasoned with Jewish romanticism, even with a favorable hint to Zionism. She said that “good fortune accounts for my part in the effort to achieve equal citizenship stature for women”.

For anyone aware of the Israeli oppression of Palestinians, where even citizenship of Palestinians is discriminatory (not to mention occupation, siege and expulsion), such a sentence screams for at least a mentioning of that issue. Otherwise, the justice focus ends up as a kind of “white feminism”–where intrinsic racism is neither addressed nor challenged, and the feminism is taken to be a sufficient substitute for that omission.

While Ginsburg talked alot about Jewish history and mentioned some women to do with it, she also mentioned Zionism by name in connection with Emma Lazarus, whose sonnet “The New Colossus” of 1883 is represented on the Statue of Liberty.

“Emma Lazarus was a Zionist before that word came into vogue”, Ginsburg said. “Her love for humankind, and especially for her [Jewish] people, is evident in all her writings”.

But Emma Lazarus died in 1887. How could she be a Zionist before the actual beginning of the Zionist movement? Obviously, Ginsburg is making a romantic appraisal of Zionism as synonymous with humanism and love of kind.

Ginsburg said that Lazarus’ poem etched on the Statue of Liberty has “welcomed legions of immigrants including my father and grandparents, people seeking in the USA shelter from fear and long[ing] for freedom from intolerance”.

Once again, this appraisal of “Zionism” as a representation of some kind of open embracing of immigrants is egregious, when mirrored against the fact that it was and is a settler-colonialist movement where “transfer” was “inevitable and inbuilt” in the words of Israeli historian Benny Morris.

[B]ecause it sought to transform a land which was ‘Arab’ into a Jewish state and a Jewish state could not have arisen without a major displacement of Arab population.

Speaking at another event during the same tour, Ginsburg praised Israel’s courts for being “known throughout the world for judicial independence, and it’s something we hope we can keep”, adding that “it requires a public that understands the tremendous value of having courts that are free from any influence from the government.” She was sharing the panel with her Israeli counterpart, former Supreme Court judge Dorit Beinisch, who had coined a new de facto legal term for Israel’s never-ending occupation, calling it a “prolonged” occupation.

Reflect that Ginsburg made these statements in July 2018, just a couple of months after Israel’s Supreme Court fully supported the sniping of unarmed protesters with live fire in the mentioned Gaza protests. Israel’s Supreme Court, with all its occasional aberrations, is a notorious blue-stamp machinery that has basically endorsed all of Israel’s central occupation violations, and has even ruled against the International Court of Justice which deemed the “security barrier” (aka Annexation Wall or Apartheid Wall) illegal by international law in 2004, since the vast majority of its path ran through occupied territory (the ICJ ruling reemphasized the settlements as being contrary to international law).

Surely, Ginsburg must have realized that her acceptance of the Genesis Prize is not occurring in a vacuum, and that this is a highly political, and highly politicized, prize.

As limited as Portman’s reasoning was, it was far more impressive than Ginsburg’s whitewashing of Israeli crimes.

Ginsburg’s romanticizing of the Israeli “democracy” is unsurprising and unexceptional. For Portman, this ‘PEP’ position became somehow untenable, and she had to find a way out–it was becoming too toxic. For Ginsburg, it was certainly tolerable. As long as Palestinians were kept out of the equation and not spoken about, it was alright.

Ginsburg and Portman apparently shared an admiration of the Israeli author Amos Oz–who beneath the aura of romantic Jewish liberalism was actually a fanatical Zionist zealot. Portman had also recently filmed his “Tale of Love and Darkness”. But for all that romanticism, it became too much for Portman. Oz could rationalize the most egregious massacres of Palestinians like he did in 2014 promoting false conspiracy theories about Hamas tunnels leading into Israeli kindergartens–but for Portman the prospect of receiving the Genesis prize was already “not comfortable”. For Ginsburg, it was fine.

I am certainly not idolizing Natalie Portman. I think she is egregiously understating. But I think the comparison serves to show, that Ruth Bader Ginsburg was a rather unexceptional person. She could have used her last years to make a strong statement about Palestinians, but she didn’t. She could have done it with hardly a word–by for example refusing the prize. But she didn’t. This doesn’t make her exceptionally mean in the relativity of the current USA paradigm, where Israel is an issue that hardly any leading official or celebrity may challenge–it just makes her unexceptional.

And that’s where I leave it. It’s very similar similar with current ‘liberal’ leaders such as Joe Biden and Kamala Harris–they may have all kinds of heroic agendas for USA domestic policy, but when it comes to Israel, they are unflinching in their support of its Apartheid, and despite some small disagreements here and there, Biden “loves” Netanyahu, and Harris often speaks as if she wer Netanyahu’s spokesperson.

Ginsburg is definitely what we could call a ‘liberal Zionist’. She manages to bridge the disparity between humanism and colonialism by romanticizing the humanity, accentuating Jewish persecution, and ignoring Palestinian persecution. On that issue, she simply did not want to go any further, which confirms what David Kinder said about her being a “cautious centrist”. As far as Israel and Zionism go, she was certainly not going to take them to task.