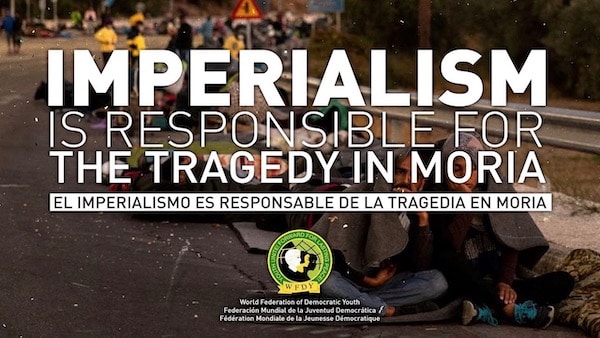 Progressive sections across Europe hit the streets demanding immediate evacuation of Moria and other migrant hotspots, and immediately granting asylum to refugees. (Photo: via WFDY).

Around 13,000 refugees in the fire-ravaged camps in Moria are a living testimony to the criminal insensitivity and war-mongering backed by imperialist powers and EU-sponsored neoliberalism across the world. On September 8 and 9, consecutive fires destroyed close to 70% tents and other materials in the Moria refugee camp on the Greek island of Lesbos. As the Greek security forces and other authorities are busy evicting the shelterless refugees following the fires, EU policy makers bear the responsibility for the massive human tragedy, which has occurred in the midst of a raging pandemic. Various rights groups, progressive political sections and fact finding teams have in the past repeatedly alerted the authorities of the precarious living conditions in the overcrowded camps in Moria, and have demanded relocation of the refugees to the European mainland, especially children and pregnant women.

The Moria refugee camp located in the southern Greek island of Lesbos is among the largest refugee camps. It is highly overcrowded due to the continuous inflow of refugees, mainly those fleeing the ongoing conflicts in West Asia caused by imperialist intervention. The camp, which has a capacity to accommodate around 3,000 people, was accommodating as many as 20,000 refugees at one point of time. This has put the lives of the inhabitants, including women, children, and the elderly, at grave risk. Inmates live in precarious, unhygienic and psychologically stressful conditions.

In 2016, Turkey agreed to a deal with the EU to control the huge transit of refugees through its borders to mainland Europe. The deal was struck in return for EU funds, visa liberalizations, and the resumption of EU accession talks for Turkey. The overcrowding at Moria was a direct fallout of this deal and the closure of the Balkan Migrant Route to Europe. Refugees who sailed across from Turkey to the southern Greek island–which has become a gateway for the West Asian refugees to Europe–are placed in Moria for long periods of time till their applications for asylum are approved. The refugees are subjected to congested living conditions, mistreatment from the authorities, and attacks from hostile locals. Many have become casualties in intermittent fires and face repression from security forces in case of protests, most recently to register their grievances amid the COVID-19 pandemic.

In the wake of the crisis, the EU leadership is busy scheduling a New pact on Migration and Asylum–reportedly no better than the one which already exists. Regarding the finalization of the new pact, on September 24, Member of the European Parliament (MEP) from the Communist Party of Greece (KKE), Konstantinos Papadakis, accused the EU of exploiting the victims of its own imperialist interventions. Refugees fleeing imperialist wars are sorted out, detained, and deported, in violation of even the individualized asylum application. Those who succeed in passing through the asylum-seeking process become “talents” for cheap exploitation, as per Papadakis.

“We say close all hotspots now. Immediate transfer of refugees and migrants, according to all health protocols, to mainland Greece for temporary human accommodation, in order to go to their final destination countries with recognition of the right to file asylum applications there,” he added.

Progressive sections across Europe have already hit the streets demanding the immediate evacuation of Moria and other migrant hotspots, and to provide refugees asylum in European countries. Leftist sections and rights groups marched in Frankfurt and Berlin to call for the immediate and increased intake of refugees.

The World Federation of Democratic Youth (WFDY) stated that imperialism must be held responsible for this tragedy in Moria. Imperialist wars of the US-led NATO alliance, co-sponsored by the EU, have turned millions of people into refugees. This is compounded by the inhumane policies on migration and asylum propagated by the same clique, which is strangling the lives of those who become refugees due to imperialist wars, the organization said.