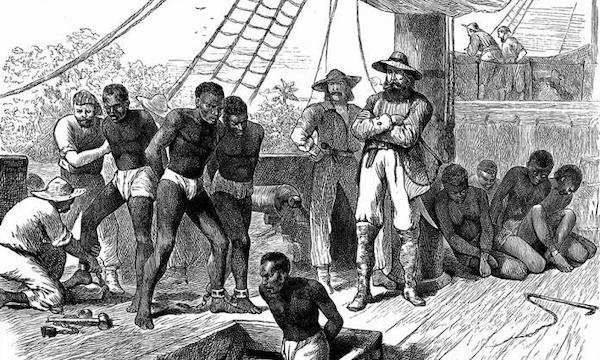 French historian Pierre de Vaissière’s description of a slave ship working the Atlantic trade in Saint-Domingue: Creole society and life under the Ancièn Regime, 1629-1789 cannot be forgotten: the hold below is hellish, naked bodies are chained, thrown back and forth by the middle passage seas, excrement is smeared about, and death feels a mere breath away. The captain decides to execute a Black man and woman for insubordination. The captain slits the man’s throat, before ripping out his heart, liver and entrails, cutting them up into 300 pieces and forcing the slaves aboard to eat them. The captain then has the woman suspended on a mast and whipped, and a crewman slices a hundred cuts straight to the bone, draining her body of blood.

Such gruesome acts were designed to crush the ship’s captive souls and to ensure their bodies would labour obediently under the master’s whip when they were offloaded in the “new world”. Only in this way could traders effectively perform their role in the slave system of newly developing capitalism, supplying Europe’s coffee houses and its sugar and tobacco addictions.

An estimated 12 million people were taken at gunpoint from West Africa and sold into slavery, forced to work on the colonial plantations producing the raw materials for European industry—a practice that shaped the modern world. It was an indispensable feature of modern capitalism’s development and gave rise to a particular form of racism rooted in the racialised nature of exploitation on the sugar, cotton, tobacco and coffee plantations.

Black resistance to slavery occurred wherever the institutionalised barbarism of the slave trade settled, although you wouldn’t pick that up from most histories. As the Black Trotskyist C.L.R. James put it, the “only place where Negroes did not revolt is in the pages of the capitalist historians”. These revolts were far from minor—uprisings on board slave ships saved an estimated 500,000 Africans from the traumatic middle passage and from being worked to death on the plantations. In 1760, a major revolt by slaves in Jamaica rocked the British Empire’s control of the Caribbean, coinciding as it did with the Seven Years War in which Britain and its allies were fighting a bloc led by France.

Slavery was ended through a combination of this sort of resistance in the Caribbean and revolutionary struggle in the “metropolis” (capitalist centres like Paris). The emerging capitalist ruling class did not just spontaneously decide to oppose slavery–its deeply entrenched institutional and economic structures had to be broken by uprisings from below, leading to revolutionary crises, or at least their threat, to be successful.

Liberal abolitionist circles like the Society of the Friends of the Blacks (founded in France in 1788) were no substitute for the mass struggles of the Great French Revolution of 1789, for example. Two-thirds of French trade was with colonies, and the slave system that underlay it would not be easily given up. Throughout the revolution, many liberal abolitionists favoured a compromise whereby property owning “mulattoes” (free people of mixed race) would be given equal rights, while 500,000 slaves remained in chains.

The outbreak of revolution—in France in 1789 and two years later in the French Caribbean colony of Saint-Domingue (now Haiti)—fundamentally altered the terrain. The Black slaves of Saint-Domingue faced severe repression, but they refused to be cowed. “Led from beginning to end by men who had themselves been slaves and were unable to read or write, they fought one of the greatest revolutionary battles in history”, wrote C.L.R. James in his classic account of the revolution, The Black Jacobins.

Before the revolution they had seemed subhuman. Many a slave had to be whipped before he could be got to move from where he sat. The revolution transformed them into heroes.

The revolt on Saint-Domingue forced the issue of abolition into a prominent position amid the revolutionary tumult back in France. The French National Convention passed the “Universal Emancipation decree” in 1794, which granted freedom and equal rights to slaves in all French colonies. This put a major dent in the most lucrative sources of wealth provided by the Atlantic slave trade, shaking early capitalism to its core.

For the Black slaves fighting to overthrow their white masters, the slogan “liberty or death” was all too real. They fought with a courage and passion that inspired radicals around the world, and went well beyond their European contemporaries in their commitment to human liberation. Historian Laurent Dubois argues that the Haitian Revolution was “the most radical (and therefore one of the most important) assertions of the right to have rights in human history”. The revolution invented the notion of universal emancipation, which until then had been limited by the blindness of European thinkers to the humanity of slaves and other subjugated peoples.

The limitations of the French Revolution itself in this regard were brought home by the fact that, while the Jacobins decreed the abolition of slavery in 1794, in 1801 Napoleon sent an invading force to Haiti to restore it. As the new century dawned, the need to establish order on an exploitative capitalist basis was paramount, and the high ideals of the first years of the revolution were left behind. “The blacks were taking their part in the destruction of European feudalism begun by the French Revolution”, James wrote, “and liberty and equality, the slogans of the revolution, meant far more to them than to any Frenchman”. Unlike the French bourgeois gentleman, who would hide the Declaration of the Rights of Man and of the Citizen in his pocket if it clashed with the lucrative colonial trade, freedom was more than a slogan for the Haitian slaves.

Revolutionary anti-slavery put an end to the most lucrative sources of wealth for European capitalism. The defeat of the British Empire and Napoleon’s armies (as well as the French colonists and nobility) was a precondition for abolition and emancipation. It is the greatest of modernity’s traditions, making the notions of equality, freedom and universality far more concrete than struggles in the European cities ever did.

The Haitian Revolution went further than the American War of Independence and the Great French Revolution in its commitment to universal human emancipation. Haiti was the first nation to abolish slavery unconditionally and deliver on the promise of emancipation. Too often this fact is forgotten: that the greatest revolution of the era was Black.

Like today, slavery-era capitalism thrived on the racialised as well as class-based division of human beings. Blacks and whites were divided. Those stolen from one part of the world were separated after transportation. Africans were separated from creoles: the upper echelon of slaves from the field workers, blacks from mulattoes, slaves from free people of colour. Because of this, class solidarity and anti-racism tended to feed off each other.

This was brought to light by the “freedom suits” of the 1760s and 1770s, which were legal actions brought against wrongful enslavement in England, North America and France. As historian Robin Blackburn writes in The American Crucible:

The plantation boom had given rise to hundreds of thousands of mariners and dock workers, mainly white but also significant numbers of people of colour. Those of different backgrounds learned from one another. Faced with the rigours of shipboard discipline, they also learned to stick together. When the sailors in the Port of London went ‘on strike’ in 1768—that is, struck their ships’ sails—they added a word to the English language. They could easily see that it was better to negotiate with employers who did not have slaves. Slaves in such major ports as London, Glasgow, Boston, Philadelphia and New York found supporters willing to help them bring freedom suits. And there were enough victories to deter slaveowners from bringing more slaves to these centres. This helped check the spread of slavery… and served as a necessary prelude to abolitionism. The proportion of slaves fell, and the proportion of free coloured workers grew, in most of the major Atlantic ports. By the last decades of the eighteenth century the authorities were worried that these concentrations of ‘masterless men’ (and women) constituted a danger to the status quo and that the port towns were a haven for runaways.

A similar dynamic is evident during the second upsurge of abolitionism in the period from the mid-nineteenth century to the U.S. Civil War. Links of solidarity between Black and white workers in the northern U.S. states had already been evident before the outbreak of the war. This process was accelerated by the war itself, in which hundreds of thousands of Blacks and former slaves joined the fight on the side of the Union.

This solidarity extended to divisions beyond race and class. As leading abolitionist Frederick Douglass wrote in 1881: “When the true history of the anti-slavery cause shall be written, women will occupy a large space in its pages; for the cause of the slave has been particularly women’s cause”. The Grimke sisters, pioneers of women’s liberation and abolition, also recognised this. “Until he [the Black slave] gets his rights”, proclaimed Angelina Grimke at a meeting in support of the Civil War effort in 1863, “we shall never have ours”.

On the other side of the Atlantic, the Lancashire textile workers—hungry and impoverished—gave their undying support to the North to end slavery during the Civil War. At London’s largest pro-North demonstration, an Irish stonemason named Connolly said, “Like our brothers in Lancashire, we would rather perish than band ourselves in unholy alliance with the South and slavery”.

Racism today is no longer underpinned by slavery. But the struggle that was required to win abolition nevertheless has relevance to modern struggles for racial equality.

Racism is a material and social fact built into the structure of capitalism. It will not wither away without struggle. This is why movements like Black Lives Matter, whatever their weaknesses, remain absolutely central to any strategy for change. In contrast to those who dismiss such struggles as distractions from the workers’ movement, the anti-slavery struggle shows how the two are symbiotically related.

C.L.R. James once said that revolutionary Marxists had to grasp the role Black struggle played in the transformation of Western society from feudalism to capitalism, because “It is only from this vantage-ground that we shall be able to appreciate (and prepare for) the still greater role they must of necessity play in the transition from capitalism to socialism”.

Racial division remains central to the maintenance of bourgeois power in modern capitalism. Those wanting to overthrow this system must be a part of mass anti-racist struggles when they arise, and play a role in pushing them forward and deepening their understanding of the enemy they are up against and what it will take to defeat it.