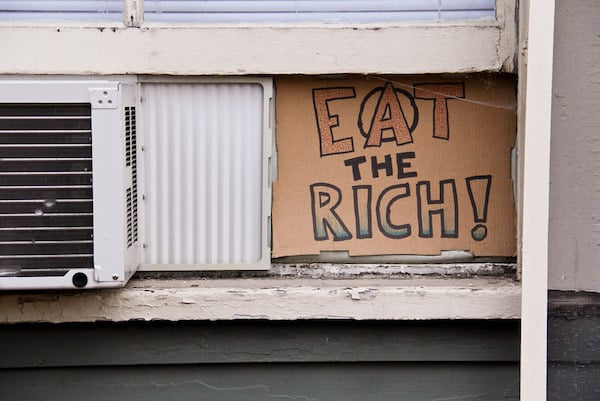 A new report–Riding the Storm, billionaires insights 2020–by UBS and PwC reveals that the world’s uber-rich have increased their already-huge fortunes by more than a quarter; and this “miracle” happened amidst the ongoing pandemic ravaging life of billions of the poor in continents.

Wealth of this handful of uber-rich, according to the report, grew by 27.5 percent–$10.2 trillion–during April-July period. That was the apex point of the Covid-crisis.

According to the UBS, the billionaires had mostly benefited from betting on the recovery of global stock markets.

The report noted: Wealth of the billionaires had hit “a new high, surpassing the previous peak of $8.9 trillion reached at the end of 2017.”

One note in the report said:

As at 31 July 2020, the number of billionaires was 2,189. The billionaire population grew by 131 during the period when financial markets rebounded in 2020. There were 2,058 billionaires just four months earlier on 7 April 2020, which is [the study’s] standard cut-off date. For this year’s research [the study has] extended it to 31 July 2020, to take into account the transformative effect of COVID-19.

The report, seventh in the series on billionaire wealth, is, as it claims, “continuing […] investigation into this historic era of wealth generation.”

The “research universe covers more than 2,000 billionaires from 43 markets in the Americas, EMEA and APAC, looking back over more than two decades.”

Its “database includes the 43 largest billionaire markets, which account for around 98% of global billionaire wealth.”

Further, the research “conducted about 60 conversations with billionaires.” Its “research sources include PwC billionaire data and UBS sustainability ratings.”

“Additionally, reflecting the transformative effect of COVID-19 on billionaire wealth, where relevant”, says the report, it has “extended this year’s standard annual study period that ends on 7 April 2020 to include the five extra months to 31 July 2020.”

The methodology, based on the description above, seems not hostile to the billionaires.

Fortunes are polarizing as business innovators and disruptors deploy technology to be among the leaders of today’s economic revolution. During 2018, 2019 and the first seven months of 2020, entrepreneurs in the tech, healthcare and industrials sectors pulled ahead. The COVID-19 storm accelerated the divergence.

Scientists, computer programmers and engineers are revolutionizing industries at a pace never seen before. Their sphere of activity is spreading from the tech and healthcare sectors to disrupt many parts of the economy. As they apply emerging technologies to drive change, some of them are becoming billionaires.

These are significant findings, which tell a lot about the way capitals behave and pocket money. And, also, the source of this huge money.  It’s its strength. Its weakness also resides here. A major task is, not slogan mongering, but to find out this strength and weakness of the capitals getting fatter during a crisis period.

The report told an interesting, actually a confusing” fact as it identified a trend as “Record-breaking donations”:

To tackle the pandemic, billionaires have given more than ever before in a space of a few months. Some 209 billionaires have publicly committed a total of USD 7.2 billion, whether in financial donations, manufactured goods and equipment, or other commitments.

Amazing! A lot of donations!!

Is it donation? Is it benevolence? Is it love for the suffering people?

No, this, the “Record-breaking donations”, is for reproduction of capital, for sustaining the relations, the conditions that facilitate producing profit, skyrocketing profit.

The function of entrepreneurs is to reform or revolutionize the pattern of production by exploiting an invention or, more generally, an untried technological possibility for producing a new commodity or producing an old one in a new way, by opening up a new source of supply of materials or a new outlet for products, by reorganizing an industry and so on,

But, the fact, which is ignored is:
Which one is exploited–is it an innovation or labor? What has innovated the innovation? Isn’t it labor?

Let’s assume: From thin air, an innovation–artificial intelligence (AI) to 3D printing, from nanotechnology to biotechnology–has come into existence. But, there’s no unfortunate soul to put their labor power behind that innovation to bring it to life–make it move and create some miracle of making money huge in quantity.

How the entrepreneurs would “reform or revolutionize the pattern of production”?

Moreover, what produces the innovation? Isn’t it labor in an entire society?

Then, who pays to the “good souls” for the “good souls’” profit–a huge money to re-invest, to indulge in luxury unimaginable to the unfortunate ordinary persons having no access to the information related to that luxury, and to show “benevolence”–make “donations, spend money for “philanthropy”?

Has the “pattern of production”, as the Austrian economist, Schumpeter describes, been changed with the innovations? There’s change in speed–a significant factor in increasing exploitation and profit making–in production, marketing, etc. that includes confusing and manipulating “mind”, brains of consumers. But, are not the relations of production, the relations the commodities establish unchanged?

The section 1–“The great polarization”–of the report said:

It’s a time of accelerating change, reflected in the polarizing fortunes of billionaires.

Those that are the innovators and the disruptors, the architects of creative destruction in the economy, are still increasing their wealth.

Other billionaires, on the wrong side of economic, technological, societal and environmental trends are becoming less wealthy.

Contrast this polarization with most of the past decade, when steady growth and buoyant asset prices lifted billionaire wealth in all sectors. Most of the decade was a time of exceptional prosperity for billionaires regardless of sector, but in the last two years those using technology to change their business models, products and services have pulled ahead. The COVID-19 crisis just accentuated this divergence.

While business innovators and disruptors are deploying technology for competitive advantage across all sectors, naturally the heart-land of this activity is the technology, healthcare and industrial sectors, which clearly signal the polarization taking place. During 2018, 2019 and the first seven months of 2020, 4 technology billionaires’ total wealth rose by 42.5% to USD 1.8 trillion, supported by the surge in tech shares. Meanwhile, healthcare billionaires’ total wealth increased by 50.3% to USD 658.6 billion, boosted by a new age of drug discovery and innovations in diagnostics and medical technology, as well as latterly COVID-19 treatments and equipment. (The standard analysis period has been extended to take into account the effects of COVID-19.)
“Compare this to the smaller increase for the billionaire class as a whole. It rose by 19.1% to USD 10.2 trillion over 2018, 2019 and the first seven months of 2020.

The net wealth of billionaires in entertainment, financial services, materials and real estate sectors lagged the rest of the universe, with increases of 10% or less.

Second, the question of appropriation/exploitation is not considered on the basis of individual or a group of exploiters. Rather, the issue is considered on its entirety–the entire exploiting class, the uber rich billionaires are part of it.

Therefore, higher profit in one area and less profit in another area doesn’t make any change in the mathematics of appropriation/exploitation.

The important aspects that come out of the fact related to the two groups of billionaires–one group make more and the other less–are:
(1) The exploiting classes has not ceased or even lessened appropriation/exploitation during this on-going pandemic period, which has been termed as “one of the largest humanitarian catastrophes in recent times” by the International Federation of Red Cross and Red Crescent Societies (IFRC). It’s situation with, as the IFRC said, “1 million individual tragedies and countless heartbreaks”.

So, Josef Stadler, the head of UBS’s Ultra High Net Worth department, said:

Billionaires did extremely well during the Covid crisis. Not only did they ride the storm to the downside, but they also gained on the upside.

Stadler has admitted that the uber rich were able to benefit from the crisis.

This acquisition of “benefit” is at the cost of the workers and nature, who produced the wealth.
And, these workers, millions going through untold suffering–unemployment, and consequently, hunger, loss of shelter, lack of health care, fear of murderous uncertainty–in countries, go unheard, unattended, non-politicized, unaware of class question, appropriation/exploitation. Rather, they are manipulated, divided, segregated, infused with anti-worker ideas, concepts and attitudes.

Shall it go this way forever?

Stadler provides the answer with a question similar to the question made above: “Is there a risk they [the billionaires] maybe singled out by society? Yes.”

Stadler goes a bit farther with another question: Are they [the billionaires] aware of it [singling out]?

And, again, Stadler has the answer: Yes.

But, the question that will follow is: What shall follow after the “yes”–awareness of the billionaires? It’s a major question related to the classes appropriated/exploited, but ignored by many political trends, ideas, ideologies–the rightists, the politics related to this system of exploitation. As a tact of “ignorance”, these trends, ideas, ideologies never enter into the question of exploitation, exploiters, exploited, and raise other divisive issues, confusing questions. And, a group of “progressives” faithfully follow this “ignorant” group.

(3) Is this–the new area of making higher profit as shown by this latest finding on a group of billionaires–the dominant trend in the global capitalism?

It’s a significant question, which has to be searched. With a single finding, with a finding based on a certain single period–a few months/years–the answer shouldn’t be made. The answer to the question will determine a number of slogans in class struggle, the struggle the exploited classes carry on.

Whatever happens regarding the trend of higher profit-seeking capital, the fundamental question of exploitation don’t get wiped out. On the opposite, the question remains as one of the burning questions in the economic and political struggle of the billions of the exploited. Whoever doesn’t raise this question, whoever ignores this question stand for the exploiters, stands against the exploited.