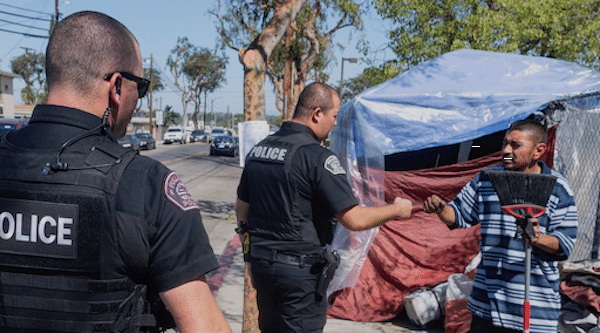 Activists say these ordinances for minor violations are rooted in racist laws and anti-homeless policies.

The Los Angeles police department (LAPD) gave 63% of its citations for “loitering while standing” to Black residents in recent years, despite African Americans making up just 7% of the city’s population, a new analysis of public records has revealed.

A report released by the Lawyers’ Committee for Civil Rights analyzed low-level infractions in California between 2017 and 2019 and found that LAPD and police agencies across the state disproportionately target Black residents. The advocacy group collected data on the most minor municipal offenses and tickets (outside of traffic citations)–including standing or sleeping outside, owning a dog without a proper license, jaywalking and entering a park after dark–and found a pattern of severe racial disparities in major cities and regions throughout the state.

* Black residents in LA were 3.8 times more likely to be cited for minor infractions compared with white residents, accounting for 30% of all low-level infractions.

* Despite being only 7% of the adult population, Black Angelenos accounted for 27% of “drinking in public infractions”, 33% of “sleeping or sitting” loitering tickets; and 63% of “loitering while standing” citations.

* There were similar patterns of disparate treatment of Black residents in liberal and more conservative regions of the state, including in the Bay Area, the Central Valley, Kern county, San Diego and other municipalities.

The report comes amid growing scrutiny of police violence and harassment, with advocates arguing that the enforcement of these offenses can lead to brutal and even deadly interactions with officers. The citations also disproportionately target unhoused people and can lead to devastating fines and debts that can escalate to warrants, arrests and jail time.

The analysis suggests that in some neighborhoods and communities, “it’s illegal to be Black in public”, said Elisa Della-Piana, legal director of the Lawyers’ Committee for Civil Rights (LCCR) of the San Francisco Bay area, and co-author of the report.

It causes lasting trauma, especially to be stopped repeatedly by police when you were doing nothing wrong, as is the case with ‘loitering’ and ‘sleeping’.

People are regularly fined between $250 and $500 for these types of offenses, and the state currently has more than $10bn in uncollected infraction debts, meaning thousands of people could face arrest due to these minor violations, LCCR said. While some jurisdictions use these laws to target homeless residents, other municipalities enforce these ordinances as a way to collect revenue, according to the report.

“What started as, ‘I’m here in a public space minding my own business not harming anyone’, can quickly become a trap that causes financial and physical harm,” Della-Piana said, adding that she was struck by the comparable trends in different parts of California:

There are similarities across the state in how banal the behaviors are that we’re punishing with very serious consequences.

In Long Beach, south of LA, Black residents face significantly higher rates of citations for jaywalking, riding a bike on a sidewalk, and smoking at a bus stop, for example. (A spokesperson for the department said “racial profiling is unacceptable and against the law and our policies”, and noted that the city was reviewing enforcement trends as part of a racial equity initiative.)

In Modesto in the Central Valley, a majority of dog-related citations appeared to go to Latinx residents, even though they are a minority in the city.

Between 2017 and 2019 in Hayward, east of San Francisco, every single citation for marijuana possession was to a person of color, the majority of them Black, despite the fact that white people comprise 34% of the population and Black residents 11.9%. (Marijuana possession is legal in California, but not for people under 21, which is probably why these citations are still happening.)

Often the disparities are a result of officers overpolicing Black and immigrant communities, Della-Piana said. In LA in particular, there have been numerous recent examples of the potential deadly consequences. Last month, two deputies with the Los Angeles sheriff’s department fatally shot a bicyclist, 29-year-old Dijon Kizzee, who was fleeing after officers tried to stop him for allegedly riding in the wrong direction.

LAPD and other police agencies did not immediately respond to requests for comment on the report. In the face of data analyses last year showing significant disparities in stops and searches, LA police and city leaders argued that aggregated data does “not define or describe the circumstances of each stop or search” or “prove” racial profiling, and pointed to reform efforts, such as implicit bias training.

Activists, however, say these ordinances for minor violations are rooted in racist laws and anti-homeless policies passed with the explicit purpose of targeting certain demographics.

As calls to “defund police” have continued to spread since George Floyd’s death, Della-Piana said she hoped local legislators would look at this category of citations as a starting point.

This is a really straightforward place to say there should not be police contact, and we should not risk police violence over this kind of everyday behavior. We can repeal these laws.

Sam Levin is a correspondent for Guardian U.S., based in Los Angeles.