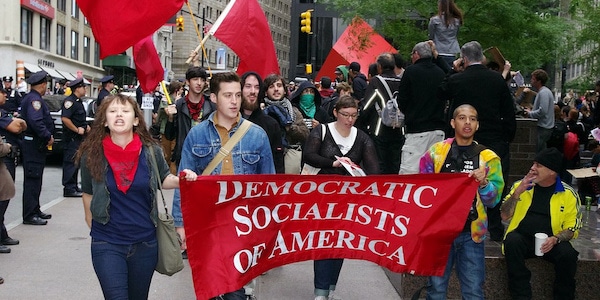 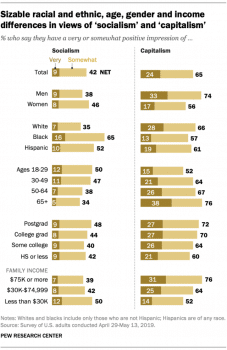 Socialism is more popular among people of color, younger people, people with more education and people with less money (Pew, 6/25/19).

Ever since the Great Recession in 2008, and accelerating with Sen. Bernie Sanders’ 2016 presidential run, there has been a resurgence of popularity and interest in socialism in the US, and an increasing skepticism of capitalism. A 2019 Pew poll (6/25/19) reported that 42% of respondents had a favorable view of socialism, with particular sympathy shown among people who are Black (65%), Latino (52%), have family incomes below $30,000 (50%) or are between the ages of 18-29 (50%). In a 2019 Gallup survey (12/18/19), 38% saw socialism positively—more than the 34% who identify as conservatives (Gallup, 7/27/20). Gallup (11/25/19) noted that Millennials were especially attracted to socialism, with slightly more viewing socialism positively than capitalism.

Democrats across the country view socialism more positively than capitalism, with a large majority willing to vote for a socialist as president. Despite questions of what the term “socialism” means to Americans, this growing interest has provoked articles decrying the “problem” that socialism doesn’t freak out Democratic voters the way it does other Americans (Slate, 2/24/20). The Columbia Journalism Review (5/8/18) noticed that while “the radical left in the U.S. has felt invigorated in recent years,” it still hasn’t “earned left-wing voices column inches in most mainstream outlets,” with coverage limited to being “about those voices, rather than by them.”

Looking at the representation of socialism among the hundreds of pundits in corporate media, one can be forgiven for almost thinking socialist pundits don’t exist.

The New York Times opinion writer Elizabeth Bruenig appears to be the only pundit employed by corporate media who both explicitly identifies as a “socialist” and makes arguments for some form of socialism in the U.S. (Washington Post, 3/6/18).

Laurence O’Donnell, host of MSNBC’s Last Word, identifies as a “practical European socialist,” and argues that “we’re all socialists now,” because even Bill O’Reilly is in favor of “socialist programs” like Social Security and Medicare. The MSNBC host claims to “embrace” the label in order to “counterbalance” the excessive influence of McCarthyism in the U.S. (LA Times, 3/16/13), but it’s difficult to discern a distinctly socialist perspective in his commentary. 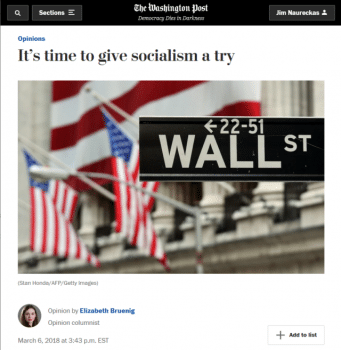 Straightforward advocacy of socialism is something you very rarely see in corporate media (Washington Post, 3/6/18).

The Hill’s Krystal Ball (2/17/19), cohost of the show Rising, criticized Trump’s remarks claiming that “America will never be a socialist country” for presenting the false dichotomy of “smash-and-grab capitalism” or “what’s happening in Venezuela.” The class-conscious commentator described Sanders and other democratic socialists like Rep. Alexandria Ocasio-Cortez as “messengers for a compelling message with an actual vision.” Although she seems not to explicitly embrace the “socialist” label like Bruenig or O’Donnell, it may be fair to describe her as a democratic socialist pundit, because she often speaks favorably of the ideology, and provides a friendly platform to socialists on her show.

It appears corporate media give some degree of space for pundits to call for replacing capitalism with a new system, so long as they don’t identify themselves or that new system as “socialist.” Times columnist Michelle Alexander hasn’t explicitly identified as a socialist, but has argued (6/8/20) that “transforming our economic systems” is necessary to achieve “racial justice” and a “secure and thriving democracy,” while approvingly citing figures like W.E.B. Du Bois, Albert Einstein, Hellen Keller and Paul Robeson, all of whom argued that the U.S. “must move toward some form of socialism.” The Post’s Katrina Vanden Heuvel also hasn’t called herself a socialist, but has argued (12/10/19) that “capitalism is broken,” and that we need a “new system to better serve the common good,” without describing this new system as “socialism.”

Although CNN’s Van Jones was involved in the early 1990s with Standing Together to Organize a Revolutionary Movement (STORM), a defunct Maoist Bay Area group, since 2000 or so, he’s identified with the “green capitalist” movement instead (Green America, Fall/2007).

“Socialism” itself is a very contested term, and many self-described socialists may not consider some or all of these pundits to be genuine socialists. Conservatism is also a broad range of ideologies, not all of which are consistent with each other, which also has self-identified conservatives who denounce others as unworthy or inconsistent with the label (New York Times, 1/14/15; The Hill, 12/16/19). Conservative audiences are not expected to approve of all pundits who identify as conservatives, or who speak favorably of conservatism. Likewise, while some socialists may be unsatisfied with these figures, it is still significant that there are pundits who embrace being labeled a “socialist” and explicitly call for alternatives to capitalism within the US.

Venezuelan opposition figure Juan Guaidó has remarked that “socialist” figures like Ocasio-Cortez would be considered social democrats in his own country (New Yorker, 6/10/20). The Times’ Paul Krugman (2/13/20) is no socialist, but he has criticized Bernie Sanders for presenting himself as a “socialist,” rather than a “social democrat,” making himself “an easy target for right-wing smears.” 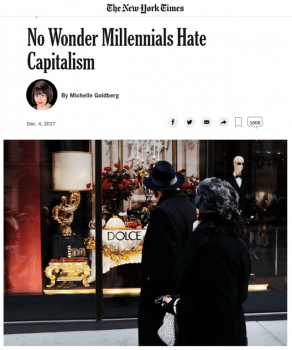 One can find criticisms of capitalism in corporate media, but that is ideologically consistent with liberals or progressives who call for government intervention to deal with market failures. Columnists like the New York Times’ Michelle Goldberg (12/4/17), who noted that “capitalism looks like the god that failed” to young people because of the “increasingly oligarchic nature of our economy,” and the Times’ Nicholas Kristof (5/23/20), who condemned “dog-eat-dog capitalism for struggling workers and socialism for the rich,” are critics of capitalism in corporate media who aren’t necessarily calling for socialism.

Other pundits have normalized socialism by claiming it already exists in a limited form, because they conflate all government spending on social programs with socialism—not advocating for socialism so much as claiming that it already exists in the US. Thus the Times’ Roger Cohen (3/8/19) and the Post’s Catherine Rampell (3/21/19) argue that “Europe” demonstrates how “socialism and the free market are compatible,” and dismiss the capitalist/socialist dichotomy as not being a “meaningful binary,” because “all modern countries have elements of capitalism and socialism.” These pundits make arguments similar to O’Donnell’s, defending a socialism that’s hard to distinguish from liberalism, though without identifying with the label as O’Donnell does.

A few other commentators have praised socialism and defended figures who identify as socialists. MSNBC’s Chris Hayes defended Bernie Sanders from McCarthyite criticisms, and praised the Democratic Socialists of America. MSNBC’s Stephanie Ruhle has made remarks on-air that appear to defend democratic socialism, in addition to explaining why it is a more desirable alternative to communism (NBC News, 2/27/20). The Washington Post’s Eugene Robinson has written several columns urging Democrats to embrace the party’s more progressive base (7/2/18, 7/1/19), and described “democratic socialism” as something that is “perfectly appropriate” for Ocasio-Cortez’s district, in addition to endorsing (1/15/15) Martin Luther King, Jr.’s call for “economic equality”—which King suggested could be called “democratic socialism” (In These Times, 1/15/18).

Like Hayes and Ruhle, Times’ columnists like Jamelle Bouie and Farhad Manjoo have published numerous columns that appear to praise socialism or policies associated with socialists, but that appears to be the farthest they can go, as neither of them have ever embraced the label (New York Times, 2/6/19, 2/14/19, 10/22/19, 3/11/20). 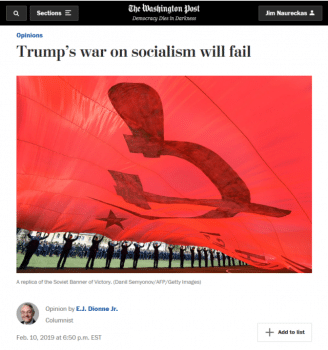 When socialism or socialists are discussed favorably, or at least not adversely, it’s often in opposition to revolutionary socialist ideologies like Marxism-Leninism (the official ideology of around 20% of the world’s population, and of the US’s greatest geopolitical rival). Democratic socialism is often contrasted with socialist states of the Global South, whether Communist countries like China or Vietnam, or multi-party systems like Venezuela or Nicaragua, which are frequently presented by even the left-most pundits as justifiable targets of imperialism. Instead, wealthy, predominantly white Scandinavian countries like Denmark and Norway are often upheld as the preferable socialist ideal (New York Times, 4/27/19).

Although the Washington Post’s E.J. Dionne Jr. (2/10/19) argued that Trump and the Republican Party’s attempts to tar all Democrats as “socialist” and antithetical to “American values” will fail because “open advocacy of socialism is now a normal part of our political discourse,” it’s quite clear that McCarthyism is still constricting political discourse in the US. While socialism is being discussed more often, there’s a huge disparity between its acceptance among the U.S. population and the representation of socialists among pundits at the biggest news outlets in the country. There are almost no pundits employed in corporate media who feel comfortable openly identifying as a socialist and calling for socialism as an alternative to capitalism.

Perhaps it’s no surprise that corporate media outlets owned by oligarchs and the investor class are hostile to socialism, but when socialist pundits are virtually nonexistent at these agenda-setting outlets, despite 76% of Democrats being willing to vote for a socialist, it’s clear that these institutions are intended to propagandize the U.S. population into accepting the status quo. Even when politicians and policies often described as “socialist” are presented in a positive light, the fact that these journalists are uncomfortable embracing the label is evidence that McCarthyism still exercises a formidable restraint on the U.S. political imagination and discourse.