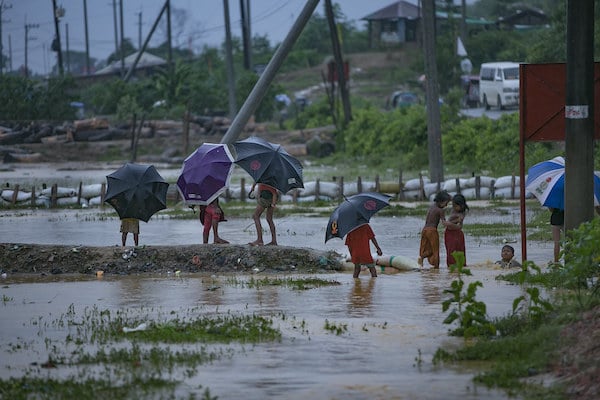 And some capitalists regularly, every day and all the time, exploit and expropriate the environment and nature. The powerful actors encroach on public land, including river and canal banks, and forest, stealthily and, at times, with an advantageous collusion, overtly devour hills and hillocks, use river and groundwater as coolant for machines and for the production of commodities, pump out warm water discharged from machines and harmful chemical-filled effluents into public water bodies, including rivers and canals, dump wastes on public land and the land of unorganized citizens weak in terms of political power, spew smoke filled with fatal gases into air, extract and, at times, export sand and carry on many such acts of encroachment–acts of exploitation and expropriation. This is a very general, broad and brief description of the exploitation and expropriation of nature and the environment and ecology–the commons, the ‘elements’/areas/spaces owned by Bangladeshis. A closer look, not presented in this article, will portray a much complex and cruel, barbaric picture–a process of capitalist economy.

These facts tell that the Bangladesh environment is a two-sided story: (1) resistance, reinvigoration and rejuvenation, and (2) exploitation and expropriation–encroachment, defacement, demolition, destruction, devouring and pilfering–and the much-known drive–making profits and accumulating. It is a story of juxtaposition of two opposite sides with opposing interest, seemingly competing with each other. But, actually, it is not a competition between the two.

Rather, the second party, the exploiters and the expropriators, is in competition with the self between its components while the rest, the resisters, the regenerators and the like, is essentially opposed to the (1) acts harmful to the environment, ecology and nature, and (2) competition between the components of the second party. The competition is, to put it simply, for accumulation by the capitals involved in the exploitation and expropriation of human beings and the environment and nature. Capitalist exploitation and expropriation are the capital’s methods of reproduction and accumulation.

Capital cannot sit idly. To survive, it has to be in unceasing motion and expand. In areas of the environment, ecology and nature in an economy based on an exploitative system, capitals in motion exploit and expropriate labour and nature. Consequently, as the outcome of the motion, the exploitation, etc of the environment, ecology and nature come out and, in the exploitative system, the exploiters, a few in broader societies, gain while the exploited, multitudes, the people, suffer. The system not only fattens itself with unpaid labour of the working class, it also exploits/appropriates and expropriates nature, the environment and ecology. Moreover, it also maintains and nourishes the conditions for continuing with its acts of exploitation/appropriation and expropriation as the maintenance of the conditions is essential for its survival. With exploitation/appropriation and expropriation, the system produces commodities and it is part of the reproduction process as ‘[w]hen viewed […] as a connected whole, and in the constant flux of its incessant renewal, every social process of production is at the same time a process of reproduction.’ (Marx, Capital, Vol I, Progress Publishers, Moscow, 1977)

And ‘[c]apitalist production […] under its aspect of a continuous connected process, of a process of reproduction, produces not only commodities, not only surplus-value, but it also produces and reproduces the capitalist relation; on the one side the capitalist, on the other the wage-laborer.’ (ibid) In the case of Bangladesh’s environment, owners of private capital that exploits and expropriates environment, the nature is at one pole and the rest–the people, the sufferers due to the exploitation and expropriation–is at the opposite pole.

Whatever the exploiters, the expropriators exploit and expropriate from nature/ecology/environment metamorphoses into their capital, which strengthens their power to exploit and dominate and, in turn, the exploited, the people, owners of the commons/nature/ecology/environment, turn into the deprived, the destitute, the poor and the wretched. Thus, the capitals involved turn into producers of deprivation, destitution, poverty and wretchedness. The appropriation of surplus value, as part of the process, goes on simultaneously, and the generated surplus value is reconverted into capital, which is reinvested–the accumulation of capital, as ‘employing surplus-value as capital, reconverting it into capital, is called accumulation of capital.’ (ibid)

Whatever commodities are produced by capitalist exploitation and expropriation of labour and nature enter the market. This entire act/process encroaches on people’s life and people’s inalienable, fundamental and democratic rights. The market itself is incompatible with democracy. And if it is people’s democracy, not a ‘democracy’ of a few powerful, the market conclusively undermines people’s democratic rights, practices and space. Jacques Attali, neither a disciple of Lenin nor a follower of Mao, but the first head (1991–1993) of the European Bank for Reconstruction and Development, special adviser (from 1981 to 1991) to François Mitterrand, then president of France, and one of the leading intellectuals in the mainstream, sharply dissects market and democracy: ‘[T]hese [democracy and market economy] two sets of principles often contradict one another and are more likely to go head-to-head than hand in hand.’ (‘The crash of Western civilization: The limits of the market and democracy’, Foreign Policy, No 107, summer, 1997) Attali adds: “[T]he market economy and democracy […] are more likely to undermine than support one another.’ (ibid) Moreover, he admits: There is ‘inherent conflict between the market economy and democracy’. (ibid) No doubt, he is talking about the bourgeois democracy. If this is the state of bourgeois democracy with the ‘graceful’ touch of the market, then, the state and scope of people to initiate measures related to environment/ecology, environmental/ecological rights, participation in political process to determine issues concerning environment/ecology/biodiversity, democratic space to save/regenerate environment/ecology and the capitals slaughtering the environment and nature is easily perceived. It is a hostile reality with an antagonistic relation. “The social relation of capital […] is a contradictory one. These contradictions, though stemming from capitalism’s internal laws of motion, extend out to phenomena that are usually conceived as external to the system, threatening the integrity of the entire biosphere and everything within it as a result of capital’s relentless expansion.’ (John Bellamy Foster, ‘Capitalism and Ecology: The Nature of the Contradiction’, Monthly Review, Vol 54, Issue 4, September 2002) The Bangladesh environment is not free from this reality —the social relation of capital.

Capitals that exploit and expropriate labour and nature and hurt the environment include finance capital, capital from international lenders. In addition, there is no reason to look at capitals’ anti-environment acts in different areas in an isolated, compartmentalised way–one capital isolated from another, one devastating act isolated from another, one area isolated from another. That, the isolated/compartmentalised approach, is an erroneous and novice way of looking at the process spanning society and economy, life of people, the environment and ecology as, in the case of environment and ecology, all are connected to all. The first and second informal laws of ecology, which Barry Commoner and others refer to, are (1) everything is connected to everything else and (2) everything must go somewhere. These two tell the interconnections in ecology. (Cited in John Bellamy Foster, The Vulnerable Planet, A short economic history of the environment, Monthly Review Press, New York, 1994) The interconnection turns stronger, deeper and wider while capitals continue interacting with and exploiting, actually decimating, nature. It enfolds food, health, habitat and legislation, its execution/non-execution, political power, allocation of funds, scientific activities/research, greater society, etc. Labour is obviously there.

With all these, the question of class power and class equation cannot go absent. A part of a capital is busy with food and its processing while another part of the same capital expands in the areas of health care or manufacturing or habitat and another part is in the services sector or agriculture or chemicals processing and thus goes the game. These all have implications for the environment, ecology and nature, which mean implications on people’s life and rights and, in short, on all these capitals exploit–labour and nature.

Therefore, a few lines of contradictions appear explicitly while a few remain implicit. The contradictions make further developments. Most of the environment initiatives refuse or fail to look at these contradictions and their sources. For some of these initiatives, this refusal or failing is reneging interests of people/environment and ecology; and for some, it is ‘idleness’–unwillingness to labour for searching (1) thoroughly and deeply and (2) the source of the problem/phenomena. A caustic tongue may characterise this practice as ignorance instead of idleness.

But, in this century, writes Curtis White, the battle against the expropriation of the earth must unite with the fight against the expropriation of human beings, ultimately challenging the dialectic of expropriation and exploitation and the entire ‘barbaric heart’ of capital. (The Barbaric Heart, cited in John Bellamy Foster, ‘Marx, value and nature’, Monthly Review, Vol 70, Issue 3, July-August, 2018) The engagement for the environment in Bangladesh is no different: the fights against exploitation and expropriation of earth and human beings should unite with a broader alliance as the two are basically a single issue–humanity.

Any absence of this unity is not lack of rationale for the unity, but lacking in (1) articulating the rationale, (2) initiating unity and (3) giving up the required initiative to those who are unwilling to walk along the united path–engage for the environment, engage against capitals killing our earth, slaughtering our environment and exploiting human beings and nature. Consequently, flamboyant environment ‘crusaders’ rage, but miss one of the basic issues related to environment–capitals’ crushing character–and abstain from the essential task.