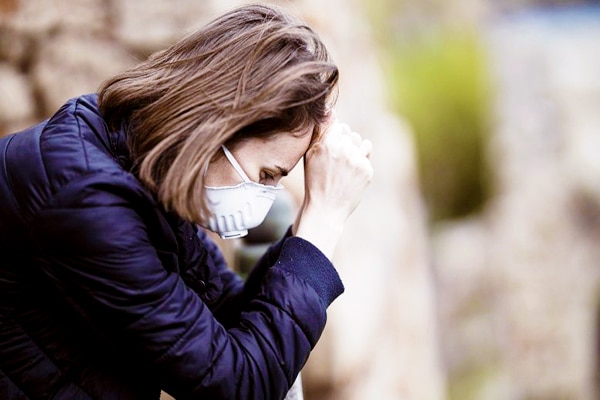 On October 15, thousands of workers in the health and social care sectors staged mass demonstrations in Paris and throughout France. The day of action was called by the Confédération Générale du Travail (CGT), the country’s most militant trade union grouping, together with other unions and collectives.

Across France, doctors, nurses, social care professionals and medical workers who for months have stood at the frontline of the battle against the COVID-19 pandemic took their frustration and fury out onto the streets.

In Paris, protesting medical staff marched from the Place Vauban to the Health Ministry, their banners and placards conveying the enormity of the crisis and their fury at the all-round governmental failure to address it. “It’s not medals or tears we want, it’s BEDS!” read one placard. “Health is non-negotiable–money NOW for public hospitals!” read another.

Adding to protestors’ rage was the new anti-pandemic ‘action plan’ announced by French President Emmanuel Macron in a nationally televised interview the previous evening. Macron’s latest light bulb inspiration was to clamp down night-time curfews on Paris and eight other big cities. According to the curfew rules, which came into effect on October 17, nobody would be allowed outside between the hours of 9 pm and 6 am, on pain of being levied a fine of 135 Euros.

Somehow, amid all the wartime language, Macron neglected to announce any additional help for a national health sector edging towards collapse.

In Toulouse, Grégory, an operating room nurse, was seething.

The government’s approach? A bit more repression, a bit less freedom, but ALWAYS nothing for hospitals.

“We go to work with fear in our stomachs,” said Blandine, a social care worker with Assistance publique- Hôpitaux de Paris (AP-HP), the university hospital trust operating in the capital and its surrounding areas. The largest hospital system in Europe, it provides health care, teaching, research, education, preventative medicine and emergency medical services across 52 branches of medicine. Yet even this ‘crown jewel’ of the French public sector medical system is teetering on the brink.

“All the time we’re being asked to take on more duties, our holidays are being cancelled despite the fact we’re exhausted–and Emmanuel Macron dares speak of a ‘lack of organisation’”, continued Blandine, referring to comments made by the president during a visit to a Paris hospital the previous week. While making the customary media-hyped tour, Macron had told a care worker that if hospitals were currently under pressure, this was because of a lack of organisation rather than lack of funding.

For Blandine and her co-workers at the Hôpital Pitié-Salpêtrière in the 13th district of Paris, this was nothing short of an insult. “In actual fact, for those of us working in France’s top hospital, there’s a shortage of soap, of disposable gowns–we don’t even have disposable covers for our digital thermometers, meaning we can’t check our patients’ temperature,” added Emmanuelle, a nurse who has worked at the flagship hospital for the past 10 years.

Every dimension of the French hospital sector appears enmeshed in crisis: not enough personnel on the ground; thousands of new trainees lost each year because of impossibly stressful working conditions; lack of basic equipment, including PPE; staff at the end of their tether denied rest days or on non-stop call. In retirement homes, too, workers describe the situation as desperate.

All is set to get very much worse as a second wave of Coronavirus, more potent and fast-moving than its predecessor, surges through the country. Between September 15 and October 13, 362,000 new cases of COVID-19 were reported in France; the graph continues its rocket-like ascent.

The second wave: paralysis on the medical front, repression as default

The following figures provide a snapshot view of Covid-stricken France in mid-October 2020:

Meanwhile, winter and the annual flu season are approaching fast.

At the end of September, a warning about the direction and speed of travel was set out in unambiguous terms by one of France’s foremost medical figures. In an interview with the weekly Journal du Dimanche on September 27, Patrick Bouet, head of the National Council of the Order of Doctors, had some scathing comments on the government’s response.

“Not nearly enough is being done… If nothing changes, France will face a widespread outbreak across its whole territory, for several long autumn and winter months,” Bouet said, adding that as no medical staff would be available to provide reinforcements, France’s health system would be unable to meet all the demands placed on it.

Bouet’s grim predictions are currently unfolding before our eyes. But Macron continues to fiddle away, playing wartime leader with his tough talk and night-time curfews while keeping schools open, insisting on ‘business as usual’–and doing nothing to address the accelerating health emergency.

“We’re paralyzing the country because there isn’t enough room in our hospitals,” notes Patrick Pelloux, president of the Emergency Doctors Association of France and a particularly respected figure in France for being the first to flag up the heatwave health emergency of August 2003, in which thousands of mainly elderly people died.

And we’re paralyzing hospitals because we lack beds. I regret that Macron didn’t call for reinforcements, by asking the 60,000 health workers who have left hospitals to come back and help reduce the pressure. He didn’t respond to the priority which is adding more beds…

They’re trying to slow the epidemic down. But this curfew–and I don’t understand this war-like language–will not stop the epidemic. We’re in the same mentality as we were last spring.