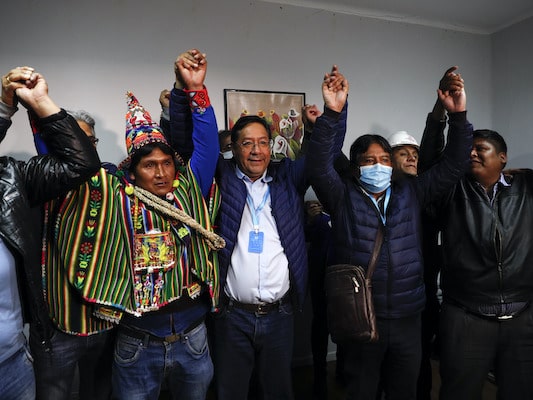 The results in Bolivia are overwhelming: the Movement Towards Socialism (MAS) duo, led by Luis Arce and David Choquehuanca, won with 52.4 percent of the vote, according to the Ciesmori company, and 53 according to Jubilee. In second place is Carlos Mesa with 31.5 percent in the first case and 30.8 percent in the second. Third, with 14.1 percent of the votes, is Fernando Camacho.

Although the official results of the Supreme Electoral Tribunal are still missing, the trend is irreversible, to the extent that the different sectors of the right have recognized the victory. At the national level, it was first Jeanine Añez, then Jorge Quiroga, and Mesa. In the international arena, the Secretary of the Organization of American States (OAS), Luis Almagro.

No pollster had foreseen a difference of that magnitude. One of the reasons is the hidden vote factor, from those who did not reveal who they would be voting for. Although this is an ever-present variable, its importance assumed a central component in a context of threats, persecution, and intimidation that began at the zero hour of the coup d’état and continued until the time of the vote.

In the preceding hours, some correspondents in La Paz described how several people would not speak in front of the camera out of fear, something that had been previously documented. The de facto government issued threats through the media, as well as with police and military since Saturday and during Election Day. The climate established by spokespersons for the regime was one of confrontation, firearms, arrests, and upheaval.

However, the participation was massive and it demonstrated that the MAS forces had a great capacity to reorganize themselves in order to achieve a presidential formula, with unity among the indigenous, peasant, union and territorial movements, and with the support of sectors that had distanced themselves, such as the Aymara leader Felipe Quispe. A cohesive element was the need to electorally defeat the de facto government, identified with the right wing and the return of exclusion.

The re-articulation of the MAS demonstrated the strength of the historic movement that built the process of change that gave victory to Evo Morales and Alvaro Garcia Linera in 2005 with 53.7 percent of the vote, a figure similar to what the results indicate at present. Once again, then, the humble sectors of Bolivia, from the countryside, the mines, the peripheries, part of the middle classes, achieved an electoral victory in conditions of great adversity.

The MAS managed to win, according to the results of Ciesmori, in a majority of departments, with very high numbers in some cases: La Paz with 65.3 percent, Cochabamba 63.1, Oruro 62.4, Potosí 51.5, and Pando 45.8. Mesa, on the other hand, achieved the highest numbers in Chuquisaca, Tarija, and Beni. Camacho won in Santa Cruz.

The reason for this victory is also due to the errors of the de facto government that accumulated over the months: a fall of the economy in a global framework of recession after a growth of around 4.5 annually during six years; a mishandling of the pandemic, corruption scandals such as the purchase of respirators at a premium. The postponement of the elections on three occasions played into the hands of the de facto government and the right wing, and allowed for a clearer assessment of what the MAS had accomplished in its years of government.

The unity of the historic MAS bloc faced in turn a disunited and confrontational right wing. The withdrawal of Añez and Quiroga’s candidacies at the last minute, both with little approval, was not followed by that of Camacho, as some speculated, who remained at the head of his campaign knowing that he had no chance of reaching a second round and thus gave MAS more chances of victory in the first round because of the dispersion of votes. In view of the results, it is clear that if the Santa Cruz leader had given up, the MAS victory would have been the same.

It is still too early to say what the paths of the different actors of the coup will be. Murillo, who had been censured by the Plurinational Legislative Assembly in recent days, was dismissed from the de facto government. Mesa, again defeated, affirmed that he will be “head of the opposition,” although it is not clear how he will be able to organize it. As for Camacho, it is probable that he will try to consolidate a leadership in the East, supported by international forces.

Evo Morales, in a press conference from Buenos Aires, affirmed that they will seek a reconciliation meeting for the reconstruction: “we are not vengeful, revanchists”, he affirmed. How will peace be articulated with justice? Yesterday, in an act of great symbolism, Patricia Arce, mayor of Vinta who had been kidnapped, beaten and painted red during the days of the coup, was elected senator by the MAS.

The other pivotal issue will be that of the economy. Arce, who was Minister of Economy from 2006 to 2017, and from January 2019 until the coup, and thus the central architect of growth, has announced that one of the first steps will be to provide the anti-hunger bonus and strengthen domestic demand. Arce will be, together with Choquehuanca, the new head of government, in what will also be a renewal within MAS, a change that poses challenges and great opportunities.

There are still days of uncertainty until the new government is in office. What happened in Bolivia can be described as a counter-coup, in the face of a coup with strong international support that had not arrived to remain only one year in political power. This was a historic victory, and a clear demonstration of García Linera’s words: “fight, win, fall, get up, fight, win, fall, get up. Until the end of life, that is our destiny”.