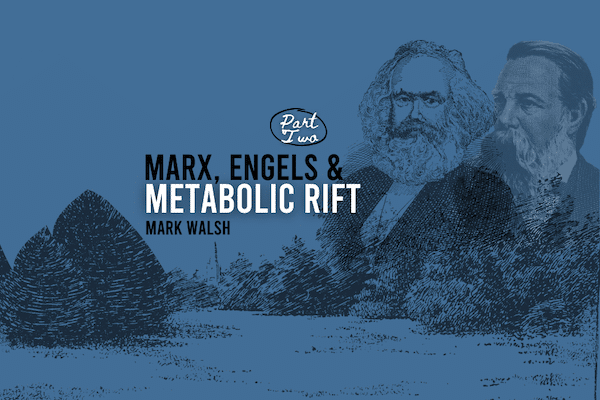 Following Part One, Mark Walsh now explores the impact of the metabolic rift over the 20th century, including how the drive of capitalist forms of agriculture and primary industry have led to species extinction, ecological collapse and the increased outbreaks of deadly epidemics.

The development in 1909, by the German chemists Fritz Haber and Carl Bosch of a technique for taking Nitrogen out of the atmosphere to produce ammonia (NH3) allowed for the production of synthetic fertilisers (and explosives) on an industrial scale. While leading to an enormous increase in food production, this did not actually heal the metabolic rift in the natural soil fertility cycle. It simply hid it while in fact destabilizing other natural processes.

The excessive use of nitrogen fertiliser actually further reduces the soil’s fertility leading to a vicious cycle of ever-increasing need. This problem of over-fertilisation to maximise crop yield is a very serious one, leading to all manner of environmental problems: destruction of river, lake and coastal habitats, fish kills, global warming and ozone depletion. Nitrogen compounds such as ammonia and methane, arising from industrial agriculture, are key components in the photochemical smogs which plague cities like Paris and Los Angeles.

Food as a Commodity

Modern agribusiness and its commodification of food production has replicated on a global scale the kinds of local metabolic disruption Marx observed in Ireland in the 19th century. Over recent decades, pressure from institutions like the IMF and World Bank forced countries of the global south to prioritise cash crops such as coffee or flowers, destroying self-sufficiency and leading to soil degradation since such crops were often ill-suited to the local environment.

The removal of trade barriers forced local farmers out of business and into ever-expanding city slums. Remaining farmers are burdened with the increasing costs of synthetic fertilisers and pesticides as they are forced to eke out an existence on ever more marginal land. The imposition of such free-trade policies has even led to some utterly bizarre scenarios such as Mexico, the home of corn domestication, becoming a net importer of U.S. corn.

Capitalist agriculture leads to disjointed zones of homogeneity: vast landscapes of monocultures such as palm oil plantations or giant barns of almost genetically identical animals. These zones are artificially separated from each other and the natural cycles under which their organisms evolved. This has all manner of negative consequences not least of which is the horrendous cruelty to the animals.

One consequence is particularly noteworthy: the selection of ever more virulent pathogens. While deadly viruses exist in nature, their spread is often contained by various natural buffers. For example, in order for a virus to be transmitted its host must survive sufficiently long to interact with a similar organism, one which is susceptible to infection. Provided the natural environment is sufficiently diverse, such interactions may be relatively infrequent thus selecting for more benign pathogens; the really deadly ones will kill their hosts long before the opportunity for transfer.

In the artificial environment of a factory farm, where thousands of genetically similar organisms (selected to fit a set of narrow profit optimizing criteria) are crammed together, the most lethal pathogens can spread with ease. As the evolutionary biologist Rob Wallace points out: capitalist food production creates conditions which select for the most virulent pathogens.

In his 2016 book, Big Farms Make Big Flu, Wallace makes a very convincing case that various swine and avian viruses as well as Zika and Ebola, have to a significant extent been aided and abetted by the global agribusiness. It is as yet a little early to say to what extent COVID-19 fits into Wallace’s thesis although there is no doubt that capitalist methods of workplace organization (especially meatpacking) and the underfunding of vital public services such as healthcare have greatly aided the spread and lethality of this particular pathogen.

It is one thing to acknowledge that human activity has led to a dangerous destabilisation of vital natural processes. This, at least at the local level, was clear to Leibig. It is also clear to essentially all of the scientific community today. Marx’s contribution to this story was to connect this disruption not simply with human activity but to the way capitalism organizes this activity.

Marx saw capitalism not as some natural culmination of human development but as simply its latest phase. This system, whose emergence was connected with revolutionary scientific and technological discoveries, was more dynamic than any that had passed before. It was also more unstable and filled with contradictions. As Marx noted:

On the one hand, there have started into life industrial and scientific forces, which no epoch of former human history had ever suspected. On the other, there exist symptoms of decay far surpassing the horrors recorded of the latter times of the Roman Empire…

Despite its immense productive capabilities and the tremendous impetus to scientific and cultural development, capitalism has led to poverty, war and environmental destruction on an extraordinary scale. Famine and want co-exists with abundance. Technological breakthroughs are not a source of mutual celebration but a threat to livelihoods. Marx’s goal was to make sense of these contradictions, to understand how such a system emerged and what was driving it.

In his analysis, Marx pointed out certain salient features of capitalism. While production involves the combined efforts of workers all over the world, those workers have little or no say in what they produce or how it is used. Instead production is directed by private interests in a relentless competition for profits. To survive, individual capitalist firms strive to produce as efficiently as possible, seeking new technologies, new products and new markets. Outgrowing one’s competitors is paramount. Thus, the system expands, disrupts, extracts and exploits, endlessly commodifying every aspect of our lives.

As Marx and Engels so memorably wrote:

Constant revolutionising of production, uninterrupted disturbance of all social conditions, everlasting uncertainty and agitation distinguish the capitalist epoch from all earlier ones. All fixed fast frozen relations, with their train of ancient and venerable prejudices and opinions, are swept away, all new-formed ones become antiquated before they can ossify. All that is solid melts into air, all that is holy is profaned.

In understanding the ecological consequences of this, two points here are crucial. The first concerns planning. The intensity of capitalist competition means that the system operates on short term cycles. Firms that cannot maintain profitability go under. Thus, any potential for long term planning is severely constrained amid pressure for ever speedier returns on investment. Worse, the oft-devastating environmental implications of short-term profiteering are of little interest to those reaping the rewards. Writes Engels:

What cared the Spanish planters in Cuba who burned down forests on the slopes of mountains and obtained from the ashes sufficient fertiliser for one generation of highly profitable coffee trees – what cared they that the heavy tropical rainfall washed away the unprotected stratum of the soil, leaving behind only bare rock!

Moreover, there is continual pressure for these cycles to speed up. Thus, while in 1925 it took about 4 months to raise a 1-kilogram chicken, today with selective breeding, hormones and chemical feed a 2-kilogram bird can be raised in 6 weeks. This tendency puts an ever-increasing strain on established metabolic cycles driving further rifts as nature’s timelines and capital’s timelines increasingly diverge.

The second point is growth. While the need for a planned, efficient, free public transport system is blindingly obvious, manufacturers of automobiles continue to produce and push ever more and ever larger vehicles. To increase sales, all manner of products, especially electronic devices, are constructed to have ever shorter life spans: so-called “in-built obsolescence”. We are drowning in stuff. The most common type of marine debris found in our ocean is now plastic.

Yet the need for further growth is advocated ad nauseam by our political and business leaders, by economists and pundits. It is tempting to think of this simply as a collective insanity, a sort of religious fundamentalism that has captured the minds of our leaders resulting in a society of reckless accumulation.

However, this argument has it backwards. The drive toward unbounded economic expansion is an intrinsic feature of capitalism. As the Marxist scholar Ian Angus puts it:

Capital exploits labour and nature to produce goods that can be sold at more than the cost of production, in order to accumulate more capital, and the process repeats. Growth ideology does not cause perpetual accumulation–it justifies it.

The disruptive effects of human activity on nature are of course not unique to capitalism. For example, the clear cutting of forests by ancient farmers to make cultivable land had often profound consequences on local eco-systems. As Engels writes:

When the Italians of the Alps used up the pine forests of the southern slopes, so carefully cherished on the northern slopes, they had no inkling that by doing so they were depriving their mountain springs of water for the greater part of the year, making possible for them to pour still more furious torrents on the plains during the rainy season…

Under capitalism however, the scale and pace of this disruption is at a level that far surpasses anything our ancestors were capable of. It happens despite the fact that we have a deeper understanding of the laws of nature and the consequences of our actions than at any previous time. Worse, it happens amid a host of cleaner alternatives.

Capitalism locks us into rationales and cycles of its own. These capitalist cycles of extraction and production may come to feel natural or inevitable. Marx realised they are anything but. Most of humanity is disconnected from these processes or at least from controlling them. Even those with power are subservient to the demands of the system, locked in a competitive spiral of incessant production for productions sake.

This alienation can lead to naive explanations: that the problem is too many people or an inevitable consequence of scientific and technological development. Some may conclude that the solution involves a return to purely “organic” techniques and a rejection of modern methods. But this is to throw the proverbial baby out along with the bathwater.

Over the centuries, humanity has by hard graft and incremental progress amassed a wealth of scientific wisdom. This is not our enemy, nor is our productive capability. What we lack is the control of our own interaction with nature and our ability to rationally and justly determine how this interaction can best enhance human existence. In this spirit Marx wrote that:

Freedom, in this sphere…can consist only in this, that socialized man, the associated producers, govern the human metabolism with nature in a rational way, bringing it under their own collective control rather than being dominated by it as a blind power; accomplishing it with the least expenditure of energy and in conditions most worthy and appropriate for their human nature.

Our species faces a colossal ecological challenge. Survival depends on forming the greatest mass movement that has ever existed to radically reconfigure our political and economic structures. With each day that passes, ever-growing rifts with our natural environment make the task of rebuilding more difficult.

To succeed, our struggle must be guided by an appreciation for the best of human imagination and ingenuity in all its various forms: the sciences, arts and humanities, the realms of technology and economics and the day to day experience and wisdom of those countless millions on whose labour we all rely. The work of Marx and Engels, its scope, diversity and revolutionary insight, epitomises the acme of that spirit.

Mark Walsh is an author at Rebel