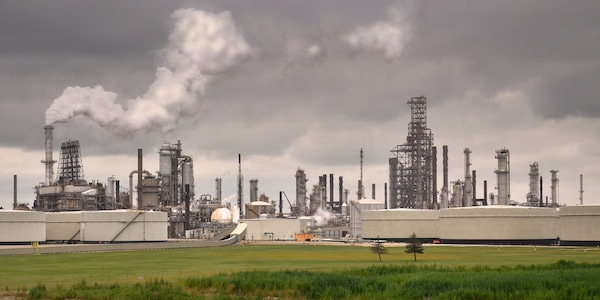 The harm caused by the climate crisis has become undeniable–and terrifying. The floods, storms and raging fires, and the death and displacement they bring, have contributed to a global upwelling of concern and demands on governments to take action. But this has led to new behaviour by the fossil fuels lobby that will undermine efforts to prevent catastrophic climate breakdown if not rigorously challenged.

When people experience the frightening reality of a warming world, they are resistant to Big Oil’s previous tactics of denying that climate change is happening or pretending its impacts will be negligible. But rather than shift their huge investment power to renewable energy and take the financial hit from admitting that the vast majority of fossil fuel reserves are unburnable, companies such as Shell and BP have adopted a different approach: greenwashing. In efforts to continue with business-as-usual operations and keep on drilling and mining, fossil fuel companies are ramping up their use of public relations to paint a green veneer over their destructive practices. They try to portray themselves as caring, responsible corporate citizens, while continuing to mine, drill, burn and spill.

If someone is making money from oil, coal or gas but tries to persuade us that they are on our side on the climate crisis, and they’ve got a way to tackle it without stopping burning fossil fuels–that is greenwash. From fossil fuels industry get-togethers to oil company reports, the industry is ramping up its rhetoric about being part of the solution. ‘International Petroleum Week’ earlier this year portrayed itself as ‘Delivering a low-carbon future’, while the ‘Oil and Money’ conference in 2019 claimed to offer ‘Strategies for the energy transition’.

Of course, if the oil industry was putting its huge resources into the transition away from high-carbon energy that would be welcome, but that’s not what’s happening. While oil majors demand credit for plans to rein in some of their more grotesquely polluting and carbon intensive practices, such as failing to deal with methane leaks, they refuse to take the essential steps of stopping exploration for new reserves of fossil fuels and rapidly ending extraction.

Shell, whose 2019 annual report was unashamedly titled ‘Energy for a better future’, proposes to reduce emissions from its products by just 65 per cent by 2050, while BP, despite all the publicity around its support for net-zero by 2050, will commit to only a 50 per cent reduction. The reason Big Oil expects its emissions to remain so high, of course, is that it has no plans to stop selling fossil fuels and is instead leveraging net-zero targets as a smokescreen. It hopes to retain its social licence by paying lip service to tackling climate change, while continuing to profit from causing the crisis.

Another key tactic is to try to persuade regulators and the public that continued fossil fuel burning is acceptable due to technological advancements that can remove emissions from the atmosphere, whether via carbon capture and storage (CCS) or using ‘negative emissions technologies’ such as direct air capture. However, capturing CO2 from the air is hugely expensive and unproven at scale. Using CCS on fossil fuels, especially given the availability of cleaner, cheaper alternatives, doesn’t make sense on climate or economic grounds.

As clean, renewable energy sources plummet in price, and the impacts of climate change escalate, it’s clear that fossil fuels’ days are numbered. Greenwashing can’t change this, but it can buy more time for profiteering by Big Oil. By claiming to be part of the solution, fossil fuel companies hope both to delay the stringent emissions limits that would send their value crashing down and dodge the public anger that is rightly directed at them for decades of deceit and delay.

By co-opting the language of climate action to provide a smokescreen for continuing fossil-fuelled profits, the industry hopes to create confusion about what climate-friendly policies actually look like, which it can use to delay decarbonisation. But Big Oil’s strategy to protect profits is costing the lives of people and the safety of communities on the frontlines of the climate crisis

Not falling for the spin

Fossil fuel companies are wealthy and hold political power via well resourced lobbying networks, but they also depend on their social licence to operate. It’s no coincidence that their splurging on greenwash in recent years follows a huge surge in climate activism and new climate commitments from governments.

But the climate movement isn’t falling for the spin, with escalating protests at oil industry events and oil-sponsored spaces. This has led to cultural institutions, including the Royal Shakespeare Company and National Galleries Scotland, cutting sponsorship ties with BP. There has also been a crucial pushback against misleading advertising in which oil majors imply that they are renewables companies, with BP forced to pull an ad campaign following a legal complaint by activist lawyers Client Earth. It’s also important to show public support for the clean, cheap renewable energy sources that are already up and running, and which disprove the claims from Big Oil that we can’t manage without their polluting products.

But most of all, we need to remember what the industry’s greenwash attempts to hide: its business causes a huge burden of human suffering, which falls most heavily on those who are already disadvantaged. Cleaner, cheaper alternatives are not only already available but rapidly dropping in price. With the world waking up to the urgent need for climate action, and fossil fuels unable to compete on safety, efficiency or cost, greenwashing is the only sales strategy left.

Alethea Warrington is a campaigner with the climate action charity Possible