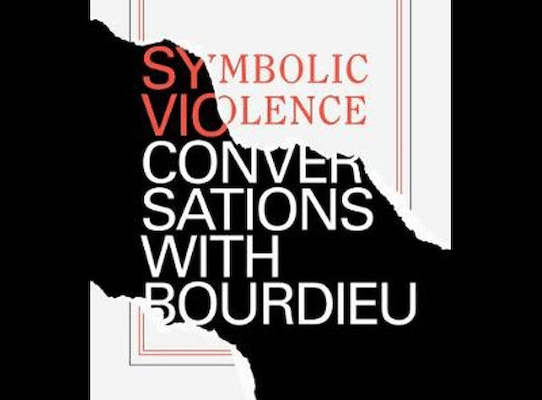 Michael Burawoy’s Symbolic Violence is a Marxist critique of the sociology of Pierre Bourdieu. This fascinating book explores some of Bourdieu’s contradictions by staging a series of ‘conversations’ between the French sociologist and a range of important, mostly Marxist, thinkers whose writings Bourdieu ignored or dismissed in footnotes, even though he ought to have engaged explicitly with their ideas. Each chapter in the book presents such a ‘conversation.’ Because there never was any overt dialogue between Bourdieu and these thinkers, the conversations are in fact Burawoy’s (quite illuminating) comparisons between the respective views of Bourdieu and Talcott Parsons, Karl Marx, Antonio Gramsci, Frantz Fanon, Paulo Freire, Simone de Beauvoir, C. Wright Mills and Burawoy himself. In the last ‘conversation,’ Burawoy confronts Bourdieu with Bourdieu.

Pierre Bourdieu (1930-2002) was a hugely influential sociologist. In addition to writing dozens of books and many journal articles, he founded and edited one of the leading French-language sociology journals, Actes de la recherche en sciences sociales. He reached the pinnacle of academic success in France in being appointed a full professor at the Collège de France in 1981. His book La distinction was deemed one of the ten most important sociological works of the twentieth century by the International Sociological Association. According to Google Scholar, the English translation of La distinction has been cited over sixty thousand times, an extraordinary figure. In many ways the last in a tradition of great French intellectuals (e.g. Sartre, Barthes, Foucault), Bourdieu originally studied philosophy, before moving to ethnography, and eventually embracing sociology. He brought within the compass of his grand theory objects as diverse as politics, television, literature, photography, art, schools and education, marriage rituals, gifts and giving, etc.–as well as mastering the relevant scholarly disciplines of philosophy, anthropology, sociology, literary studies, women’s studies and others. His work has been influential worldwide.

[Bourdieu’s] sentences are long, his paragraphs riddles, his essays perplexing, his knowledge intimidating, his books exhausting, and his oeuvre sprawling. When I thought I understood, I wondered what was novel. Struggling with his texts, I experienced the full force of symbolic violence. Pierre Bourdieu is not only the great analyst of symbolic violence but he is also the great perpetrator of symbolic violence cowing us into believing that some great truth is hidden in his work. For many years I was anti-Bourdieu. (1)

Notwithstanding Bourdieu’s symbolic violence, Burawoy relates how he became ‘hooked’ on Bourdieu and no longer holds such a negative view of him, although he remains very critical.

In the prologue of Symbolic Violence, Burawoy explains that his ‘encounter’ with Bourdieu unfolded in three stages: skepticism, conversion and engagement. Having initially dismissed Bourdieu as arrogant and unoriginal, but pressed by his students to teach Bourdieu’s sociology, Burawoy relates how he took part in a Bourdieu ‘boot camp’, a seminar given by his Berkeley colleague (and Bourdieu’s former student), Loïc Wacquant, during which Burawoy first addressed Bourdieu’s relation to Marxism, gained a mastery of Bourdieu’s writings and ideas, and came to have a high regard for them. In particular he found that Bourdieu’s work, when taken as a whole, addressed many questions with which he himself had been grappling for a decade. In particular, he identified in Bourdieu’s work a key concept, symbolic violence, that converged with his own ‘interpretation of social structure as a game whose uncertainty secures participation while simultaneously obscuring the conditions and consequences of its reproduction’ (8). This was the moment of ‘conversion’. The ‘conversations’ and critical reflection on Bourdieu’s career constitute Burawoy’s moment of ‘engagement’.

Burawoy argues that Bourdieu’s trajectory displays three fundamental paradoxes: ‘how he condemns symbolic violence but defends the very institutions that reproduce that domination; how he advocates reflexivity by locating intellectuals within their fields of production but fails to do the same for himself; and finally, how he is critical of public engagement and yet this becomes so central to his own identity.’ (30) As Burawoy notes, Bourdieu’s sociology teaches that such contradictions are to be expected: there is always a gap between theory and practice. Bourdieu theorizes the academic world as a field of power in which individuals compete to accumulate symbolic capital and strive for hegemony, while imagining themselves to be seeking to advance knowledge in a disinterested way.

Chapter two pits Marx against Bourdieu. Burawoy’s argument is that Marx does not have much of a theory of superstructures, while Bourdieu’s entire output concerns the latter, conceived as fields of power and competition between individuals striving to accumulate cultural capital in various forms at each other’s expense. On the other hand, Bourdieu had no theory of capitalism, of how fields develop or of the relations between fields (43). Burawoy contends that Marx’s theory of superstructures was developed by many of his successors (he specifically names Korsch, Lukács, the Frankfurt School and Gramsci, although there have been other significant figures), but that Bourdieu simply ignored the development of Marxism since Marx.

Believing the masses to be incapable of understanding their own social position, and seeing all change as originating in the dominant class, Bourdieu thought that Marx had failed to understand how a class or similar entity only exists inasmuch as there are people who speak in its name and are recognized by others (who thereby become members of the class) as being entitled to do so. Burawoy points out that Bourdieu rejected the idea of class struggle, instead seeing all struggles as classification struggles, i.e. competition among individuals to gain the most advantageous positions within cultural fields. Ultimately, Burawoy claims that if Marx lacked insight into the cultural reasons for which working class struggles did not develop beyond a certain point, Bourdieu’s theory makes historical change unthinkable. There was no place in his theory for a genuine political economy, only for the study of various fields, the origin and future development of which remained unexamined:

Bourdieu has no notion of civil society. What we find instead are leaders of the organizations of civil society […] competing with one another in the field of power above civil society, employing their representative function to advance their own interests, more or less unaccountable to their followers (67).

In chapter three, Burawoy contrasts Bourdieu’s ideas with those of Gramsci. Bourdieu wrote that people discover in Gramsci ‘a great number of things that I was able to find in his work only because I hadn’t read him’ (59). Yet Burawoy claims that Gramsci is the Marxist whom Bourdieu should especially have taken seriously, because of the parallels between Gramsci’s concept of hegemony and Bourdieu’s notion of symbolic violence, but that ‘Gramsci was simply too close for comfort’. Because ‘the parallels are remarkable […] one can only surmise’ that Bourdieu deliberately ignored him (60).

According to Burawoy, the key comparison and opposition between Gramsci and Bourdieu pits the latter’s notion of symbolic violence against the former’s concept of hegemony. For Gramsci, the common sense of the working class, rooted in its practical activity, contained an element of ‘good sense’ that could blossom into class consciousness; for Bourdieu, that common sense was simply ‘bad sense’: workers’ practice led them ‘to accept the social world as it is, to take it for granted, rather than to rebel against it’ (71). Bourdieu stressed the symbolic violence inflicted by schooling, which ‘secures the active participation of students and teachers in the pursuit of credentials […] while obscuring the reproduction of class domination that is the effect of such participation’ (97). Burawoy points out that Gramsci also wrote about the role of schooling in reproducing the deeply anchored dispositions (which Bourdieu called habitus) that cement class identities. However, Gramsci believed in the potentially transformative role of education and especially in the revolutionary activity of the working class.

Chapter eight explores the convergences and divergences of Burawoy’s and Bourdieu’s analyses of the ‘truth of labour’. Burawoy points out that Bourdieu saw the acceptance of exploitation by workers as a matter of misrecognition rooted in their habitus, whereas Burawoy regards it as the product of mystification:

Symbolic violence through misrecognition rests on the bodily inculcation of social structure and the formation of a deep, unconscious habitus. There is no need for any concept of hegemony, because we are programmed to act out the social structure. Mystification […] rests on individuals being inserted into specific social relations […] and is the necessary condition for a stable hegemony. (163)

Burawoy argues that people consent to domination because of mystification, which is ‘rooted in the social relations into which men and women enter, [but] operates on all individuals, independent of their inherited dispositions’ (162-163). Bourdieu’s idea of misrecognition is rooted deeply in individuals’ habitus–which Burawoy describes as a tautological, unscientific notion (‘a folk concept with a fancy name’) that masks the absence of a theory of social change in Bourdieu’s sociology (170).

[In reducing Beauvoir’s ideas to Sartre’s], Bourdieu thereby exercises the very symbolic violence he condemns, namely the masculinist practice of silencing women. The final move in this denigration is to appropriate as his own Beauvoir’s ideas from The Second Sex–a foundational classic in the analysis of masculine domination as an expression of symbolic violence. Bourdieu’s Masculine Domination is but a superficial and diminutive gloss on The Second Sex. Reductionism, silencing, and appropriation are three stages in the labour of producing one’s own distinction through the conquest and erasure of others. (111)

Along with Bourdieu’s elitist practice of often writing in a forbidding style and jargon, his treatment of Simone de Beauvoir illustrates Burawoy’s contention that by failing to adopt a reflexive stance in his work and by perpetuating the institutional practices of the academic world, Bourdieu reproduced the relations of domination he himself theorized.

In chapter nine, Burawoy compares Bourdieu’s position in his book, The Weight of the World, with the theory (expounded in his major works) that ordinary people are not able to comprehend their oppression and revolt against it, because they are in effect programmed to submit to symbolic violence and accept their lot. In The Weight of the World (La misère du monde), Bourdieu and his collaborators reproduced long oral testimony from people of all walks of life, in which these people spoke of the oppression to which they were subject and the struggles in which they were involved. It is clear that these people were not unable to comprehend the relations of domination under which they lived and could thus resist them.

Burawoy also evokes Bourdieu’s own very public opposition to neoliberal policies in France and his political alignment with popular forces opposing the French state. Here is another paradox: in many of his books, Bourdieu criticized those, such as Marxists, who would fight against the established order; he regarded them as enacting symbolic violence themselves, by deluding themselves and others that they were allies or spokespersons of popular movements, although (he claimed) they were in reality dominating them. Yet, in The Weight of the World, as well as in other writings and in his own political activism, Bourdieu acted as an ally of popular movements.

Symbolic Violence is a rich and enlightening Marxist critique of Bourdieu’s sociology, which highlights both the latter’s profound insights and its shortcomings. The ‘conversations’ between Bourdieu, Marx, Gramsci et al. illuminate the limits of Bourdieu’s theory, but also its lessons for Marxists.