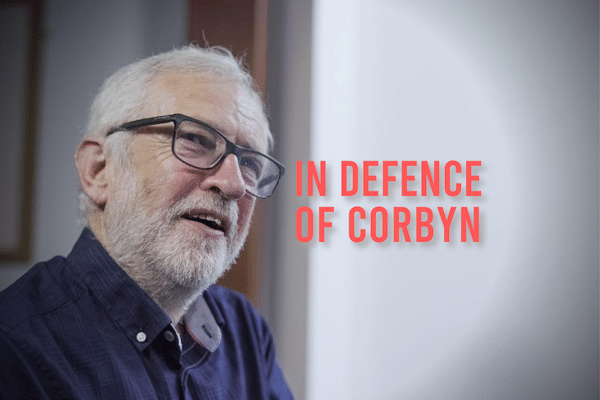 The reason? On paper it was because of his response to the EHRC report on antisemitism in Labour.

While continuing his consistent condemnation of antisemitism, Corbyn’s statement highlighted those parts of the report which showed his team improved the party’s response, despite obstruction from an internal “party bureaucracy” hostile to him. He also pointed out how the scale of the problem was overstated for political reasons “by our opponents inside and outside the party, as well as by much of the media”. He called for the full implementation of the report’s recommendations.

But this response wasn’t the real reason for his suspension.

His true offence was one he first perpetrated decades ago: being a radical, a socialist, an anti-imperialist. Since he had the gall to be (half-accidentally) elected as Labour leader in 2015 there has been a non-stop effort to tear him and those that support his left-wing ideas down.

Starmer’s move yesterday was a culmination of many months spent attacking the left in Labour. The most obvious example was the sacking of Rebecca Long-Bailey for what was a non-offence back in June.

In that instance, too, it was the issue of antisemitism which was used as the official reasoning against her.

There has been an undeniable rise in antisemitism in recent years, from the growth of right-wing neo-Nazi conspiracy theories to EU leaders like Victor Orbán in Hungary regularly spouting anti-Jewish hate speech. And the Labour Party, which went from being a large organisation to a mass party of hundreds of thousands of members, is not immune to this phenomenon – as was recognised by Corbyn in his statement. But it is important to remember that first and foremost it has been driven by the Right.

And as it happens, Orban and Boris Johnson have been known to congratulate each other. This fact hints at the real dynamic at play.

That the establishment in all its hues, from the Blairites to the Tories, from liberal columnists in the Guardian to rabid right-wingers in the Spectator, from the fat cats in the city to the intelligence services in the shadows; that all of them appropriated the deeply important issue of antisemitism and used it as a “factional battering ram” in order to “destroy” Jeremy Corbyn and those that follow him.

The words quoted were spoken by Jewish socialist, Barnaby Raine, on last night’s BBC Newsnight. (The BBC, of course, have played their part in dutifully dragging the Labour left through the mud at every opportunity.)

Raine also noted how Corbyn didn’t shy away from tackling the legacy of the British Empire. This was perhaps his greatest sin.

As regular contributor to Rebel, John Molyneux, pointed out, the British establishment has always been able to rely on the Labour left to fall into line behind ‘Queen and country’. And as Jonas Patrick Liston wrote in early September, while Corbyn’s record wasn’t perfect, it’s impossible to imagine any other Labour leader “laying the responsibility of the Manchester bombings at Western imperialism’s door”. Corbyn’s anti-imperialism put him beyond the pale.

One of the greatest achievements of the establishment was how they changed perceptions of Corbyn over the course of 2018/19.

In the 2017 general election, when Labour exceeded expectations, Corbyn had managed to come across as the decent, honest person he is.

He may not be the most polished of politicians. He certainly made gaffes, and he wasn’t always the most effective performer. But in the run up to GE2017, with a bumbling Theresa May opposite him and years of expenses scandals and sell outs defining mainstream politics, polls consistently showed that the public thought of Corbyn as someone with integrity.

One of the great tragedies of this period has been to watch actual evil-doers (for example, war-criminals Tony Blair and Alistair Campbell) succeed in transfiguring Jeremy Corbyn into looking like one of them. Paul O’Brien was prescient yesterday on Rebel when he wrote of the need to show solidarity with those “capitalism has made monstrous”.

A lifelong anti-racist, Corbyn is no antisemite. Writing in Jacobin, Daniel Finn has comprehensively exposed the farce that has been the EHRC investigation, and also the politicised wielding of antisemitism accusations more generally.

Jeremy Corbyn has, however, been a vocal supporter of Palestine and a critic of the Israeli regime.

Arguably one of the most important legacies of this saga is the damage done to Palestinian solidarity. There is currently no room within Labour to criticise Israel; the Blairite Right have been extremely successful in conflating anti-Zionism with antisemitism. Taking up the brutality being visited upon the Palestinians will not be tolerated.

But Palestinian solidarity still exists, is still strong, in other sections of the wider labour movement in Britain. In unions, in the Labour left – in the movement for Black lives which has invigorated a whole new generation of activists.

And therein lies the key.

The Corbyn years are filled with many lessons. Not a few of them are hard ones. Staying and fighting to change the Labour Party is a task even Wile E. Coyote would recognise as a dead-end.

But while it may be understandable to be demoralised by all that has happened, there is an opportunity for something different.

Corbyn and co., the Labour left, the left unions, social movements; they could strike out together and go down an independent path.

Free from the suffocating monolith that is the British Labour Party, a large and standalone party of the left might just have a chance. But it is important to stress that for such a venture to have a hope of working, it must be a conscious and co-ordinated effort. A scattering and disintegration will not work. The Labour left and the Unions, as well as other left forces, should move as one, stepping out to oppose the barbarity of Johnson and the scheming of Starmer as a single, mass, left party.

There is no denying the anger is palpable. It is too early to say whether Starmer has overplayed his hand, and it will depend on how strongly the left fights back.

Finn is correct when he says that “the principal shortcoming of the Corbyn leadership … was its failure to defend itself robustly”.

For the left in Britain to defend itself robustly, to defend Jeremy Corbyn against these monstrous smears, and to learn the lessons of Corbyn and of a century of British Labour, it must strike out on its own. To finish on Molyneux’s words: “If not now, when? Seize the time!”