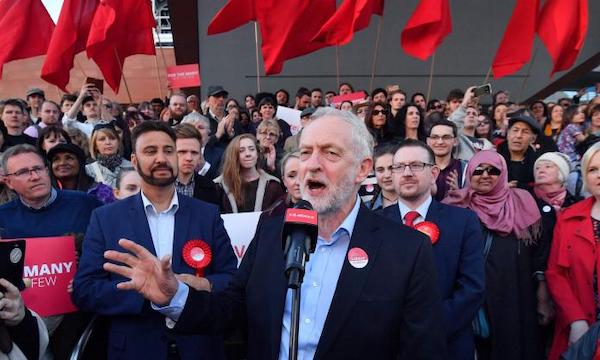 After years of being slandered, Jeremy Corbyn has been suspended from the British Labour Party. It’s a shocking development. It’s not just an attack on Corbyn; it’s an attack on the entire left that will have global consequences. The more it goes unopposed, the worse those consequences will be.

Let’s start by stating the facts. Jeremy Corbyn is not anti-Semitic. There is no evidence that he has ever done or said anything indicating prejudice against Jews. The accusation is a cynical lie intended to intimidate and silence the left.

Unlike the cretins and liars—in Labour, in the British media and elsewhere—who are now slandering him and all his supporters, Corbyn has a decades-long record of struggle against racism and fascism. Like many of us on the left, stretching from left-wing reformists to revolutionary Marxists, he rightly decided that the best way to learn the lessons of all the atrocities carried out in the name of Nazi anti-Semitism is with a lifelong struggle against racism, oppression and imperialist violence.

Even having to write that feels a little dirty. It’s like having to write that there’s no evidence that the Moon landing was faked or that the Earth is flat. Why would a serious political publication spend time engaging with such a self-evidently ridiculous idea as the claim that Jeremy Corbyn was responsible for a revival of institutional anti-Semitism in Britain?

Because that monstrous lie is again being circulated now that Corbyn has been suspended from Labour. The myth of Corbynite anti-Semitism is getting wall-to-wall coverage and near universal endorsement from the entire British political establishment, especially in Sir Keir Starmer’s Labour and its allies in the liberal media.

Jeremy Corbyn was suspended for observing that, for the last few years, claims of anti-Semitism have been exaggerated for political reasons. Not only is this blindingly obvious—it is a massive understatement.

The notion that Corbyn had encouraged or cultivated anti-Semitism, or was even anti-Semitic himself, was a complete fraud from beginning to end, elevated to the level of national myth by the right-wing Labour bureaucracy and their friends in the media, from the formerly fascist Daily Mail to the liberal Guardian. Thepretence that it had something to do with fighting racism was pure theatre: it was a coordinated attack on the most consistently anti-racist leader of a major party in British history, whose track record of anti-fascism was gleefully distorted and buried at a time when the global far right is on the rise.

Anyone who stands up for Arabs and Muslims against Islamophobia, for colonised peoples against military conquest, or for anti-fascism against the modern far right was a target in this supposedly “anti-racist” campaign. Each time Corbyn and his supporters made a gesture of conciliation towards it, the campaign of slander only intensified, until it fatally wounded his electoral support, demoralised his supporters and helped drive him from the leadership.

When Corbyn was leader, for a little while he offered hope to the young, the poor and the oppressed, who thought they had a champion at the head of a major party. Now, Labour is run by a posh prosecutor who prefers to fight the left than to take on Boris Johnson’s murderous failure to protect people from the coronavirus. Yet it is Corbyn’s time as leader—not that of Starmer, or the war criminal Tony Blair—that the scum in Labour are calling the darkest and most shameful period of Labour’s history.

This provocation should be met with outrage and action: defiant collective gestures of solidarity with Corbyn, and with the Palestinian people whose basic right to live free of military occupation is now called “anti-Semitism”; and a renewal of the struggle against austerity and imperialist war that inspired Corbyn’s initial popularity.

But so far, that hasn’t happened. Corbyn and his supporters—parliamentarians such as John McDonnell and left-wing union bureaucrats like Len McCluskey—have condemned Corbyn’s suspension only because it undermines the unity of the Labour Party. What’s needed now isn’t “unity” with Sir Keir Starmer. What’s needed is a forthright defence of the right to challenge austerity, to oppose imperialism and to point out the most obvious injustices of neoliberal capitalism without being smeared and browbeaten into silence and submission.

It’s needed because in Britain, Johnson’s profits-first approach to the coronavirus—which included paying people to eat in restaurants and encouraging them to work from their office at the height of a global pandemic—has killed 50,000 people so far. It’s needed because more than 12,000 illegal settlement units have beenapproved in the Israeli-occupied West Bank this year, and no global movement against the injustices of capitalism can be built if activists are scared to talk about that fact openly. It’s needed because this successful attack on Corbyn will be generalised and used against the left anywhere that a movement against the rich and powerful starts to gain traction.

Israel’s lobbyists will be delighted with the suspension of Corbyn. But although they’ve helped build the narrative, they aren’t responsible for what’s happened to him. When Corbyn accidentally became Labour leader in 2015, it was an affront to the capitalist class that it could not tolerate. Its servants in Labour have led this charge. Those McCarthyite witch-hunters and their capitalist supporters are ultimately responsible for this: they are the enemies to be identified and defeated.

The attack on Corbyn is cut from the same cloth as the war against “Islamo-leftism” in France, led by the suave neoliberal Emmanuel Macron. In both cases, the wealthy and educated “sensible centre” of politics is whipping up a frenzy of hatred to destroy any solidarity between the left and the oppressed. They’re portraying both left-wing activists and religious minorities as an enemy within, who should have no rights to participate in the political process and whose opinions should be dismissed out of hand.

And in France as well, some on the left have softly complained that this right-wing offensive undermines “unity”—this time, the unity of the nation after tragic terrorist attacks. But when you’re under attack from all sides, there’s no point demanding unity with your oppressor. It’s not clever politics. It’s not triangulation. It doesn’t make you look noble. You need to land blows and expose your attackers as the ones encouraging racism, spreading lies and shifting society to the right for their own narrow gain.

How did it come to this? A few years ago, Corbyn was riding a wave of popular support, speaking at enormous demonstrations about the importance of socialism, seemingly unassailable. Now he is part of an embattled minority, being driven in disgrace from a party to which he has shown incredible loyalty through its decades of criminal policies. There was barely any sign of “Corbynism” when British capitalism buckled under the coronavirus crisis; it was like that political movement had never existed.

As leader, Corbyn was obsessed with the idea of forming an anti-austerity government and overturning the legacies of Margaret Thatcher and Tony Blair. But he could win that majority only with the support of right-wing Labour MPs—so whenever momentum was on his side, he never initiated a fight that would risk a split in the party.

In particular, he never campaigned to build a wide understanding among his young supporters that anti-Zionism is not anti-Semitism. While Corbyn was leader, after years of growing attacks on him from the right wing and centre of the party, Labour even adopted the ridiculous IHRA “definition” that formally classes opposition to Zionism–a principled anti-racist position–as a form of anti-Semitism. At a small meeting of a leadership committee, Corbyn moved an amendment to the policy; his amendment was defeated, the policy made it through, and no more fight was waged against this terrible concession.

Bit by bit, the campaign of slander advanced and extracted concessions, while Corbyn prioritised maintaining the “unity” of a party that was trying to crush his project. Those priorities pose a serious challenge now the fight has reached this extreme. The lure of parliamentary majorities will make it much harder for decent supporters of Corbyn to do what they should have done decades ago—fight for socialism outside the constraints of a right-wing, pro-capitalist, imperialist Labour Party.

The occupation of Iraq provoked a massive outpouring of anti-war resistance that defined a generation and discredited the most extreme parts of Blair’s neoliberal project, but Labour remained as a lure to those who wanted the world to be a better place. That has given Labour’s right-wing bureaucrats the power to smear and sabotage anti-racist fighters like Corbyn, knowing that the promise of a “big tent” party that might form government will dampen down any counter-attack from the left. Let’s hope that the present crisis of capitalism, and the vile slanders on Corbyn, provoke some resistance that can reach new levels of radicalism, and break free of those political limits, and hasten the development of an anticapitalist current that builds its power elsewhere.

Forget cobbling together parliamentary majorities in the search for governmental power. Forget “unity” with the forces of the establishment and the bureaucrats who are leading this charge or passively endorsing it. We need unity of the oppressed in the struggle against the system that threatens us all. That task is made harder everywhere if any inch is given to this slanderous campaign against Jeremy Corbyn—because the target of the slander tomorrow will be whoever next makes a political breakthrough against the ruling class.

Ecosocialism: an alternative to global capitalism
In defense of Jeremy Corbyn