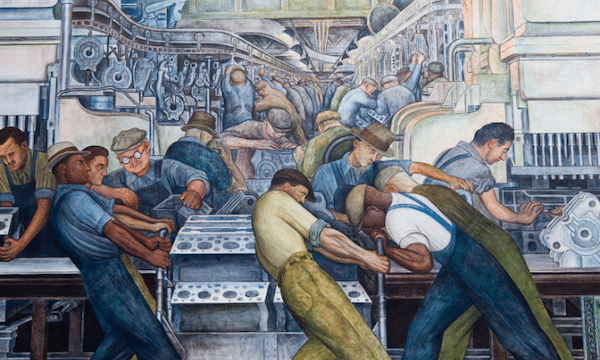 The word “exploitation” is special for Marxists because it contains a unique insight about the way wealth is produced in class societies. It’s the key to the Marxist argument that a revolution to end oppression won’t just require a change in the political system, but a deep transformation in the way we work.

In everyday life, the word is used in a few different ways. It usually describes those times when powerful people or institutions degrade or abuse someone, or use their power to take advantage in an extreme and unfair way. The label is often applied to especially unethical capitalist behaviour. You might say that when landlords use the desperation of unemployed tenants to demand sex instead of rent, it’s exploitation. When multi-national mining companies destroy ecosystems and leave the local economies of underdeveloped countries devastated while making off with their natural resources, or when big name clothing brands use sweatshop labour policed by violent dictatorships, these are also types of “exploitation” in the everyday sense of the word.

Those things certainly are examples of the moral depravity of capitalists. But when Marxists talk about “exploitation”, we are using it to describe a process that happens at a more fundamental level, one that even the most “ethical” capitalists participate in—a process that makes our society flawed and demands a revolution.

Human beings use technology and organise to produce wealth collectively. As we develop more advanced technology and more sophisticated social organisations, we can produce more wealth than we need to live; we can produce enough for some people, at least, to have comfortable lives. At a certain point in human history, societies became internally divided; a minority of the population began to control the majority’s labour, how they produced wealth, and where the product went. Social classes emerged. A minority controlling the processes that we use to create wealth, using their control to dominate the work and lives of others, and deciding what happens to the extra wealth that has been produced—the “surplus”—is what Marxists refer to as “exploitation”.

Exploitation was an invention. Not all human societies developed it. It doesn’t seem to have defined life in Australia before the European invasion, for example. But once it developed, it soon became the general rule, and human life in most of the world became defined and shaped by how exploitation was organised.

It has changed from place to place and over time; there are many ways to control and dominate the labour that produces wealth. In ancient Athenian “democracy”, male citizens owned slaves who produced the wealth that gave their masters the time and leisure to engage in politics and philosophy. In late medieval Europe, the ruling class used sophisticated military technology—fortified castles, war horses, armour and well-made weapons—to terrorise peasants and other labourers into giving up food and other things they produced.

There are two immediate ways that capitalist exploitation stands out in comparison to previous periods. Firstly, it’s much more extreme. The sheer number of exploited people, the absolute amount of wealth they produce and their total lack of control over the production process puts to shame the level of exploitation achieved by any Pharaoh or Holy Roman Emperor. We see the evidence in the unbelievable amounts of waste and inequality that characterise capitalism. Secondly, it’s not as obvious. Most exploited people in capitalism aren’t officially slaves or peasants; we seem to have the same basic rights as the people at the top of society, but we’re just poorer for some reason. Capitalism seems to be based on the principle that everyone’s basically free and formally equal. So how can it be a society based on classes and exploitation?

Capitalist exploitation rests on the institution of private property. That doesn’t mean personal ownership of the things we need to live. The property we’re talking about is the stuff needed to produce wealth—capital. It’s the huge bucket-wheel excavators and mining trucks, the cargo ships and the cranes at the ports, the factories, farms, power plants, server clusters and office buildings. Without these, it’s impossible to produce wealth.

These technologies and assets (what we call the “means of production”) are controlled and owned by a minority of the population: the capitalists. That’s how capitalism, while making everyone formally equal, is based on a deep, fundamental division into classes.

There are two basic ways to live in capitalist society: you can control the means of production and hire people, or you can try to find someone who’ll hire you. On paper, we’re all just private citizens trying to make money. But in real life, a minority controls the work and lives of the majority, who don’t own any factories and can participate in the production process only by selling our capacity to work. If we’re going to get a job, we have to work on the capitalists’ terms.

And what are those terms? A medieval king might have demanded food and fine clothes from his subjects because he enjoyed luxury. But a capitalist who owns a screwdriver factory doesn’t employ workers because she really loves screwdrivers and wants as many as possible for her personal collection. Capitalists hire workers if, by hiring them, they can those workers create more value every week than they are paid in a wage.

The capitalists pay for the machinery and its maintenance, and the rent and the bills, along with the workers’ wages. Whatever the workers produce, the capitalists have the right to sell. Economic life is ruled by the accumulation of profits, regardless of the effect on humanity and the planet. So how do the capitalists make sure they produce a surplus—achieve exploitation—and make their money? They have to fight to make sure workers produce as much as possible for as little pay as possible. A constant struggle takes place over pay, working hours, labour intensity and working conditions. We produce wealth under oppressive conditions, as our exploiters try to control and dominate our behaviour for their interests.

One worker in Amazon’s U.S. warehouses, interviewed in the Guardian, said he quit because the conditions of a capitalist factory in a so-called “free country” reminded him of the prison he’d recently left. “I would rather go back to a state correctional facility and work for 18 cents an hour than do that job”, he said. Capitalist “freedom” to hire and fire, and a worker’s “freedom” to sell their capacity to labour to any boss, result in a society based on a fundamental lack of freedom; bosses act like mini dictators in the workplace, while we have no say in what happens to the things we produce.

Some think that because exploitation is about private property, we should simply replace that with state ownership of the key economic resources. But if the state, rather than private corporations, controls and owns all the factories, society is still characterised by exploitation. It would still be ruled by “private property”, in the specific sense that a minority of the population—the state officials—would control the technology needed for labour to take place, and that would give them the power to control everyone else’s working life, and to decide what happens with the surplus that gets produced. This kind of exploitation existed in Stalin’s Russia and in a few similar countries today, and they don’t represent any kind of escape from capitalist exploitation.

What would a society free of exploitation look like? Ending the division between those who give orders and those who work. If we had collective, democratic control over economic life, we could make decisions about the work we do, and where the surplus goes, in the collective interests of humanity, not based on what will accumulate profits for a minority of exploiters. The intelligence and creativity of humanity could be put to work using the incredible technology we have produced to improve our lives and our environment.