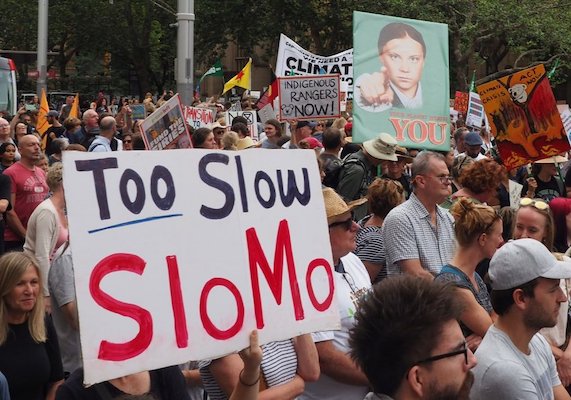 Over the past four decades or so, various leftists have become more sensitive to the environmental degradation in developed and developing capitalist societies and post-revolutionary societies, particularly in the former Soviet Union and, in recent times, China.

As a result, they have sought to develop an ecosocialism, ecoMarxism or ecological Marxism.

Robert Albritton in Eco-Socialism for Now and the Future: Practical Utopias and Rational Action states that the earliest use of the term of the term ecosocialism he uncovered appeared in a pamphlet titled Eco-Socialism in a Nutshell, published in England by the Socialist Environment and Resources Association in 1980.

Since then, the literature on ecosocialism has become quite extensive and is regularly featured in journals such as Monthly Review and Capitalism Nature Socialism and various websites, particularly Climate and Capitalism edited by Canadian ecosocialist Ian Angus.

Ecosocialism has even made some headway among Marxist scholars in China.

In addition to capitalism exploiting workers and many other people, John Bellamy Foster in Marx’s Ecology argues that Karl Marx himself recognised that capitalism is in metabolic rift with nature.

In reality, various genres of ecosocialism have emerged over the past four decades, too many to discuss in a short article.

However, it is important to highlight socialist ecofeminism as one important genre of ecosocialism. Ariel Salleh, an Australian sociologist and author of Ecofeminism as Politics: Nature, Marx and the Postmodern, has served as a long-time proponent of socialist ecofeminism. Indian ecofeminist Vandana Shiva in Earth Democracy asserts that all beings, human and nonhuman, have a natural right to sustenance and that a just society is based on a living commons and economic democracy.

More recently, Leigh Brownhill and Teresa E Turner employed the term “ecosocialist ecofeminism” which seeks to blend the best elements of both ecosocialism and ecofeminism, which they say is not only an alternative to capitalism but an alternative for socialists as well as other progressive leftists disillusioned by the electoral ascendancy of the far right in Brazil, Bolivia, the Philippines, Poland, the United States, Britain and elsewhere.

Ecosocialism constitutes what the late Erik Olin Wright termed a “real utopia”—a utopian vision–that is achievable but only through much theorising, social experimentation and social action.

As the capitalist world system continues to self-destruct due to its exploitative, oppressive, socially unjust and environmentally unsustainable practices, eco-socialism seeks to provide a vision to mobilise people around the world, albeit in different ways, to prevent ongoing human socioeconomic and environmental destruction.

More so than ever, it is important for radical activists and scholars to envision future scenarios and strategies for achieving an alternative world system.

Ecosocialism seeks to come to grips with the growth paradigm inherent in capitalism and to which post-revolutionary societies subscribe to today, China being a case in point.

It rejects a statist, growth-centred, or productivist ethic and recognises that humans live on an ecologically fragile planet with limited resources that must be sustained for future generations.

Common ownership, which would blend centralism and decentralism, has the potential to place constraints on resource depletion. The construction of ecosocialism needs to be based upon a commitment to a long-term sustainable balance between sociocultural systems and the natural environment.

Albritton argues that ecosocialism “has come to be seen by large numbers of peoples as a theoretical and action concept most appropriate for mobilizing against capitalism in the 21st century”. Ecosocialism constitutes a vision, the achievement of which will require a drawn-out process that will meet with strong resistance from the capitalist class, its political allies and international bodies such as the World Bank, the International Monetary Fund and the World Trade Organization.

However, the mal-distribution of resources on a global scale that capitalism produces is bound to keep alive notions of social justice and equality, deep democracy and socialism in oppressed classes.

Anti-system movements, including labour, ethnic and Indigenous rights, women’s, anti-corporate globalisation, peace, environmental and climate justice movements, are sure to be permanent features of the global political landscape as long as capitalism remains hegemonic.

These movements can play a crucial role in creating a socio-ecological revolution, and moving humanity to an alternative world system–one committed to social justice, deep democracy, environmental sustainability, a safe climate and planetary health. But the process is a tedious and convoluted one with no guarantees, especially in light of the disparate nature of these movements.

Although at present, or in the near future, the notion that ecosocialism may be implemented in any society, developed or developing, or a number of societies, may seem unlikely, history tells us that social changes can occur quickly once economic, political, social structural and environmental conditions have reached a tipping point–a term that climate science has popularised.

Current patterns of ecological degradation and the mounting pressure of social inequality, along with emerging infectious diseases which has played out before our very eyes in the form of the COVID-19 pandemic, contain the fuel for social change. Continuation on the current pathway will, over time, only lead to deeper and deeper crises, including an ever-escalating climate change crisis, the result of growing greenhouse emissions spewed by the capitalist treadmill of production and consumption.

I often hear climate activists say we do not have enough time to transcend global capitalism to be able to create a safe climate for humanity. Thus, they argue that climate activists need to collaborate with the supposedly more progressive corporate leaders and politicians in tackling the climate crisis within the parameters of the existing global political economy.

But, combating both climate change and global capitalism go hand-in-hand.

While the more enlightened corporate elites and their political allies may permit some measures that contribute to climate change mitigation, such as renewable energy sources, energy efficiency and electric cars, they will certainly not consciously permit the eventual demise of global capitalism and the emergence of an ecosocialist world system.

How can we expect the system that created the problem to solve the problem?

Despite the daunting difficulties that much of humanity currently faces, and will continue to face over the course of this century, it is important that radicals, whether ecosocialists or ecoanarchists, keep plugging away at the challenging global capitalism and its various national manifestations.

In Australia, that must include conversations, teachings and writings as well as being involved in anti-systemic movements by struggling to create new anti-capitalist left parties, pointing out alternative ways of organising the world along ecosocialist principles and listening to critical input from other progressive perspectives, including ecoanarchism, ecofeminism and Indigenous peoples.

Humanity is obviously at a crossroads or perhaps several crossroads: one is business-as-usual which is sure to result in dystopia; another is a shift to some variant of green capitalism, which is gaining considerable support; and finally an ecosocialist vision that, while muted at the this time, will hopefully become stronger as the need for it becomes more apparent to the mass of humanity.