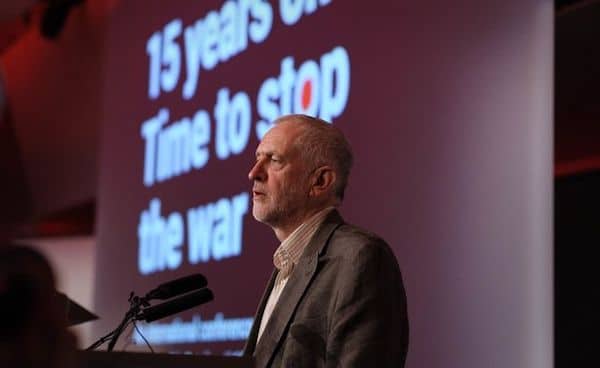 Despite this, Labour leadership remains adamant. Kier Starmer’s intense focus on marginalising Jeremy Corbyn and his supporters is part of a pattern. From the start of his leadership, Corbyn suffered an unprecedented level of attacks not just from the Labour right but from all corners of the establishment.

The right-wing of the Labour Party plotted against him from the start. Highlights included the choreographed resignation of 44 frontbench MPs in so many hours after the 2016 Brexit vote, the weaponization of the antisemitism issue by senior Labour figures exposed in Labour’s internal report on antisemitism and the associated 2019 split led by Luciana Berger and Chuka Umunna.

Anti-Corbyn manoeuvres went way beyond Labour. Early in his tenure, generals briefed journalists that he was a security threat and that the armed forces would not serve under him. For a year MI6 refused the normal meeting with the leader of the opposition. In 2019, senior civil servants told the Times that he was ‘too frail’ to be prime minister and that he was ‘losing his memory’.

Tony Blair’s extensive networks were fully mobilised as Peter Mandelson made clear when he promised to ‘work every single day in some small way to bring forward the end of his tenure in office’. Even the U.S. administration was in on the act with Secretary of State Mike Pompeo giving private assurances that the administration would ‘push back’ against Corbyn even before he got elected and adding, ‘It’s too risky and too important and too hard once it’s already happened.”

The tabloid media spent the five years of his leadership demonising Corbyn. First as poorly dressed, sexist and unstatesmanlike and then as a national security threat and a terrorist sympathiser as things became more alarming. The liberal media joined in the sport, running twice as much hostile as favourable coverage.  As a letter signed by one hundred media academics put it, ‘Corbyn has been treated from the start as a problem to be solved rather than as a politician to be taken seriously.’

It is no accident that so many of the attacks centred on questions of security and foreign policy. It was a major cause of concern for those in power that unlike any other Labour leader since the 1930s Corbyn openly opposed Britain’s aggressive foreign policy and the special relationship with the US. He was widely mocked for being the chair of the Stop the War Coalition when he was elected. What was more worrying was that Corbyn stuck to his anti-war principles after he became leader.

One of the early rebellions against his leadership came in December 2015 when eleven cabinet members, including shadow foreign secretary Hilary Benn, broke with Labour policy and voted for the Tory push to extend Britain’s bombing of Iraq to Syria. The rebellion was backed by a political and media chorus echoed by some on the left demanding Corbyn distance himself from Stop the War and ludicrously that he boycott Stop the War’s Christmas dinner. Corbyn refused, came to the event and publicly stood by the Stop the War Coalition as ‘a vital democratic campaign’.

Corbyn had already caused consternation within the establishment by repeatedly refusing to countenance pushing the nuclear button if in office, despite the fact that Labour was committed to renewing Trident. He promised too that a Labour government would recognise the Palestinian state. In 2016, he broke another foreign policy taboo and directly confronted Blair’s legacy by apologising on behalf of the Labour Party for the Iraq war.

The following year he responded to the appalling Manchester terrorist attack by hosting a high profile press conference at which he linked the spread of terrorism with “wars our government has supported or fought in other countries and terrorism here at home”. As Corbyn said this was the private view of most in the security services. Corbyn was so transgressive because he was prepared to speak openly about such matters. By doing so he threatened to shine a light on the dark heart of the British foreign policy establishment; its collusion in regime change, torture, illegal arms sales and the enormous suffering caused by the wars in the Middle East and beyond.

He was also prepared to draw policy conclusions. As he said at the press conference:

“We must be brave enough to admit the ‘war on terror’ is simply not working. We need a smarter way to reduce the threat from countries that nurture terrorists and generate terrorism.”

After the press conference, the media predicted a massive public backlash. That didn’t happen. Instead, polls awkwardly showed that 75% of the British public backed Corbyn’s stand.

Particularly after the impressive gains that Corbyn-led party made in the 2017 election, the British establishment was presented with a profoundly serious and utterly unprecedented political problem. Labour was gaining popularity under a left-wing leader who openly opposed the strategy of maintaining a global role for Britain by supporting U.S. power projection around the world. Given the importance of the arms trade, financial services and foreign investment within the British establishment, the ‘global Britain’ strategy is simply non-negotiable.

This is one of the reasons why the establishment has pursued the anti-Corbyn campaign with such vigour and vitriol. And why the campaign continues. Corbyn represents popular opposition not just to austerity and inequality, but to foreign policies that underpin the very basis of the modern British state. Corbyn threatened to disrupt the fundamentals. This explains the venom, and it is why it is so crucial that the whole of the left and the wider movement rallies around to defend him, his record and his politics.

This article was originally published on Stop The War.