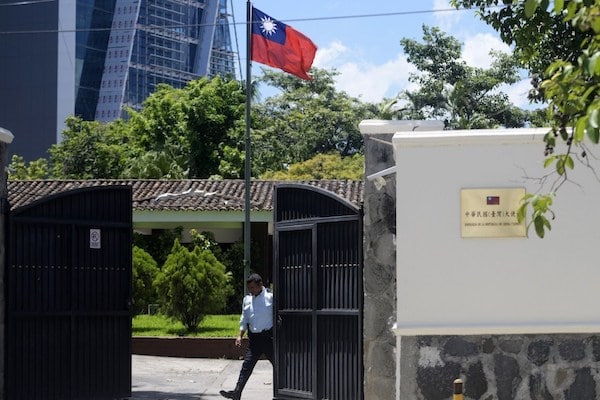 A guard closes the gate of the Embassy of Taiwan in San Salvador on August 21, 2018. – China and El Salvador established diplomatic relations Tuesday as the Central American nation ditched Taiwan in yet another victory for Beijing in its campaign to isolate the island. (Photo by MARVIN RECINOS / AFP)

This article was produced by Globetrotter, which provided it to Asia Times.

On August 20, 2018, El Salvador’s leftist president Salvador Sánchez Cerén announced on national television that his country would break its ties with Taiwan and recognize the People’s Republic of China. This was in accord with international law, said Sánchez Cerén, and it would bring “great benefits for our country.”

Not long after, U.S. Senator Marco Rubio took to Twitter to announce that this move “will cause real harm to relationship with U.S. including their role in #AllianceforProsperity.”

Earlier, both the Dominican Republic and Panama had made the shift, but Rubio said El Salvador would be specially punished because it was ruled by the left-wing Farabundo Martí National Liberation Front (FMLN). It did not seem to matter to Rubio that his own country, the United States, had shifted its ties to China from Taiwan in 1979.

The “Alliance for Prosperity,” which was Rubio’s hashtag, referred to former U.S. president Barack Obama’s deal with several Central American countries to provide some modest development aid in exchange for a beefed-up police force and the prevention of transit of migrants toward the United States; this was border enforcement dressed up as development.

Rubio’s threats were inconsequential; the money was too little, and the price paid by the populations of Central America was too steep.

In November 2018, Sánchez Cerén went to Beijing, where he met with Chinese President Xi Jinping. Trade relations were front and center of the discussion, including encouragement for El Salvador to participate in China’s growing Belt and Road Initiative.

A year later, in December 2019, Sánchez Cerén’s successor, Nayib Bukele, arrived in Beijing to reaffirm the ties between El Salvador and China, as well as the desire of his center-right government to develop Belt and Road projects.

It did not seem to matter if the president of El Salvador was from the right or the left; both were eager to acknowledge the importance of China’s role in the region, and both were willing to “harm”–as Rubio put it–their relationship with the United States.

As news of the Chinese deals were announced, Bukele was criticized for getting El Salvador into a “debt trap.” He responded firmly on Twitter. “What part of ‘non-refundable’ do you not understand?” he asked, referring to the fact that China was giving El Salvador grants and not loans.

But the game was not over. On January 30, 2020, Bukele stood beside Adam Boehler, the head of the U.S. International Development Finance Corporation (DFC), to sign an agreement to implement “América Crece” in his country.

En route back to El Salvador from China in December, Bukele stopped in Tokyo, where then-prime minister Shinzo Abe warned him not to allow Chinese companies to invest in La Unión port. China’s Asia Pacific Xuan Hoa Investment Company had been in talks to invest a considerable amount of money in the port.

The U.S. government had campaigned against this, and now Abe whispered the United States’ warning into Bukele’s ear. The chill of the tensions between Washington and Beijing stopped Bukele’s hand; it was inevitable that he would seek to placate the United States as far as possible without breaking with China.

The instrument used is América Crece, or “Growth in the Americas,” a U.S. project that was launched in 2018. The U.S. says China is not transparent with its deals, but there is almost no information available on América Crece (and the U.S. State Department and the DFC did not immediately respond to requests for comment).

An FAQ on the U.S. State Department website says the program “seeks to catalyze private-sector investment in infrastructure in Latin America and the Caribbean.” The U.S. government will operate to open doors for U.S. (and at least in one case, Israeli) companies.

The budget for the agency is US$60 billion. This September, a bipartisan consensus drew up the America Labor, Economic Competitiveness, Alliances, Democracy, and Security (America LEADS) Act to undermine Chinese investments. Both Democrats and Republicans are committed to this anti-China agenda.

One of the main DFC projects in El Salvador is the construction of a natural-gas plant in Acajutla, which is owned by the U.S. energy firm Invenergy and its Salvadoran subsidiary Energía del Pacífico. U.S. Ambassador Ronald Johnson said the DFC would provide financing for the project (it will be about $1 billion).

Eyebrows have been raised in El Salvador about the lack of concern for the environmental impact of the plant as well as the subsea pipeline on marine life and on the coastal habitat.

América Crece funds have been promised across the border in Honduras to build the Jilamito hydroelectric plant. On August 13, U.S. Representative Ilhan Omar and 27 other representatives wrote a letter to Boehler in which they pointed out that the project “has met a sustained campaign of opposition from affected local communities since it was announced.”

A lawyer for the communities, Carlos Hernández, was assassinated in April 2018, after the attacks that killed activist Ramón Fiallos in January 2018.In late July 2020, armed men entered the home of Sneider Centeno in Triunfo de la Cruz and abducted him. They did the same to three other leaders of the Garífuna community.

The U.S. Congress members wrote that the DFC was cutting deals with Honduran President Juan Orlando Hernández, who “has a record that includes gross human-rights violations, credible accusations of electoral fraud, deep connections to narco-trafficking and organized crime, and corruption.”

There is ugliness in América Crece.

The U.S. has committed $60 billion to the DFC. Meanwhile, China plans to spend at least $1 trillion on the Belt and Road Initiative. Part of the Chinese money comes, as Bukele wrote when he left Beijing, as grants.

All of this irks Washington. David Malpass, U.S. undersecretary for international affairs, said in February 2018 that the U.S. faced a serious challenge from “China’s non-market activities.”

China invests and provides grants, Malpass said, with no insistence that the recipient countries “improve” their “macroeconomic policies”; in other words, China does not make it a habit to place conditions on the loans such as to undermine labor laws or to cut subsidies for health and education (as the International Monetary Fund and the U.S. Treasury Department often do); nor does China privilege the private sector. These are the “non-market activities.”

In a recent article, Professor Sun Hongbo of the Chinese Academy of Social Sciences wrote that the U.S. government “pressure[d] Latin American countries to cooperate with the U.S. global policy agenda,” so that these countries–such as El Salvador–would have to choose between Beijing and Washington. No such pressure comes from China, wrote Sun.

This is a view echoed in Latin American and Caribbean capitals; they face pressure from Washington to break ties with China, something loathsome to most of the countries, as it has been for El Salvador’s Bukele.