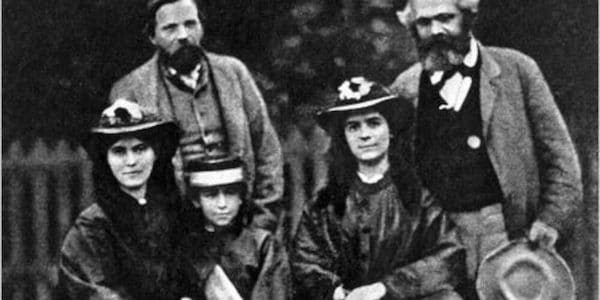 Friedrich Engels, whose 200th birthday falls on 28 November, had a very personal connection with Ireland. Soon after being sent to help run the family textile factory in Manchester in 1842 he met twenty-year-old Mary Burns, daughter of an Irish dyer. Engels’s friend the revolutionary German poet Georg Weerth wrote a poem about Mary after he met the couple. It is a rare contemporary account:

Mary Burns was instrumental in introducing Engels to the horrendous conditions of the Manchester proletariat. As the 24-year-old Engels wrote in The Condition of the Working Class in England(1845), “The rapid extension of English industry could not have taken place if England had not possessed in the numerous and impoverished population of Ireland a reserve at command.” However, the Irish also brought a tradition of struggle. Many became trade unionists, and Feargus O’Connor was elected to Parliament in 1847 as the first Chartist.

The situation of proletarian families led Engels much later to note in The Origins of the Family, Private Property and the State (1884):

now that large-scale industry has taken the wife out of the home onto the labour market and into the factory, and made her often the bread-winner of the family, no basis for any kind of male supremacy is left in the proletarian household.

Engels understood marriage and family as directly linked to the ruling class system, in which the accumulation of wealth led to marriage, strict monogamy of women, and female submission: “. . . in proportion as wealth increased, it made the man’s position in the family more important than the woman’s . . . [and the resulting] overthrow of mother-right was the world historical defeat of the female sex.”

Engels decided never to marry. He lived first with Mary Burns and, following her early death, with her sister Lydia (Lizzie). In effect he led a double life: one as a manager in his father’s factory, the other in a suburban cottage rented under an alias for Mary and Lizzie, his real home.

In 1856 Engels and Mary visited Ireland together. He wrote to Marx following this trip: “Ireland may be regarded as England’s first colony,” and “I never thought that famine could have such a tangible reality.”

Both Mary and Lizzie were very involved with and supported the IRB’s struggle for an independent Ireland. Aged only forty, Mary died suddenly on 8 January 1863. She had been Engels’s partner for twenty years. He was deeply shaken when Marx failed to respond compassionately to his loss; it nearly broke their friendship.

After Mary’s death Engels and Lizzie became lovers and moved into a small terrace house in Mornington Street in the Ardwick district of Manchester. This is the house where Marx visited a number of times, as did his daughter Eleanor. Eleanor struck up a deep friendship with Lizzie and through her became an Irish patriot. Lizzie was a member of the Fenian Society, and there are indications that she joined the First International.

In 1867, when Manchester police captured two IRB men, Kelly and Deasy, Lizzie became involved in the unsuccessful plot to rescue them. She may even have hidden them briefly. Following their execution, in both the Marx and Engels-Burns households the women expressed their support for Ireland by wearing green ribbons with black for mourning.

In September 1869 Lizzie, Engels and the fourteen-year-old Eleanor Marx spent three weeks in Ireland. The demand for an amnesty for the IRB prisoners held in British jails had revived the liberation movement. Tens of thousands of people were out on the streets of Dublin and Limerick. Engels planned to write a comprehensive study of Ireland and began research in earnest.

Lizzie and Engels moved to London in September 1870. Their house became a centre for the socialist movement. Lizzie died on 12 September 1878. Engels wrote about her:

She was of genuine Irish proletarian stock and her passionate, innate feeling for her class was of far greater importance to me and stood me in better stead at all critical moments to a greater extent than all the pseudo-intellectual and clever-clever ‘finely educated’ and ‘delicate’ bourgeois daughters could have done.