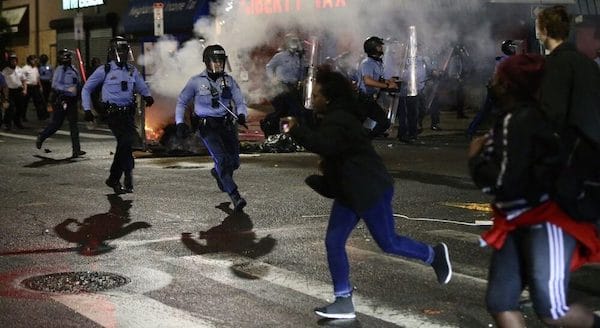 The Contours of Resistance Beyond the Election

No matter which party wins the White House on November 3, one thing is certain: The objective crisis of the system will force the winning political party to be guided by a logic that concludes domestic repression and warmongering abroad are necessary.

From occupied Philadelphia to occupied Palestine, the people in the colonized spaces of empire will find it hard to discern a difference between how Democratic and Republican oppressors treat them. In Philadelphia, Trump’s Department of Justice (DOJ) prosecutors borrowed a page from the Obama administration’s DOJ playbook. If folks recall, after the Baltimore uprisings in 2015, Obama’s DOJ slapped federal charges on the resisters Obama had referred to as “thugs and criminals.” Just last week, the Trump DOJ swept into Philly and nationalized a local law enforcement by arresting and slapping federal felony charges against four African activists.

So, while the Black Alliance for Peace (BAP) takes no official position on the election or on its outcome, we have been consistent as an alliance: We are clear the fight for our people will continue. We do not have the luxury of believing any illusions to the contrary.

That is why the demands we raised as part of our Candidate Accountability Campaign will continue and will anchor our umbrella campaign, No Compromise, No Retreat: Defeat the War Against African/Black People in the U.S. and Abroad.

BAP is clear: It is only through the construction of alternative, independent popular power that the suffering caused by the irreversible crisis of the system can be mitigated. We must move to create a new system in which war, militarism and repression are permanently eliminated from the realm of human concerns.

For the exploited, colonized and oppressed, our fate will not be determined on November 3. The U.S. duopoly is incapable of addressing our human needs because the interests of the people and the planet—and the goal of peace—are contrary to the narrow interests both the Democratic and Republican parties are committed to upholding.

Therefore, there will be No Compromise and No Retreat in the face of evil—lesser or otherwise.

On the October 20 episode of WPFW’s “Voices With Vision”, Netfa Freeman, who represents Pan-African Community Action (PACA) on BAP’s Coordinating Committee, and co-host Craig Hall, dedicated the episode in the honor of Congo Week. In the first half of the show, journalist, author and political prisoner Mumia Abu Jamal and Black Agenda Report Senior Columnist and BAP Coordinating Committee member Margaret Kimberley helped listeners properly visualize this U.S. election season reality. The episode featured Lowkey’s “Obama Nation”. That was followed by an audio editorial by independent journalist Ann Garrison that opened Voices With Vision’s Breaking the Silence Congo Week 2020 program. For the second half of the hour, Netfa and Craig went deeper into the issues impacting the Great Lakes Region of Africa by interviewing author Justin Podur about his book, America’s Wars on Democracy in Rwanda and the DR Congo.

The October 27 episode was dedicated to properly contextualizing the illegal police and military violence committed against unarmed, peaceful protesters in Nigeria and the U.S. connections that too many are not making. Netfa and Craig spoke with Nigeria-based Joint Action Front Secretary Abiodun Aremu, who is a member of the Amilcar Cabral Ideological School Movement in Nigeria. The episode was mixed with Nigerian Fela Kuti’s “Sorrow, Tears, and Blood”.

BAP’s recent press release on the BAP-PACA joint statement on the neocolonial relationship between the United States and African leaders that has led to the Nigerian SARS protests was featured in Black Star News and Australia’s Green Left.

Netfa was interviewed about “U.S. Elections 2020: The Dynamics Of Personality Politics” on Radio 786 in Cape Town, South Africa.

Margaret gave a talk 27 minutes into the Campaign for Nuclear Disarmament “Election Edition” panel about why an election won’t stop the United States from being a fascist state. Then she spoke with UrWorld News Media, hosted by BAP member Solomon Comissiong, about why Trump and Biden are bad choices for Africans. Margaret made a similar point to CGTN’s “The Point with Liu Xin”.

In Philadelphia, BAP member Asantewaa Nkrumah-Ture spoke at a rally Tuesday following William Wallace Jr.’s death during a police altercation about the need for community organization and Community Control of the Police (CCOP). She ended her speech asking residents not to turn demonstrations into rallies on behalf of political candidates whose actions indicate support for the police. Then, BAP Coordinating Committee member YahNé Ndgo spoke at a demonstration Saturday. This came after police arrested three activists who were charged with federal felonies, a testament to the heightened fear tactics the state is deploying to squelch dissent. BLM Philly, of which YahNé is a member, held a Halloween event that afternoon to support the community.

In Greenville, South Carolina, BAP member Efia Nwangaza was interviewed by WYFF at a Breonna Taylor protest, where she spelled out that Black women get to determine for themselves what safety looks like. The Malcolm X Center for Self-Determination and Human Rights, which she founded, hosted a ceremony in Breonna’s honor that was covered by WSPA. The center also organized the 25th annual National Day of Protest on October 22, which local press covered. Efia also was quoted by WYFF on the matter of a local sheriff endorsing U.S. Sen. Lindsey Graham (R-SC): “Once the election is over and the winning candidate puts on taxpayer clothes, gun, badge, authority, he or she represents everyone. And unless and until everyone authorizes that successful candidate to claim that another candidate represents all of our interests, then we have been violated.”

November 7: Margaret will speak on the No Cold War webinar, “Will the US Presidential Election Change the New Cold War?” Register here.

November 7-8: The Black Is Back Coalition calls on all to march, rally and convene in Washington, D.C., during the “Black People’s March On White House.” Registration is requested. Read their article in Black Agenda Report.

November 19: Netfa will speak on a panel, “Unpacking the Implications of American Exceptionalism.” Register at least 24 hours in advance.

November 19: AfroResistance will host a webinar, “Housing Rights as Essential to Racial and Gender Justice”. Simultaneous English/Portuguese/Spanish interpretation will be available. Register here.

December 4: Save the date for a Women’s International League for Peace and Freedom Disarm Committee webinar on AFRICOM and human rights that will feature speakers from international women’s associations and Margaret. Look for registration information in an upcoming newsletter.