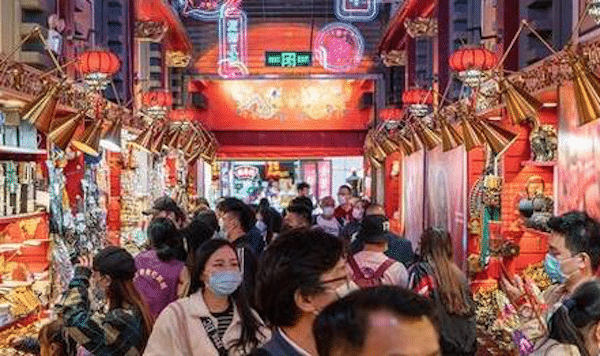 The past year has brought into sharp relief the significant differences between China and the rest of the world. The experience of the pandemic is probably the most extreme and definitive expression of that: the ability of China to contain the spread of the virus and prevent a renewed outbreak of any substantive nature is unmatched by almost all other countries, with the exception of a few outliers.

The reasons for this certainly deserve separate study, but what is also worth noting is how this has also been associated with a relatively rapid recovery of the Chinese economy from the decline of the first quarter of 2020 to relatively rapid growth once again. This is contrary to almost every other major economy.

The differences are particularly marked with the rest of developing Asia, which until recently reflected similar tendencies as China, often precisely because the rest of the region was benefiting from the increasingly close and dense trade and investment links with that economy.

But ever since the trade war with the US, which forced China to shift to greater reliance on domestic demand, and certainly since the COVID-19 pandemic struck, there has been growing divergence between China and the rest of developing Asia, particularly those economies (often clubbed as ‘Emerging Asia’) that are more integrated with global capital markets.

While there are significant differences amongst these countries, it may be that the differences between China and this group outweigh the differences within the group (with the exception of Vietnam, which appears to be following a trajectory closer to that of China).

This divergence has actually been evident for some time now in terms of the global impact of the region. The latest World Economic Outlook of the IMF, released a few weeks ago, provides evidence of this.

Figure 1 presents the current account balances of China and the rest of the region, as shares of global GDP. For the past 15 years, as China has been running very significant current account surpluses, the rest of developing Asia has been mostly in deficit, even though these have been relatively small deficits in the aggregate. (All figures are based on data from the IMF’s World Economic Outlook October 2020 database.) Effectively, China has been sucking in global demand, while the rest of the region has been adding to demand in the net.

However, their smaller aggregate deficit has not been sufficient to outweigh that impact. The recent emergence of the rest of the region into current account surplus is essentially a reflection of the collapse in imports because of declining domestic demand as a consequence of the pandemic and lockdowns, mirrored in falling world trade.

A similar point can be made about international investment positions, shown in Figure 2. Throughout the period, and especially after the Global Financial Crisis, China’s net international investment position has remained strongly positive, growing to nearly 3 per cent of world GDP, while the rest of developing or “emerging” Asia together continues to have a negative net position. China, which was seen as a beneficiary of export-oriented foreign investment in the past, is now an important driver of investment and growth in the rest of the world. The rest of Asia as a group, on the other hand, still remains reliant on foreign investment, real and financial. If geopolitical factors limit China’s access to investment targets in some foreign locations, this can make a difference to the geographical distribution of global growth. The pandemic has accelerated these tendencies, not least because of China’s ability to cope with the virus and the apparent resilience and recovery of its economy. In addition, it has disrupted regional supply chains, thereby cutting some of the links between China and her Asian neighbours, even as border tensions have increased.

Stock markets are never the best indicators of the health of an economy, but they do provide some idea of how investors view the current state and possible future trajectory. Further, governments everywhere are obsessed with stock market performance, seeing it (falsely) as a sign of economic success and a referendum on their economic policies. Therefore, governments typically do whatever they can to bolster it.

Figure 3 shows that since the beginning of 2020, China’s stock market index first fell and then recovered to scale heights well beyond those since the start of 2019. By contrast, the average stock market performance of the rest of the region showed a much greater slump during the COVID-19 spread, and despite some recent increase, were still around 10 percentage points below the value at the start of the year. Now that the pandemic is refusing to recede in some large countries like India and showing signs of resurgence of infections in other countries, this is likely to affect stock market behaviour as well, so that this differential performance across China and other developing Asian countries is likely to widen.

Real exchange rates can partially neutralise what seem to be a loss of competitiveness. But they too show differential trends across Asian countries.

In China, as expected, the recent appreciation reflects the renewed increase in current account surpluses after a period of decline, which counterbalanced the recent net capital outflows. But this does not help India as much as it may benefit some other Asian countries.

In India both current and capital account deficits were sought to be counterbalanced by open market operations of the central bank to prevent disorderly depreciation, but the nominal exchange rate nevertheless depreciated.

The real exchange rate, however, appreciated in the recent period essentially because inflation rates were higher than in India’s trading partners. As compared to this, in Indonesia and Thailand there have been fairly significant real devaluations. COVID-19 is drawing a sharp wedge not only between China and the rest of the world, but also between China and its hinterland. It is yet to be seen how this will play out both geopolitically and in economic terms.