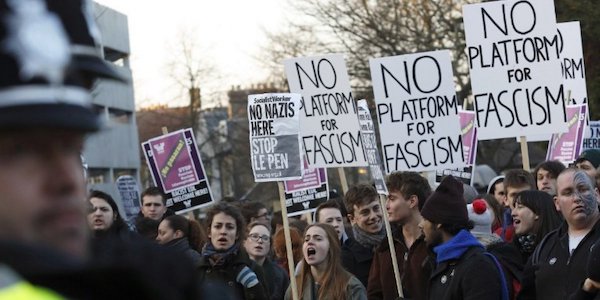 In the 1930s they called it ‘jumping the pitch’. In October 1936 around 100,000 protesters prevented Oswald Mosley’s fascists from marching through a Jewish quarter of the East End of London, in what became known as the Battle of Cable Street. Two years earlier, left-wing activists had bravely infiltrated and disrupted a large gathering of the British Union of Fascists at the Olympia exhibition centre in West London, drawing a thuggish response from the assembled blackshirts. These mobilisations inspired the anti-fascist student activists of the post-war years, as they sought to prevent far-right extremists from gaining a foothold in campus life.

‘No platforming’ was formally adopted as a policy by the National Union of Students in 1974 to counter the threat posed by the National Front. Originally conceived to apply only in relation to overt fascism, it was extended to cover sexist and homophobic hate speech in the 1980s. As Evan Smith explains in No Platform, ‘The logic behind this position is that speakers that… argue for the denial of rights to certain groups of people should not have the opportunity to publicly speak, recruit and organise on campus.’ The NUS ‘saw these forms of speech as precursors to acts of violence, which required a pre-emptive response’.

The terms of the debate haven’t changed much in almost a century. Mosley’s BUF had portrayed themselves as victims–decent patriots whose right to free speech was being trammelled by the left–and this has been the refrain of every fascist, and every fascist-enabling contrarian, ever since. The language of grievance features prominently in their laments. When students published an open letter objecting to what they saw as his glorification of the British empire, the theologian Nigel Biggar claimed this amounted to ‘collective online bullying’; Nigel Farage has gone so far as to denounce anti-racism as ‘the real modern fascism’.

The issue of free speech in universities has been something of an obsession for the Tory press in recent years, with the Times and Telegraph publishing a litany of alarmist articles about the oppressively intolerant atmosphere of campus culture. David Cameron’s Conservative government was sufficiently concerned to convene a joint committee on human rights to look into the matter. The inquiry, launched in 2017 by then universities minister Jo Johnson, was a damp squib: its report concluded that ‘press accounts of widespread suppression of free speech are clearly out of kilter with reality… the narrative that “censorious students” have created a “free speech crisis” in universities has been exaggerated.’

A glance over several of the 21st- century’s more high-profile ‘free speech’ controversies bears this out. When the Oxford Union invited the holocaust denier David Irving and then British National Party leader Nick Griffin to take part in a debate in 2007, anti-fascist students staged a vociferous demonstration but the event went ahead.

In 2015, thousands signed a petition objecting to Germaine Greer being invited to address students at the University of Cardiff, on account of her views on trans issues; the university administration didn’t prevent her from speaking, and the furore even earned Greer a spot on BBC2’s Newsnight. More recently, when the Canadian academic Eric Kaufmann gave a talk at Bristol University in April 2019, the 30-odd students who believed him to be a crypto-racist didn’t stop him from speaking–they simply walked out, as was their right. A pattern emerges. At worst, speakers were being inconvenienced and heckled; they were not being gagged. This was democratic dissent, not censorship. No Platform is more of a monograph than an intellectual disquisition. Rather than dissecting the ethical and philosophical dilemmas thrown up by no- platforming, Smith restricts himself to a factual chronology of several decades of campus activism. It makes for a valuable–if slightly dry–introduction to the subject.

The book contains an illuminating section about Spiked, the digital magazine that has been a tireless belligerent in the so-called ‘culture wars’ on race, identity and political correctness. Smith traces its origins in the Revolutionary Communist Party, a Trotskyist organisation which, throughout the 1980s, opposed no-platforming on strategic grounds, arguing it was a distraction from the more important fight against state racism. The party dissolved in 1997 but its journal, Living Marxism, persisted until 2000, when it folded after losing a libel case. The publication was resurrected as Spiked, retaining many of the same contributors. Somewhere along the way their political convictions drifted away from social justice and towards libertarian contrarianism, with a particular fixation on free speech. Today the publication receives funding from the right-wing, climate change-denying Koch brothers, and its editorial stance is skewed accordingly. Any semblance of leftism has been abandoned, except for the purposes of rhetorical bluster: the magazine’s editor, Brendan O’Neill, often invokes the presumed social conservatism of the entire working class to legitimise his chauvinistic diatribes.

If the free speech crisis in universities is largely imaginary, why then does it loom so large? The answer is that, for right-wing politicians and hacks alike, it is expedient: fostering a sense of victimhood–of an embattled silent majority under attack from a fanatical left–is integral to the modus operandi of right-wing populism. Never mind that, in so doing, they help fuel paranoid resentment that has inspired far-right terrorist atrocities from Norway to New Zealand. It’s a vote-winner.

In June it was revealed that Boris Johnson, keen to distract attention from his government’s catastrophic handling of the coronavirus pandemic, plans to launch a ‘war on woke’. What precisely this will entail remains to be seen but it’s safe to assume it won’t be good. Against the backdrop of the Black Lives Matter protests, Johnson’s recent appointment of Munira Mirza–a Spiked contributor with a track record of belittling anti-racism groups–to lead a commission to investigate racial inequality amounts to a sneering joke. It is likely a sign of things to come. As the Conservative government struggles to deal with an economic crisis of world-historical magnitude, some good old-fashioned scapegoating will be just the tonic.

This article originally appeared in issue #229 ‘No Return to Normal’.