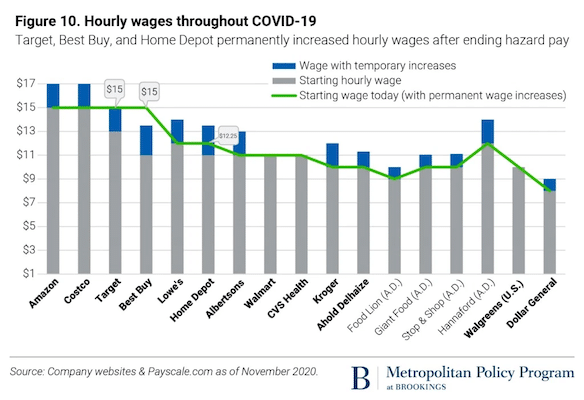 It wasn’t that long ago that the country celebrated frontline workers by banging pots in the evening to thank them for the risks they took doing their jobs during the pandemic. One national survey found that health care workers were the most admired (80%), closely followed by grocery store workers (77%), and delivery drivers (73%).

We cannot thank and appreciate our associates enough. What they have accomplished in the last few weeks has been amazing to watch and fills everyone at our company with enormous pride. America is getting the chance to see what we’ve always known–that our people truly do make the difference. Let’s all take care of each other out there.

Driven by a desire to burnish their public image, deflect attention from their soaring profits, and attract more workers, many of the country’s leading retailers, including Walmart, proudly announced special pandemic wage increases and bonuses. But as a report by Brookings points out, although their profits continued to roll in, those special payments didn’t last long.

There are three important takeaways from the report: First, don’t trust corporate PR statements; once people stop paying attention, corporations do what they want. Second, workers need unions to defend their interests. Third, there should be some form of federal regulation to ensure workers receive hazard pay during health emergencies like pandemics, similar to the laws requiring time and half for overtime work.

The companies and their workers

In Windfall Profits and Deadly Risks, Molly Kinder, Laura Stateler, and Julia Du look at the compensation paid to frontline workers at, and profits earned by, 13 of the 20 biggest retail companies in the United States. The 13, listed in the figure below, “employ more than 6 million workers and include the largest corporations in grocery, big-box retail, home improvement, pharmacies, electronics, and discount retail.” The seven left out “either did not have public financial information available or were in retail sectors that were hit hard by the pandemic (such as clothing) and did not provide COVID-19 compensation to workers.”

Pre-pandemic, the median wages for the main frontline retail jobs (e.g., cashiers, salespersons, and stock clerks) at these 13 companies generally ranged from $10 to $12 per hour (see the grey bar in the figure below). The exceptions at the high end were Costco and Amazon, both of which had a minimum starting wage of $15 before the start of the pandemic. The exception at the low end was Dollar General, which the authors estimate had a starting wage of only $8 per hour.

Clearly, these companies thrive on low-wage work. And it should be added, disproportionately the work of women of color.

Women make up a significantly larger share of the frontline workforce in general retail stores and at companies such as Target and Walmart than they do in the workforce overall. Amazon and Walmart employ well above-average shares of Black workers (27% and 21%, respectively) compared to the national figure of 12%.

Then came the pandemic

Eager to take advantage of the new pandemic-driven business coming their way, all 13 companies highlighted in the report quickly offered some form of special COVID-19-related compensation in an effort to attract new workers (as highlighted in the figure below).

Commonly referred to as “hazard pay,” the additional compensation came in the form of small, temporary hourly wage increases, typically between $2 and $2.50 per hour, as well as one-off bonuses. In addition to temporary hazard pay, a few companies permanently raised wages for workers during the pandemic.

Unfortunately, as the next figure reveals, these special corporate payment programs were short-lived.  Of the 10 companies that offered temporary hourly wage increases, 7 ended them before the beginning of July and the start of a new wave of COVID-19 infections. Moreover, even with these programs, nine of the 13 companies continued to pay wages below $15 an hour. Only three companies instituted permanent wage hikes.  While periodic bonuses are no doubt welcomed, they are impossible to count on and of limited dollar value compared with an increase in hourly wages. So much, for corporate caring!

Don’t worry about the companies

As the next figure shows, while the leading retail companies highlighted in the study have been stingy when it comes to paying their frontline workers, the pandemic has treated them quite well.  As the authors point out:

Across the 13 companies in our analysis, revenue was up an average of 14% over last year, while profits rose 39%. Excluding Walgreens—whose business has struggled during the pandemic—profits rose a staggering 46%. Stock prices rose on average 30% since the end of February. In total, the 13 companies reported 2020 profits to date of $67 billion, which is an additional $16.9 billion compared to last year.

Looking just at the compensation generosity of the six companies that had public data on the total cost of their extra compensation to workers, the authors found that the numbers “paint a picture of most companies prioritizing profits and wealth for shareholders over investments in their employees. On average, the six companies’ contribution to compensating workers was less than half of the additional profit earned during the pandemic compared to the previous year.”

This kind of scam, where companies publicly celebrate their generosity only to quietly withdraw it a short time later, is a common one. And because it is hard to follow corporate policies over months, they are often able to sell the public that they really do care about the well-being of their workers. That is why this study is important—it makes clear that relying on corporations to do the “right thing” is a losing proposition for workers.