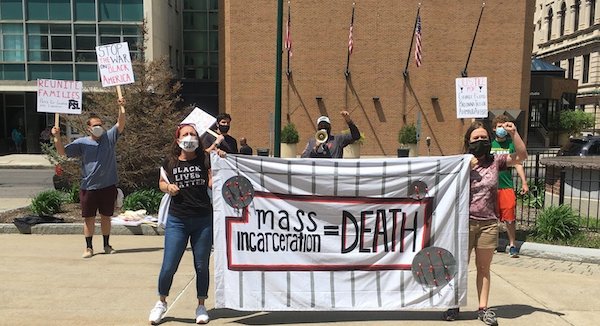 Over the past week, 14,697 new cases of Coronavirus infection were reported inside of state and federal prisons — the highest level since the pandemic began. People incarcerated in Michigan and Wisconsin prisons in particular suffered exceptionally high numbers of new infections. As the number of new COVID cases increases, inevitably so too will deaths.

As if the squalid conditions inside of prisons weren’t evidence enough that authorities have no regard for the lives of incarcerated people, the Associated Press obtained a document from the federal Bureau of Prisons saying that the first shipments of vaccines that become available “will be reserved for staff.” According to this report, it is official government policy that prisoners are to be left to suffer and die so that their captors can go to work safe and secure.

Prison system unable and unwilling to deal with pandemic

The United States currently has the largest incarcerated population in the world with a total of 2.3 million imprisoned,  and the most people incarcerated per capita in the world. This has led to massive overcrowding and shortages of resources for inmates, which has been exacerbated by the COVID-19 crisis. In total, 197,659 cases nationwide have been detected among prisoners by Nov. 17. The number of positive cases, however, are assumed to be higher than reported. Inmates have a higher risk of mortality than the general population as 38-42 percent have chronic health problems, which was discovered to contribute to the severity of COVID-19 infection.

Furthermore, about 40 percent of prisons are located in rural communities with a population of less than 50,000. While the government tries to build support among these communities for the prison system by demagogically arguing that it is a major job creator, penitentiaries have functioned as super-spreaders of the virus in rural towns, which have far less healthcare infrastructure in place than metropolitan areas. An outbreak in such communities can completely overwhelm their ability to provide care. The prisons’ high infection rates also pose a risk for inmates’ families and communities.

Prisons lack medical equipment and supplies to adequately treat infected individuals or contain the spread of a highly infectious virus. Additionally, CDC protocols are also not tailored to fit overcrowded prison conditions where inmates generally share living, eating, recreational and showering spaces and cannot adhere to social distancing. While segregation can reduce the risk of spread, it comes with emotional and psychological stresses that may worsen the condition.

Adding to this precarious situation is the ongoing exploitation of prison labor. The prison population serves as a reserve of workers that are made to perform often dangerous tasks with pay as little as a few dollars per day, and this practice has continued during this pandemic. For example, incarcerated women at the California Institution for Women sewed masks using fabrics from a nearby men’s prison with a COVID-19 outbreak. They were also not allowed to use any of the protective gear they manufactured to protect themselves. Similarly, inmates at Rikers Island were offered $6 per day to dig mass graves, and more recently, El Paso County jail inmates were being paid $2 per day to transport dead bodies into temporary morgues.

Prisoners and other activists fighting mass incarceration have called for early releases to reduce overcrowding and stop the uncontrolled spread of the virus. A New Jersey bill allows for early release of prisoners with less than a year remaining of their sentences, and has led to the decarceration of more than 2000 people. But in other areas, Prison Policy Initiative found after analyzing 451 country jails that jail populations are higher now compared to before the pandemic.

This pandemic further exposes the true nature of the prison system as a tool not for rehabilitation, but for social control of poor and oppressed people, especially communities suffering under the boot of white supremacy. The struggle continues to win sanitary conditions in prisons, early releases to relieve overcrowding, and ultimately to smash the system of mass incarceration itself that gives rise to catastrophes like the pandemic raging behind prison walls.