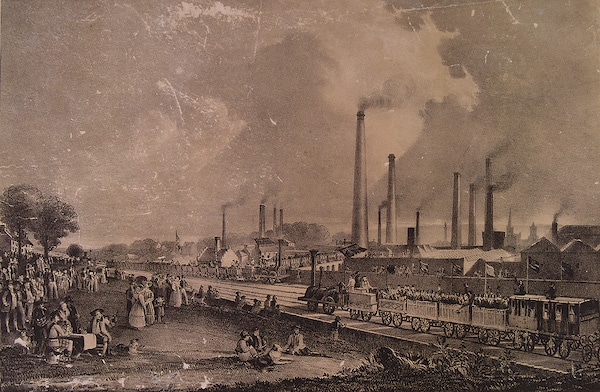 As we’ve seen in previous sections, we have to understand three major theoretical and political currents—classical political economy, Hegel’s philosophy, and utopian socialism—in order to understand the path Marx traversed in his writings prior to working on Capital. We also have to keep in mind the larger context, the development of capitalism in the nineteenth century.

It was during the “age of capital,” as the illustrious British historian Eric Hobsbawm aptly called it, that Marx formulated his critique of political economy. By the time he landed in London (in 1849), where (after leaving Germany and spending short periods in first Paris and then Brussels) he would remain based for the rest of his life, England had become the epicenter of capitalism.

Today, we think of capitalism as encompassing the entire world.* That certainly wasn’t the case in the first half of the nineteenth century, when most economic and social life around the globe was organized along decidedly noncapitalist lines. In England, however, by the end of the first Industrial Revolution, capitalism was well established, especially in the burgeoning cities (such as London, Liverpool, Manchester, and Birmingham). More or more, both consumer goods and producer goods (from textiles to machinery) were being produced in capitalist factories. In other words, they had become capitalist commodities, created by laborers who received a wage working for the capitalists who owned the mills and workshops.**

Elsewhere, the transition to capitalism, while less advanced than in England, was also taking place and leaving its mark on the existing social order. For example, the conditions and consequences of capitalism were quite evident in France and Belgium, much more so than in Germany; while the United States, as it slid toward civil war, was also creating a hothouse for capitalist industry, especially in the northeast. In all those places, enormous fortunes (accumulated through merchant profits and rent on large estates) were utilized to purchase the ability to labor of workers (many of them former feudal serfs, self-sufficient farmers, and artisans) as well new technologies and machinery (from the power loom and cotton gin through steam power and iron-making to new modes of transportation, such as canals and railroads).

The age of capital was nothing less than a project for remaking the world, in every dimension. It was a revolution in industrial production that, as Engels wrote in his classic study of The Condition of the Working Class in England, was changing the whole of civil society—from politics and culture to class structure and the organization of work.

Then as now, the captains of industry and supporters of capitalism were confident about their project. It promised to create general prosperity and to universalize the bourgeois individual guided solely by self-interest and rational calculation. And, in many ways, it succeeded. The development of capitalism created gigantic factories, titanic temples of industrial production, and colossal cities, occupied by an escalating number of native and immigrant workers. Traditional ways of life and meaning were cast aside and new habits acquired, with an eye (at least among the middle and upper classes) to accumulate individual wealth and extol the virtues of free and expanding markets.

But, by the same token (and no different from today), the new capitalist order was itself fragile—subject to fits and starts and periodic downturns, and characterized by obscene levels of inequality and widespread misery. The bulk of the population experienced a decline in their living standards, with wages that didn’t keep pace with the prices of necessary consumer goods, plus poor sanitation, inadequate housing, and precarious access to clean water. Moreover, their jobs and skills were threatened by the combination of technological change, embodied in the new factory machinery, and the more detailed divisions of labor that could be instituted once they were collected to labor in one place. In many instances, workers became mere appendages of the machines they once managed. That meant more profits for their employers but, in relative terms, less for their wages. 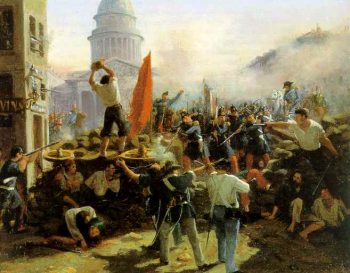 It should come as no surprise, then, that the capitalist project was contested wherever it took hold. Many readers will have heard of the Luddites, a radical faction of English textile workers that attempted to destroy factory machinery as a form of protest. To be clear, they were not hostile to machinery per se, but were angry with manufacturers who introduced the machines in what they called “a fraudulent and deceitful manner” to get around standard labor practices. This period also saw the resurgence of other labor organizations, especially trade unions (such as Robert Owen’s short-lived Grand National Consolidated Trades Union) and the demand for more democracy (a working-class suffrage movement led by the Chartists)—which, in their growing influence, led to the repeal of laws that had made any sort of strike action illegal.

The development of capitalism led to even more widespread political upheavals, culminating in 1848, during what Hobsbawm refers to as the “springtime of the peoples.” That year was painted with the colors of revolution across continental Europe (except England and Russia) and beyond. Government after government was overthrown and, in the end, over 50 countries—from Sweden to Colombia—were affected. The revolutions were informed by diverse ideologies, including various forms of liberal democracy and socialism, their banners carried by the new social classes created by capitalism, including members of the grand bourgeoisie, their intellectuals, and the middle classes to the masses of rural landless laborers, urban artisans, and industrial workers. In the end, while the revolutions eventually failed and the old regimes restored started in 1849 (Marx argued, in various speeches and newspaper articles, the revolutions were betrayed by many of the liberal intellectuals, who sought an accommodation with the monarchs and governments on their own terms), it was clear that all that was considered solid was melting into thin air.***

It was in the maelstrom of this age of capital—of the widening and deepening of capitalism and of the revolutionary upheavals it provoked—that Marx pursued his “ruthless criticism of everything existing.”

In the next section, we look at some of his best-known texts of that period, prior to the writing of Capital.

*That’s certainly how mainstream economists and many others think of capitalism, as characterizing the entire economy in pretty much all places around the globe. As we will see in a later chapter, what they forget or overlook is that many parts of contemporary society, in rich and poor countries alike, include various forms of noncapitalism. Consider for the moment one prominent example: how many households, where of course a great deal of labor is performed on a daily basis, are based on a capitalist mode of production?

**As we will see later in this book, not every commodity is a capitalist commodity. Goods and services can be bought and sold in markets without the existence of capitalism. It all depends on how they are produced. Thus, there can be communist commodities, slave commodities, feudal commodities, and so forth. The mistake mainstream economists make is to presume that markets are synonymous with capitalism.

***This is a paraphrase from one of the most famous texts of 1848, The Manifesto of the Communist Party, which Marx and Engels were commissioned to write by the Commiunist League and originally published in London just as the revolutions of 1848 began to erupt:”All that is solid melts into air, all that is holy is profaned, and man is at last compelled to face with sober senses his real conditions of life, and his relations with his kind.” We will discuss the Communist Manifesto in more detail in chapter 9.