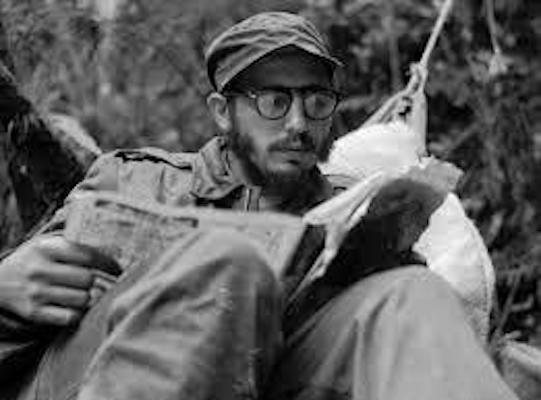 “We do not tell the people: believe. We say: read,” a statement not made casually, but rather a public expression of a very deep conviction, spoken by Fidel on April 9, 1961 during a television appearance that ended the sixth cycle of the People’s University, Education and Revolution.

The National Literacy Campaign was underway across the country. A few days later, the mercenary Bay of Pigs invasion, organized and financed by the United States took place and was defeated in less than 72 hours. The aggression did not interrupt the enormous pedagogical effort. With a vast audience listening, recorded was Fidel’s message that summarized in good measure the core of the cultural and educational policy of the new times: “The Revolution tells the people: learn to read and write, study, get information, meditate, observe, think. Why? Because this is the path of truth…” Comandante en Jefe said, at the time.

He himself had found truths and nurtured his spirit in books and reading. As the leader of an unprecedented process of transformation in a country permanently besieged by the United States, he was obliged to confront and assimilate enormous amounts of information on a daily basis.

In 1985, he explained to the Brazilian journalist Joelmir Beting:

Every day I spend an hour and a half reading international cables, from almost all agencies. If I read that a new innovative and very useful drug or medical device has been discovered in some country, I send for quick information.

But his reading horizons went far beyond the boundaries of immediacy and practical requirements. In introducing the first edition of An Encounter with Fidel, by Italian communicator Gianni Miná, Gabriel García Márquez, a close friend of the Comandante, wrote: “Perhaps the aspect of Fidel Castro’s personality that does not fit the image created by his adversaries is that of being a voracious reader. No one can explain how he finds time for reading, or what method he uses to read so much, so quickly, although he insists that he has none in particular. In his cars, beginning with the prehistoric Oldsmobile and the successive Soviet Zil models to the current Mercedes, there has always been a light so he can read at night. Many times, he has taken a book with him in the early morning and the next morning he’s commenting on it.” This real image was corroborated by Fidel himself in a confession:

I suffer when I review a list of titles of all kinds and regret not having my whole life to read and study.

History, politics, biographies, science and economics were among his literary interests. In the first place, the work of José Martí, his paradigm. Another of his great friends, Brazilian Frei Betto, said that when he traveled to Cuba, he used to give Fidel books on cosmology and astrophysics. But he also read fiction and even remembered diving into the pages of María, the novel by Colombian Jorge Isaacs, and Werther, by German Goethe.

As is well known, after the Moncada assault and the trial in which he became the accuser, he was imprisoned on the Isle of Pines. Reading was his productive occupation during this time. He asked for books and shared readings with his companions.

In one of his epistolary exchanges with relatives and friends written in the Model Prison, he wrote:

I crave a book, Cecilia Valdés, by Cirilo Villaverde. Years ago I did not pay any attention to it and today I am anxious to read it. I have lived happy days, enraptured, forgetting everything, practically transferred to the last century, in the pages of such a formidable history as Cuba’s.

The German thinker and revolutionary Federico Engels left testimony of how he “learned more about bourgeois society and capitalism by reading Balzac’s novels than I did with the group of professional historians, chroniclers and statesmen of his time.” Karl Marx understood England’s leap to the stage of industrial capitalism after immersing himself in the novels of Charles Dickens, Charlotte Bronté and a writer who should be rediscovered, Elizabeth Gaskell, author of Mary Barton.

Fidel’s revealing re-encounter with a major work of 19th century Cuban literature allowed him a fuller appreciation of our colonial past and the conflict between slave owners and slaves that led to the course of events that followed: abolition, the wars of independence and the birth of the republic, frustrated by imperial interference.

“I want to confirm this time, via someone so superbly portrayed that era, some living aspects of the Cuban mentality,” wrote Fidel when rereading Cecilia Valdés. He thus confirmed the great interest he had in unraveling the tangled subjectivity involved in the forging and evolution of our identity.

Reading as a source of knowledge and intellectual pleasure. This is how Fidel understood it and wanted this habit to be active patrimony of the spiritual life of his compatriots. In times of new technologies, of digital platforms, of transition from the Gutenberg galaxy to cyberspace, we must foster this irreplaceable passion.

In one of his frequent visits to the International Book Fair of Havana, a multitudinous cultural festival he encouraged, someone asked him if he thought the printed word would go out of style:

No, I think the last thing that will remain will be the book. Make sure, if it doesn’t die, that The Iliad and Odyssey are still read.